The Call for Submissions is Open for the Verzió Film Festival 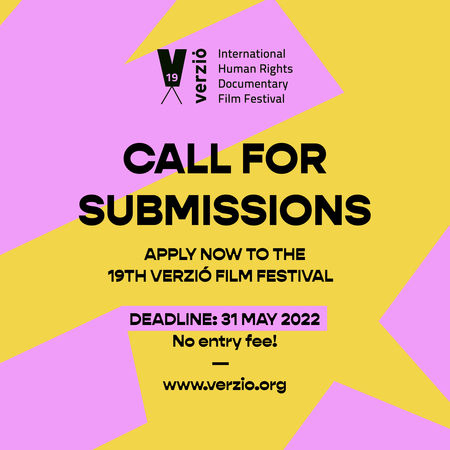 The 19th Verzió International Human Rights Documentary Film Festival will be held November 8–16, 2022, in art cinemas in Budapest and in cities across Hungary. Applicants can submit their documentary films until May 31, 2022. The films would fall into one of three categories: International, Student & Debut Film, or the Hungarian Competition while addressing the latest human rights and social issues. Submissions can be entered free of charge.

The Verzió International Human Rights Documentary Film Festival is the oldest and most prestigious documentary film festival in Hungary; it has been held in Budapest every November since 2004, was founded by colleagues of Blinken OSA Archives, and has enjoyed a presence in Kecskemét, Pécs, Szeged, Debrecen and Szombathely for several years now. The festival showcases the best creative documentaries to an increasingly wide and diverse audience and creates a forum to discuss current social issues relevant to the given films and professional programs.

Entries are accepted in three categories. The International Competition is a collection of documentary films from across the globe focusing on human rights and social issues. The winner of the Best Human Rights Film Award will be chosen from the International Competition by the Student Jury, consisting of international university students. The Student & Debut Film Competition for graduate projects and debut films is also centered around human rights and social issues. It is judged by an international panel of renowned experts who take into account the films’ professional excellence and creative approach to the chosen subject. The Hungarian Competition, judged by a professional international jury, is open to documentary films produced entirely or partially in Hungary.

The winners in all three categories receive a monetary prize.

●    Submissions are free.
●    A film can only be submitted to one category.
●    Applicants may submit multiple titles.
●    There are no restrictions regarding the year in which the film was made.
●    Films previously entered may not be resubmitted.
●    Films that are not in English are expected to be submitted with English subtitles.
●    Submission deadline: May 31, 2022
●    Notification deadline: September 2022

Submit your film through the Verzió website:https://www.verzio.org/en/2022/submission