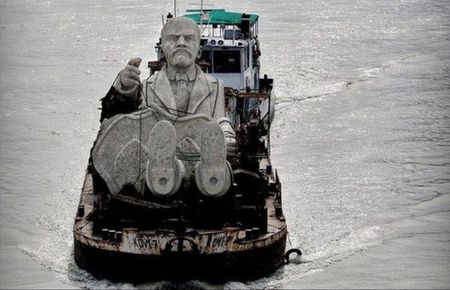 On the 100th anniversary of the Great October Socialist Revolution, Blinken OSA presents a unique program series under the title "The Traces of Revolutions". In Blinken Osa's Galeria Centralis László Rajk's installation will be complemented by a historical exhibition, a student debate is organized about the revolution, the experiment of communism will be discussed at a conference. A film screening series will reflect upon the era, and a play by Heiner Müller (Mauser) will be staged, with Eszter Csákányi, Dávid Csányi, Gergő Kaszás and Blanka Mészáros appearing in the leading roles.

November 16, 2017, 6:00–7:30 p.m.
Storming of the Winter Palace (Nikolai Evreinov, 1920) with an introduction by Yuri Tsivian (University of Chicago) and Daria Khitrova (Harvard University)

10,000 actors, dancers, and circus performers, as well as a convoy of armored cars and tanks presented in and around the real Winter Palace in Petrograd. The Storming of the Winter Palace is a filmed reenactment of the October Revolution in Petrograd, organized by Nikolai Evreinov to commemorate the 3rd anniversary of the revolution. This mass spectacle- referred to by many as a boldly grotesque avant-garde enterprise - created a new kind of theater, agit-drama: telling the viewer about the creation of the event and spreading political propaganda at the same time. The director worked together with Yuri Annenkov, graphic artist and painter and Dimitri Tiomkin who later became an Oscar-winning Hollywood composer.

Described by the director as "the first embryonic step towards a totally new form of film expression", October was and remains a film of multiple challenges. It is the last installment of Eisenstein's historical-revolutionary film epic, which began with the films Strike (1924) and Battleship Potemkin (1925). After the international success of Battleship Potemkin, Eisenstein was commissioned to create a film celebrating the tenth anniversary of the Bolshevik Revolution. The director used the occasion to experiment with new ways of editing, which he conceived as intellectual montage. The experimenting also aimed to construct a new authoritative account of recent history by presenting a dramatic and dramatized chronicle of the events leading up to and during the October Revolution. While his version of history was ultimately rejected by the commissioning authorities and the film underwent multiple reediting, it remains an important milestone in film history as well as an early lesson in cinematic memory politics.

A unique perspective of the paradoxical story of the Hungarian Soviet republic of 1919. The historical background – as formulated by impassioned disputes within the "intellectual group" of the party, and by philosophical monologues and archival footages – serves more as an excuse to search for a general model of revolution, which can be applied to later 20th century examples of revolution (1956 and 1968).