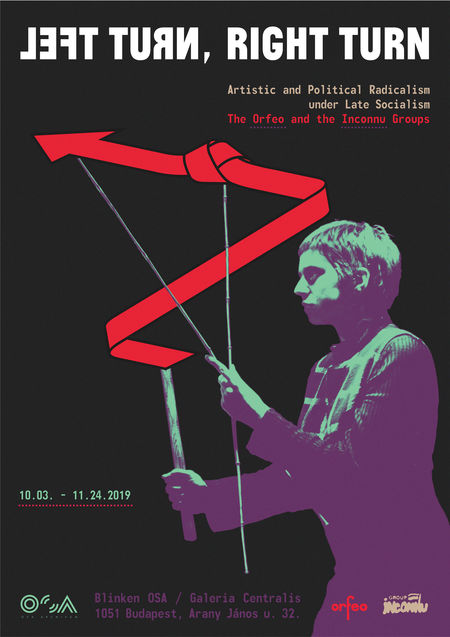 Left Turn, Right Turn examines the social and political context of groups which, because of their artistic and political programs, were drawn either towards the left, or towards the right in their criticism of socialism as it actually existed. The Orfeo group emerged in the wake of the global movements of 1968, while the Inconnu group’s career was profoundly shaped by the underground artistic trends of the 1970s, later turning towards the politics of the dissident groups of the 1980s. Both Orfeo and Inconnu attempted to merge artistic criticism with political radicalism. By comparing and contrasting the activities of the two groups, the exhibition sheds light not only on anti-system radicalism, but also on the dominant doctrines, ideologies and mechanisms of the era. By showing the differences and similarities between the Orfeo and Inconnu groups, the exhibition reveals the social and institutional conditions of radical artistic criticism of the Kádár regime.

The histories of the Orfeo and Inconnu groups show that we should avoid imagining cultural opposition under state socialism in terms of a dichotomy between dissident and official tendencies and institutions. The two cases reveal that the interrelations of cultural institutions, politics and artists were both complicated and contingent. The Orfeo group was considered by the cultural authorities as the new generation of socialist artists until the smear campaign launched against them in 1972. At the same time, the members of the Inconnu group could occasionally access parts of the public education infrastructure, such as houses of culture, community centers and clubs, despite their continuous political and artistic radicalism.

The exhibition organizes the histories of the two groups around four nodes that were of defining significance for both of them in their everyday practices. We compare the two groups’ careers through their attempts to merge art and life; their ideological and political principles; their chosen or obligatory relationship with amateur art, and their gender relations. These perspectives show the origins of the two groups’ radicalism, their relationship with the socialist state, and the factors that shaped their histories after they fell apart. After the groups dissolved, their former members followed very different paths. While some former members of Orfeo found their home in liberal cultural-political circles, one of its founders, István Malgot acted as an advisor to Fidesz until 2004. At the same time several founders of Inconnu continued their activities on the right of the political spectrum, and their re-establishment of the group in 2002 gave it a clear right-wing character.

The similarities and differences between the two groups’ careers are far from being mere historical curiosities. The story of young artists being radicalized, turning against the system and clashing with the state and the rules of the art establishment is a well-known pattern that not unique to Hungary. Sooner or later, in most cases, such artists will either be suppressed by the state apparatus, or be incorporated by it, since without proper material resources resistance cannot continue forever. However, it is important to realize that resistance and compromises do not arise from the moral strength or weakness of the individual artists, but rather from the logic of the system, and this overview of the Inconnu and Orfeo groups aims to reveal precisely this logic.

The exhibition will be opened by Anna WESSELY, sociologist, art historian, President of the Hungarian Sociological Association.