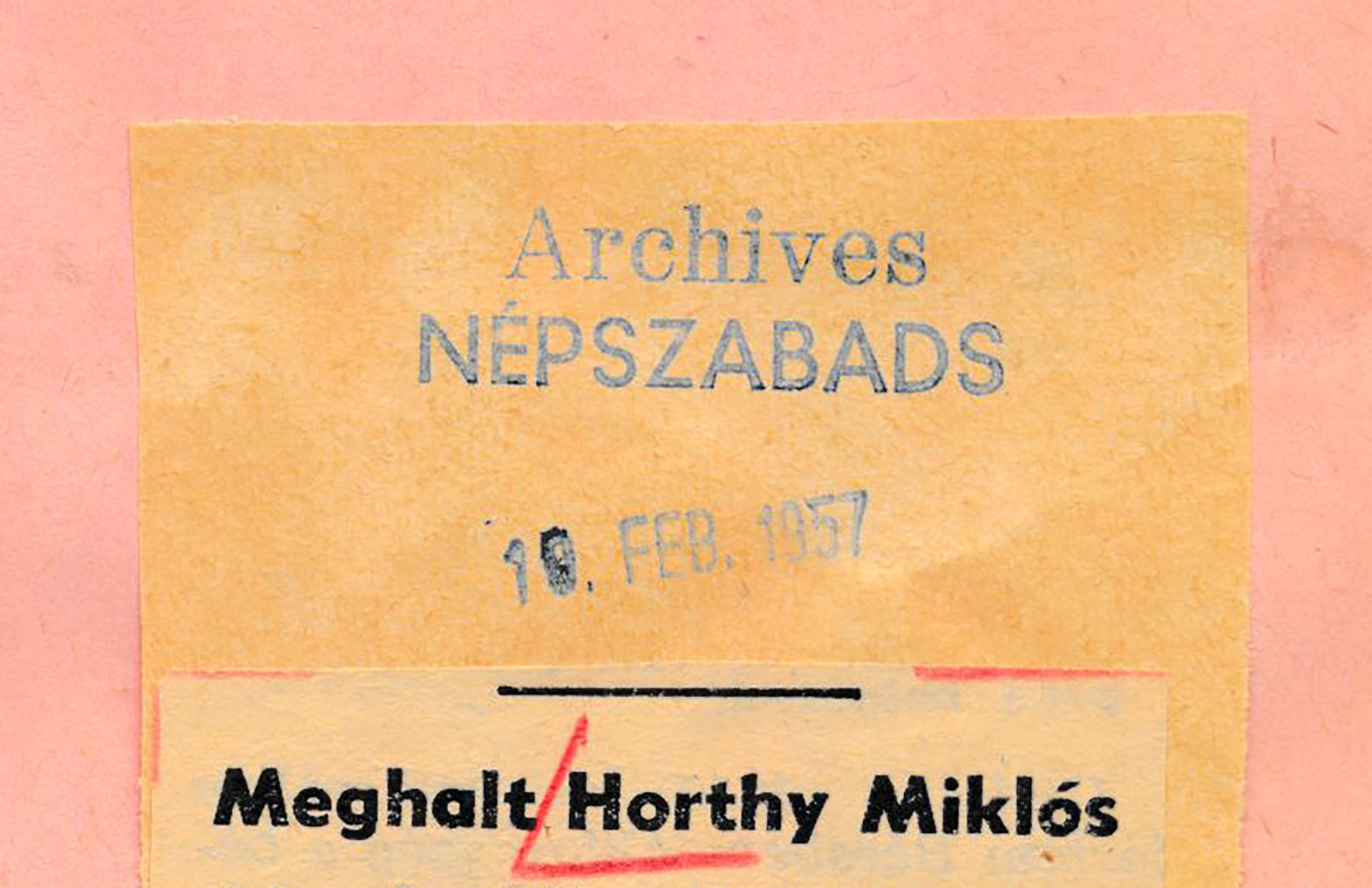 Miklós Horthy passed away in Portugal on February 9, 1957, 65 years ago today. We revisit contemporary press reactions through his Biographical File compiled at the RFE/RL Research Institute. The operations of Radio Free Europe/Radio Liberty (RFE/RL), to broadcast across the Iron Curtain in Eastern Bloc countries, was assisted by its own Research Institute. Its staff monitored and analyzed the state propaganda of Socialist countries, producing press clippings and verbatim radio transcripts, and gathered information through unofficial channels. These, complemented with Western news agency releases and journalism, were compiled into Subject Files or Biographical Files. As a result (or by-product), the RFE/RL Research Institute captured a peculiar image of the Cold War.

Forrás. [Source., or Boiling point] is a blog series by the Blinken OSA staff at the Hungarian news website 444.hu. This post commemorating the 65th anniversary of Miklós Horthy’s death originally appeared on osaarchivum.444.hu.

At the Hungarian Office of RFE/RL, information on Miklós Horthy were sorted into a separate Biographical File, providing now a horizontal view over Western and Eastern obituaries published in 1957, following the former governor’s death.

Press clippings from the Biographical File on Miklós Horthy, including the news item in the February 10, 1957 issue of Népszabadság.
(HU OSA 300-40-1 Records of RFE/RL Research Institute, Subject Files)

Unsurprisingly, four months after suppressing the 1956 Revolution, the Hungarian press was not keen on discussing the event; although the party daily Népszabadság (People’s freedom) did report the death of “the former leader of the Hungarian counterrevolution,” the short item only appeared on page 9 of the February 10 issue, among international news. The piece highlights that it was Horthy, who drew Hungary into World War 2, during which the country became Germany’s “last henchman”; then, in 1956, in the “second counterrevolution,” Horthy attempted to have a part again.

Press clippings from the Biographical File on Miklós Horthy, including the obituary in the February 14, 1957 issue of Trybuna Ludu.
(HU OSA 300-40-1 Records of RFE/RL Research Institute, Subject Files)

A more detailed, yet similar obituary was published by the Polish central daily Trybuna Ludu (People’s tribune), titled “Kariera kontrrewolucjonisty” (Counterrevolutionist career). With the help of the “Entente interveners,” Horthy rose to power in 1919, and White Terror swept through the country, killing tens of thousands of workers, imprisoning 70,000, forcing the Communist party underground. The allegedly “free” elections were won by the Right, on March 1, 1920, Horthy was elected Governor. “In Hungary—which did not know bourgeois democracy in its development—Fascist dictatorship triumphed.” Horthy pursued a consistently anti-Soviet politics, collaborated with Mussolini’s Italy and Hitler’s Germany. Occupying the entire Transcarpathian Ukraine did not satisfy his “revisionist appetite,” according to the Polish daily; he obtained northern Transylvania, and Hungary took part in the German attacks against Yugoslavia and the USSR during WW2. After the Germans occupied Hungary in March 1944, and the Soviets entered its territory in October, Horthy “handed over power to an open Nazi agent,” Szálasi.

Press clippings from the Biographical File on Miklós Horthy, including the obituary in the February 11, 1957 issue of the Manchester Guardian.
(HU OSA 300-40-1 Records of RFE/RL Research Institute, Subject Files)

Anti-Fascism pervades the obituary published by the Manchester Guardian as well; the piece was even translated by the Hungarian state news agency (MTI), its summary was published in Hungarian newspapers. The newspaper (later renamed The Guardian) accuses Horthy being “a respectable high-ranking façade behind which a reactionary social order stamped out every movement towards freedom.” The unnamed author describes the former governor as having “good presence, savagely reactionary opinions, stupidity almost grotesque, and a wide knowledge of foreign languages with which to win the support of the Entente Powers.” In the article’s interpretation, a White Terrorist movement was formed in Szeged, and a terrorist government in Budapest; yet, Horthy’s charm captivated the West, making it “impossible to believe that this old tarpaulin was the cover for the murder of 10,000 democrats and Jews in Budapest alone.” Horthy, writes the Manchester Guardian, welcomed the rise of the Nazis in Germany, and also their alliance, his figure incorporates everything “that was worst in Hungary: for the old social order, for anti-Semitism, and for Magyar domination over the surrounding peasant peoples. He was the symbol of all that was antiquated and evil in Central Europe, and nothing was lost by his fall.”

Press clippings from the Biographical File on Miklós Horthy, including the obituary in the February 19, 1957 issue of Le Monde.
(HU OSA 300-40-1 Records of RFE/RL Research Institute, Subject Files)

The Süddeutsche Zeitung and the French Le Monde provide more complex portraits. The former, in an obituary titled “Admiral Horthy – ein Schiffbrüchiger dieser Zeit” (Admiral Horthy – a shipwreck of this time), claims that with the Allies’ help Horthy ended the Communist rule’s cruel nightmare, and his figure became a symbol for Hungarians’ desire for freedom. Once elected as Regent of Hungary, however, he “grew more and more into the role of a quasi-monarch,” being regent for life, a constitutional amendment assigning him the rights almost of a ruler, appointing his son István his heir (who died, however, in 1942 in a flying accident). By this time, in the German paper’s view,“ what Hungary represented was a conservative dictatorship,” and its form of government “also increasingly resembled authoritarianism.”

According to the obituary in Le Monde, titled “Horthy, personnage éponyme de la tragédic nationale hongroise” (Horthy, embodyment of the Hungarian national tragedy), Horthy, the “admiral without a fleet who had become king without a crown was of old Magyar aristocratic stock, with the prejudices of his caste, a strong tendency towards anti-Semitism.” The author, in good faith, misinterprets Horthy’s Tatabánya speech he had given in November 17, 1919, attributing to it a notion of solidarity across classes. The piece quotes Horthy saying “I came to look everyone in the eye. Not to receive admiration, homages, or flowers,” and ignores the rest of the speech, which went, however, “but to talk to those still in hiding, those still with the red devil lurking among their ranks. . . . I will crush even the smallest attempts at reviving the red rule will be.” Nevertheless, the French daily concludes that Horthy’s social policy was of the most retrograde spirit.

As far as Le Monde was concerned, history would judge Horthy based on his foreign policy. The storm raging in Eastern Europe forced him into decisions opposing his preferences, and he joined the Axis powers for haphazard speculation, seeking support for his territorial claims. As put by Le Monde, Horthy “betted on the wrong horse, but fairness obliges us to recognize that the geographical situation of his country and the upheaval in Europe made it a singularly difficult game.” Süddeutsche Zeitung arrives at the conclusion that Horthy, “the governor of hopes that could not be fulfilled . . . . had fallen between the millstones. Not just him, but Hungary. Part of Hungary’s destiny is inextricably linked to its geographic position. Horthy, in his own way, must have had an aversion to Hitler, yet he had to engage in Hungarian politics with him, precisely with Hungary’s place on the map in mind. Whether anyone else, a greater statesman than Miklós Horthy de Nagybánya, could have succeeded with dignity—who dares to say with certainty?”