“Mátyás Is Dead, Justice Is Here” 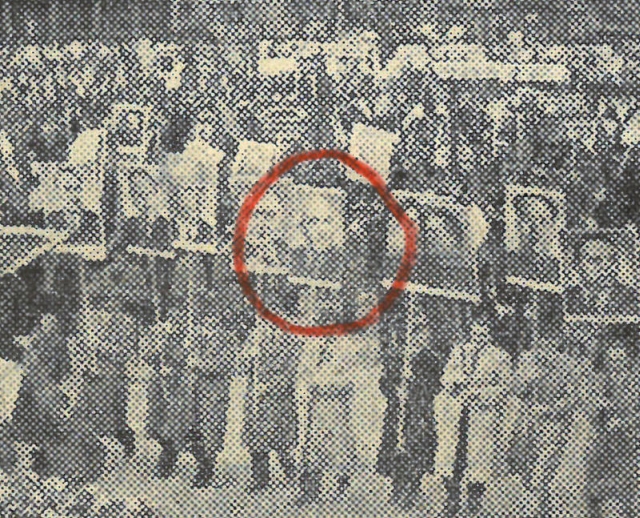 Mátyás Rákosi, the most hated figure of the past hundred, or thousand years of Hungarian history, died fifty years ago today, on February 5, 1971. The history of Hungary is rich in characters who, despite the monstrous crimes they committed or were indisputably responsible for, remain unjustifiably respected or popular even today. Rákosi is a singular exception. In a remarkably short time, he succeeded in turning each and every group or segment of the Hungarian social spectrum against himself; workers, peasants, and the intelligentsia, the traditional middle class and the descendants of the aristocracy, the rich and the poor of the cities and the countryside, right-wing reactionaries, Conservatives, Liberals, the progressive Left, Social-Democrats, even the vast majority of the very Communists loyal to him not long ago.

Forrás. [Source., or Boiling point] is a blog series by the Blinken OSA staff at the Hungarian news website 444.hu. This is a translation of András Mink's post that originally appeared on osaarchivum.444.hu, on the 50th anniversary of the death of Mátyás Rákosi. 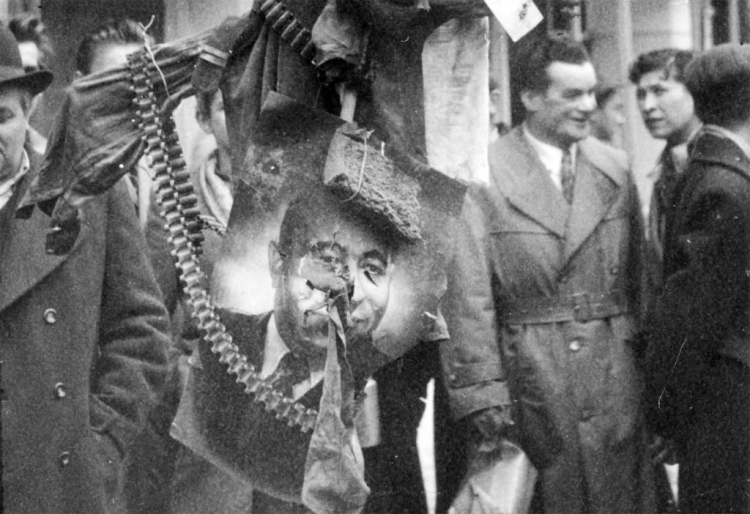 A Rákosi portrait on a makeshift scarecrow in 1956 Budapest.
(Photo: Fortepan / Ádám Klausz)

On the Public Mood toward the Leader

With its headquarters in Munich, the Radio Free Europe (RFE) Research Institute attempted to closely monitor the career and the political activity of Rákosi, the autocratic leader of Hungary between 1947 and 1956, “Stalin's best Hungarian disciple.” A difficult task, since a tightly-sealed informational Iron Curtain also separated Europe’s Western and Eastern parts. Uncovering the political actions of Rákosi was less problematic, as news during his reign were mostly revolved around him. Yet, acquiring news about his private life, which would have provided crucial munition for the counterpropaganda against the regime named after him, faced nearly impermeable barriers. RFE analysts and researchers mostly had to make do with unofficial information provided by refugees arriving from Hungary, witnesses who, one way or another, had been close to Rákosi’s circle. The accounts by refugees coming from the Eastern Bloc were compiled in so-called Information Items. Out of the approximately seventy thousand documents covering the period between 1951 and 1956, more than ten thousand are related to Hungary, but only 115 mention Rákosi himself in any context. The reliability of these Items is questionable, RFE analysts did not recommend their direct use in broadcasts either; accordingly, they cannot serve as the basis of a credible reconstruction of Rákosi’s everyday life. However, as far as the public mood toward the Communist leader is concerned, they indeed are revealing. 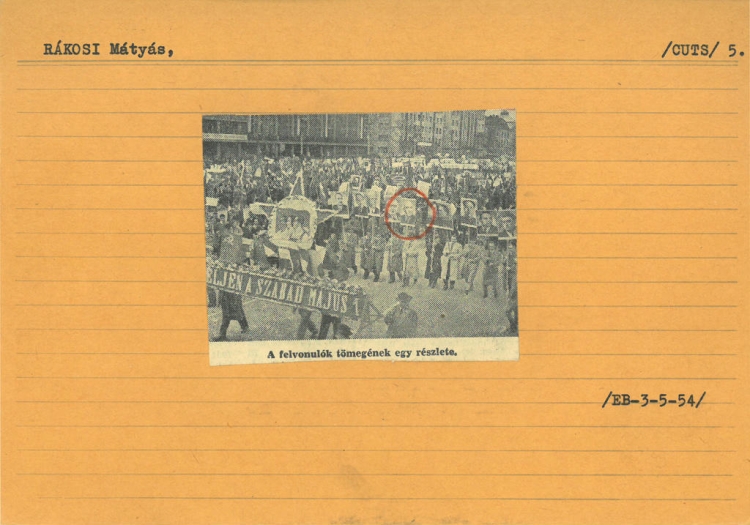 Several of these accounts describe spontaneous manifestations of a general resentment toward the cult of personality around Rákosi. Decorating the waiting room of the Balatonalmádi train station, a bust of Rákosi was vandalized in July, 1952, to the extent that it had to be removed. Later in Győr, according to a May, 1956 Item, inscriptions on the walls of residential and factory buildings called Rákosi “Murderer,” “Beria’s accomplice,” or “Enemy of the Hungarian nation,” and a cartoon depicting Rákosi on a gallows appeared on the fence of the Car and Machine Factory. The Item highlighted that unlike before, when police used to remove such inscriptions almost immediately, these had been on display for weeks, untouched.

Other reports exposed the privilege and luxury Rákosi had access to. One Item claimed that the Rudas Bath had been extended with a private marble bathroom, where the Leader, following doctors’ orders, would receive spa treatments like cupping, water drinking, and thermotherapy twice a week. Doctors believed that the thermal water at the Rudas Bath, supplied by the Juve Spring, was exceptionally effective against Rákosi’s health problems, which may have contributed to the spa’s rapid reconstruction after its destruction during World War II.

A significant number of Items recited the latest jokes on Rákosi. These were also critical of the luxury around him:

The “fairly witty” joke preserved by the 1951 Item above translates as “Rákosi visits the miners of Tata. ’That’s a big truck,’ one miner cries out, pointing at Rákosi’s Buick. ’Comrade, that is no truck,’ Rákosi corrects him, ’but a luxury car.’ To which the miner responds, ’It may be luxury to you, but it's a truckload of burden on us.”
(HU OSA 300-1-2, Records of RFE/RL, Information Items)

Rákosi’s fall in June, 1956, was also subject to jokes. A pun, for example, mocked the leader’s replacement with his faithful servant, the Party’s second man, the similarly widely-denounced Ernő Gerő. Yet, an Item later recalled that Hungarian workers had not at all made their peace with the fact that Rákosi had not been indicted, and could leave unharmed „for medical treatment” in the Soviet Union. According to the report, United Light Bulb factory workers at a turbulent assembly demanded the failed dictator to face trial.

In July, 1956, Rákosi left for the Soviet Union, and by the spring of 1957 it became clear that, in line with the explicit wish of János Kádár and the new Party leadership, he was to stay there. Although personally he had no influence on Hungarian politics anymore, he remained to cast a long shadow over it. RFE analysts, too, kept an eye on the Kádár regime’s changing relation to his figure and to the period he had defined. Such information, as a barometer, helped them in predicting whether Kádár’s policies were about to relax or become increasingly repressive, as well as in measuring Kádár’s grip on the Party. The analytical weekly published by RFE, titled Situation Reports, also reported on Hungarian developments concerning Rákosi and his remembrance. For example, analysts in 1967 felt that the literary monthly Kortárs [Contemporary] starting the serialized publication of a documentary novel written by Márton Horváth, a prominent cultural politician of the Rákosi period, still „deserved attention for its criticism of the attitude and policy of Rákosi.”

Naturally, Rákosi’s death in 1971 also caught their attention: separate Situation Reports summarized the available information on the circumstances of his death and his funeral. The latter claims that the funeral took place on February 23, and proudly stresses that while Radio Petőfi in Hungary reported the secret event only at 4:30 p.m., Western radios had covered it already at noon. However, a UPI news item cited unidentified sources claiming the actual date to have been February 20. They were mistaken. The Hungarian radio report truly was broadcast on February 23, yet the funeral had been carried out one week earlier, on February 16. 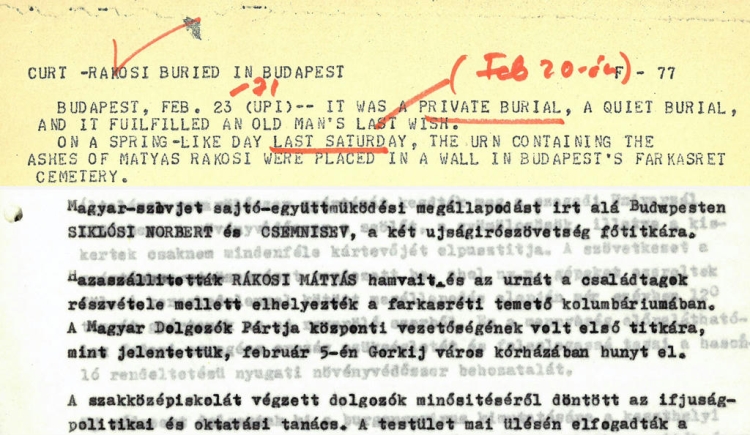 The UPI news item, issued on February 23 as well, noted furthermore that beside close family members, a small group of followers also had attended the ceremony, after which the wreath saying “We shall never forget you” left by the urn was removed in a few days. None of the above sources were aware of a Budapest gossip about the sudden “pensioning” of the state affairs and public-service employees attending the funeral uninvited.

The plaque covering the urn had no inscriptions other than Rákosi’s name and the dates of his birth and death. However, an August, 1956 Information Item recorded that the Hungarian people had authored an epitaph for Rákosi well in advance, fifteen years earlier, directly before his fall and exile:

Rákosi is dead,
Justice is here. 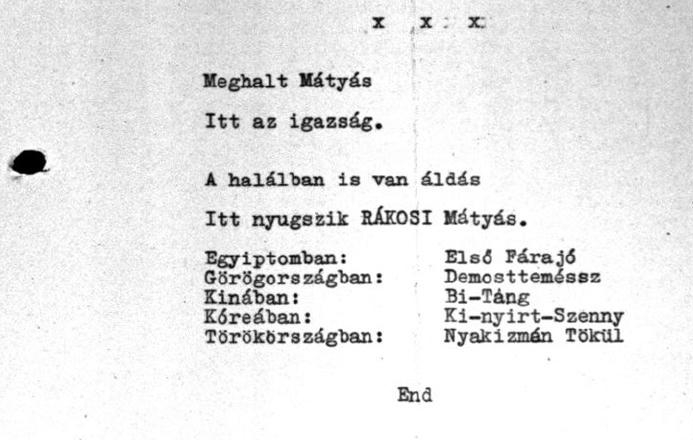