Posters Made by Atelier Populaire in 1968

The Archives received posters produced by Atelier Populaire, a workshop that supported the 1968 Paris protests with graphic works. 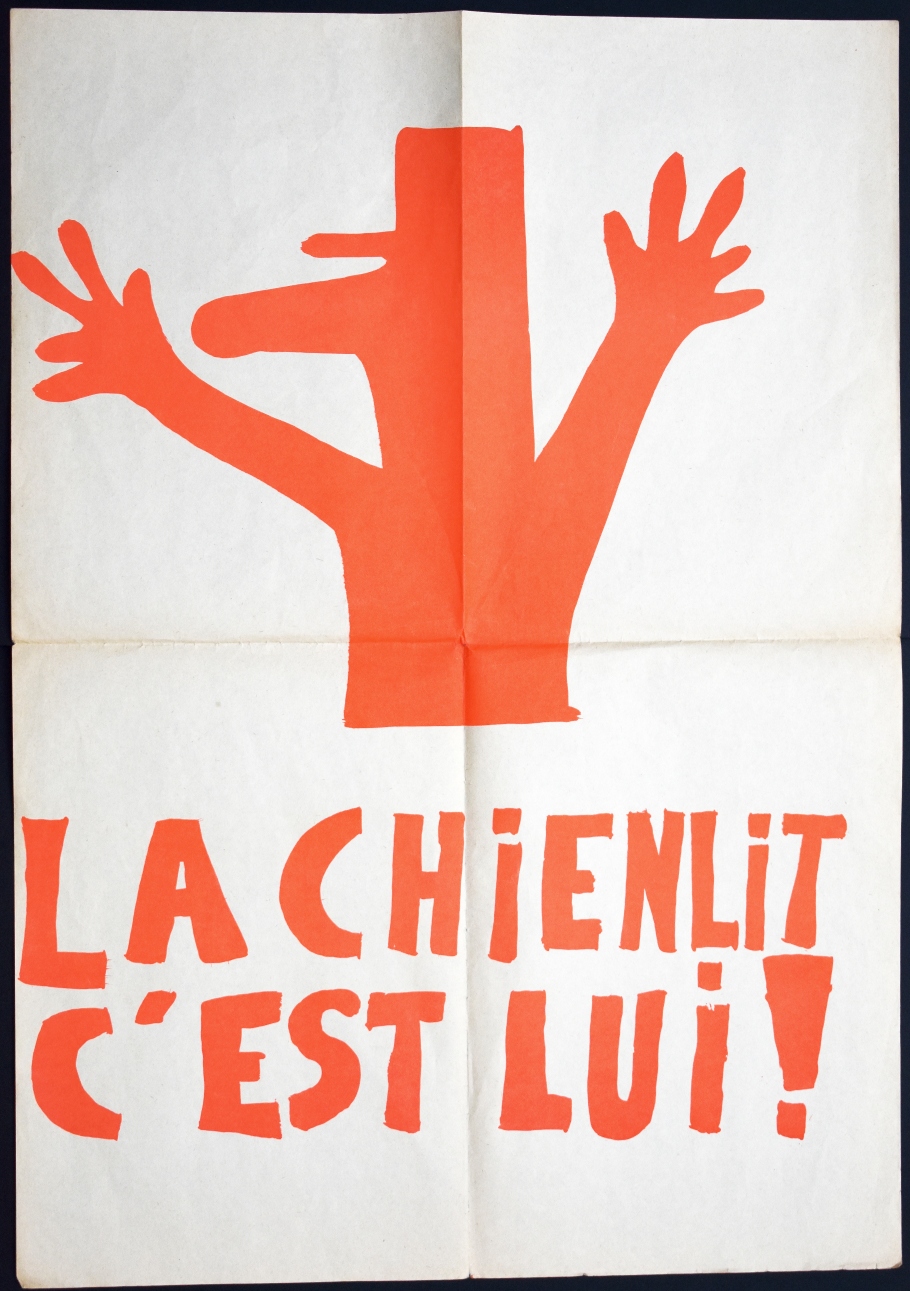 “He threw shit at the fan!”
Or literally: "He is the bed shitter." One of the best-known posters retorts Charles de Gaulle’s criticism of students.

Ever since its establishment, the events and aftermath of year 1968 have been one of the main focuses of the Archives; several of our collections, exhibitions, and public programs have addressed the Prague Spring and the students’ movements of 1968. The latest occasion was in the summer 2018, commemorating the 50th anniversary; the exhibition Farewell to the Spring presented 1968 from the perspective of the young of Central and Eastern Europe. The Night of the Museums that year was one of our funniest, as we printed the 1968 posters and slogans of French students on tote bags: "La lutte continue! On vous intoxique!" [The struggle continues! You are being poisoned!] 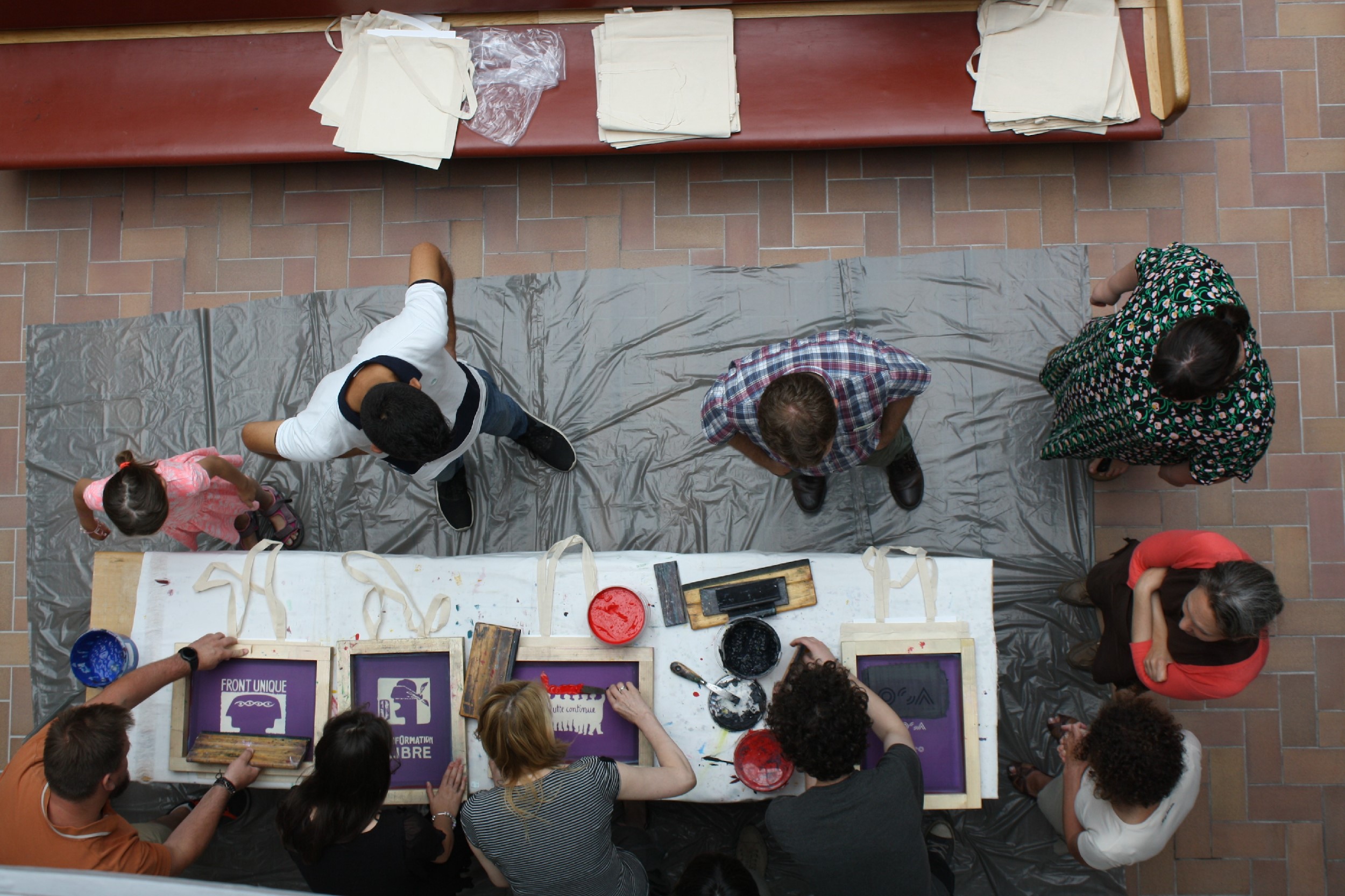 These pop-art images were designed by a group of art students calling themselves Atelier Populaire. On May 14, 1968, they occupied the lithography workshop of École Nationale Supérieure des Beaux-Arts in Paris, to print posters in support of demonstrators and strikers. They had paper from printers joining the strike, or simply used wrapping paper, and produced and distributed the posters illegally. On June 14, the police raided and closed down the workshop. Many of the original posters perished, and most of the surviving ones are in bad condition; although never intended to be artistic creations, their influence on poster design and visual art is undeniable.

In December 2019, things took a most unexpected turn; Ferenc Bojti and his wife contacted the Archives to donate a number of rare French publications, including seven of the Atelier Populaire 1968 posters. They originally belonged to the sculptor Jean-Paul Réti, who himself had taken part in producing the posters in the spring of 1968. He gave them to his friend Bojti a few years later, who brought them to Budapest.

We asked Jean-Paul Réti to share the story of the posters with us:

"This testimony is very brief and personal, I give it only on my own behalf, even though besides myself many others worked for weeks, sometimes round the clock, to produce these posters. We wanted to give visual representation to the events that had started in Paris and later spread and developed into a countrywide general strike. The posters were meant to illustrate and follow up on the occupation of universities and plants, and, of course, to send a clear message to those who haven’t got yet around to join the spreading revolutionary movement. 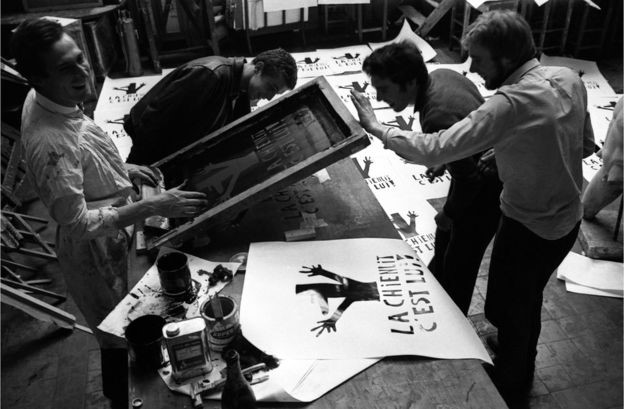 Hand-printed from silk screens on paper: the caricature of Charles de Gaulle is ready. (Magnum Photos)

(...) A number of other actions were going on at Beaux-Arts, as well as at Sorbonne; one meeting after the other, proposals on educational reform. MLF [Mouvement pour la Libération de Femme, Movement for the Liberation of Women], the first feminist movement, too, was launched at Beaux-Arts.

Getting the posters to the public was organized very efficiently; delegates from offices and factories came to us to pick up posters, and took care of distribution and pasting them up all over the city.

I am attaching the photo of my Atelier Populaire membership card. I believe no one else has one any longer. The cards were introduced in order to check people who wanted to enter the atelier, as we noticed that many people carrying cameras and claiming to be journalists looked crazily like secret police agents. 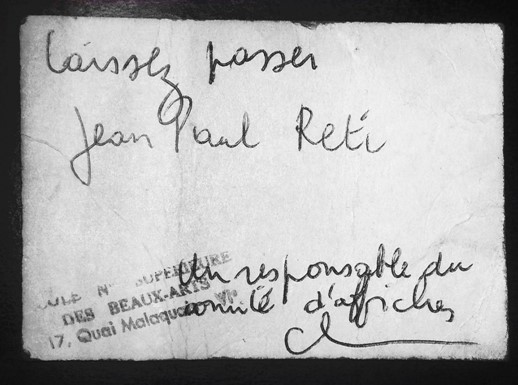 (...) The effect of these posters was so big that the political leadership decided to order the police to raid Beaux-Arts and to arrest some 150 people, including the author of this memoir. One early morning, they enclosed the institution, rounded us up, and transported us to the jail of the Préfecture in the building of the Conciergerie on the Cité island.

The prison conditions were very austere. One day, I was taken to my flat in handcuffs in the company of two plain clothes and one uniformed policemen. They were looking for political documents. All they could seize were some books, including the biography of pacifist Gandhi, and a copy of a valuable manuscript on necessary education reforms. The books and the documents were never returned to me, the police simply stole them. The palpable tension, the abuse of power were a sign that the highest echelons of the state were in great panic. One must not forget that at a certain point de Gaulle travelled to Germany to try to call back to France the French tanks that were stationed there.

Beaux-Arts was closed for a while, but soon reopened and resumed teaching. Just as all over the country, our movement had tangible achievements at the university. The professors, who previously had posed as the exclusive and unapproachable bearers of KNOWLEDGE, now, after this revolutionary spell, could not refuse the dialog; the kind of teaching method that is based on debate and exchange of opinion between professor and student, something which did not exist in the 'ancien régime.'

(...) Those posters that served (and instigated) the revolt prove that the powerful can be overthrown and forced to accept changes." 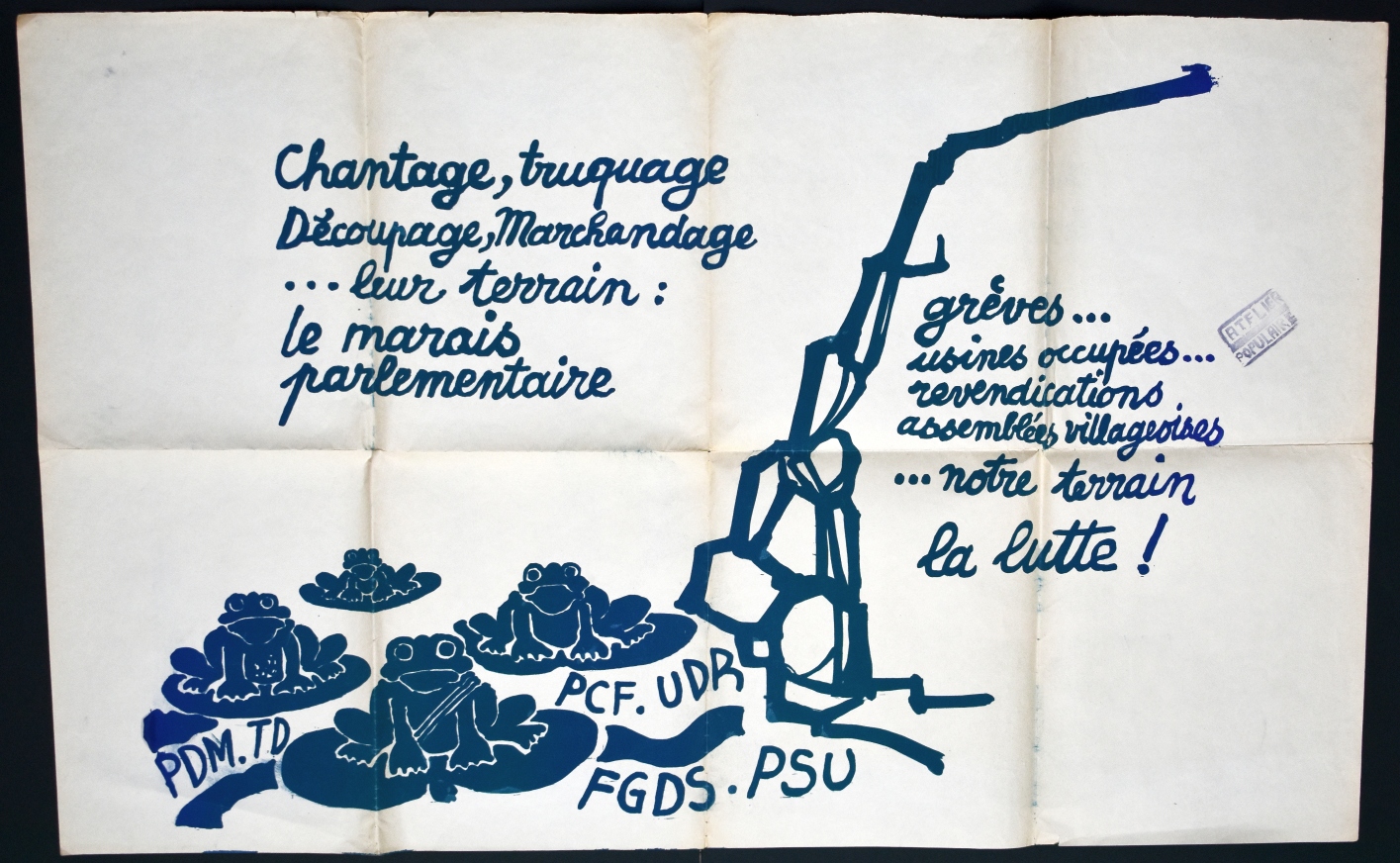 "Blackmail, chicanery, gerrymandering, bargaining…: their world is the marsh of the Parliament. Strike, occupation of factories, demands, village meetings… our world is the fight!"
The poster bears the stamp of Atelier Populaire. "Marsh" is a reference to the 1792–93 French National Convention of the French revolution. It was made up of three big groups, the Mountain of the radical populist Jacobins, the moderate liberal Girondists, and the Marsh or Toads constituting the majority. The latter voted with either the Girondists or the Mountain, depending on the issue. 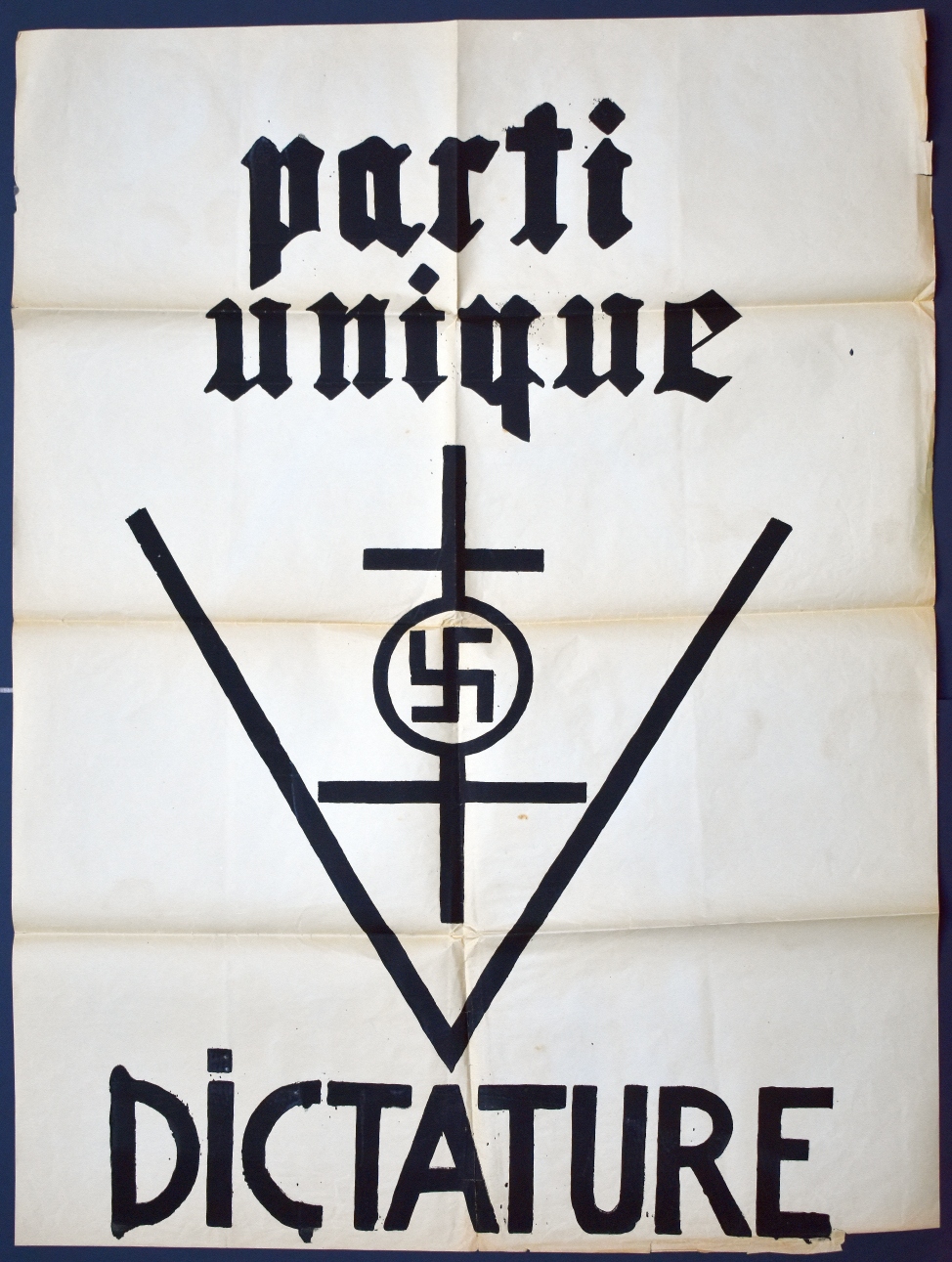 "One party – dictatorship."
The Cross of Lorraine and the V was the symbol of the Gaullist party. 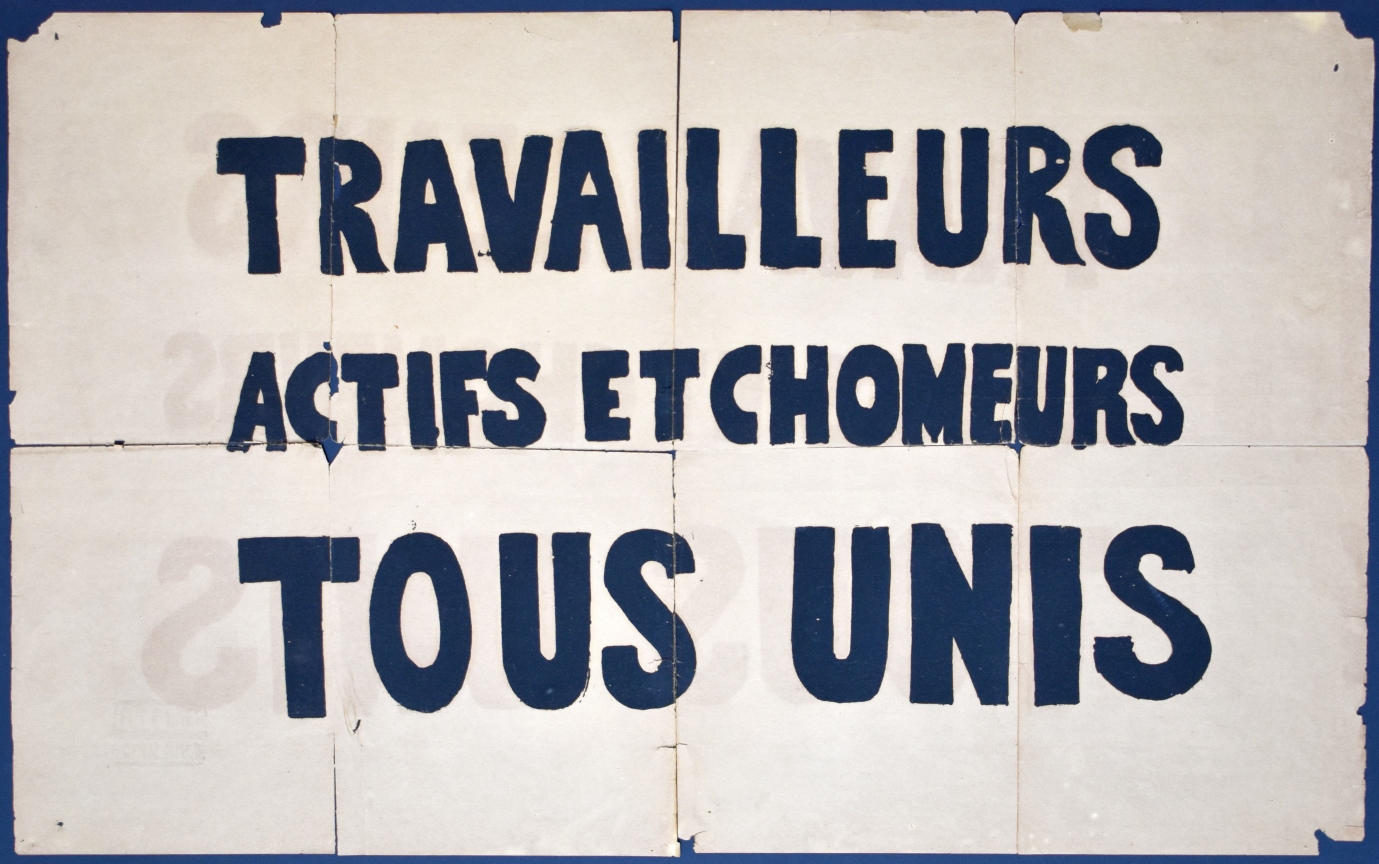 "Workers and unemployed, unite!"
This poster was recovered in eight pieces.