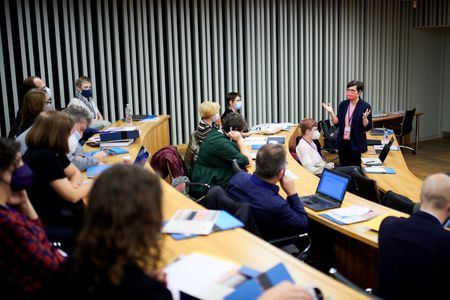 On the 10th anniversary of the Visegrad Scholarship at OSA, a three-day workshop titled Methodologies of Working in Cold War Archives was organized with the active participation of our archival staff and invited guests: academics, historians, sociologists, researchers, archivists, and digital specialists. It was a professionally charged three days for participants with intense discussions, vibrant presentations, and bright and engaging Q&As. Ioana Macrea-Toma, the organizer of this workshop, reflects on the professional event.

There were many stakes in initiating this event. The main aim was to start a discussion about the ways to engage with the problematic records of the past in a time of increased scholarly and political divisions. Is it possible to build commonsensical narratives around matters of common concern while using opposed archives and truth regimes? Can the study of both the Cold War and its sources have a heuristic value nowadays?

On the 10th anniversary of the Visegrad Scholarship at OSA, we considered it was meaningful to start this conversation with those who consistently used Blinken OSA’s sources, but also to enlarge it to a broader circle of researchers, who work with documents similar or in contrast to those that we have (belonging to international organizations trying to bridge the East/West divide, belonging to State Socialist institutions or to the secret police archives. Some scholars from the workshop recognized that they should have had such a discussion before they started writing their books. Researchers then addressed the issue of “silences” or “noise” in the archive, of third ways of addressing archival corpora without succumbing to either relativism or essentialism, of what kind of hyper-interpretation to apply to policy papers on both sides of the Iron Curtain while still making such documents relevant beyond the wooden officialese (the RFE audience surveys, for example, and the Romanian establishment of healthy food ratios), and of the very uses of sensitive documents in post-traumatic societies with complicated archival cultures and norms.

Another important stake was to ground the discussion within Blinken OSA’s archival laboratory as a place where people do not only select sources but as a place where researchers and archivists come together, again and again, reflecting on the relationship between archival curation and historical outcomes. Internal archival work could be shown to be in a more direct relationship with research work, especially in a time when archives become key players within the evolving media systems when archives and internet platforms are superposed, and decontextualized digitized items can both defamiliarize narratives (thus making archives laboratories where theories can be tested), but also flatten truth regimes. Last but not least, what was hopefully reasserted was the role of Blinken OSA as an intellectual hub in re-conceptualizing problems and lingering questions among scholars of (post)Socialism and the Cold War.

The discussion with keynote speaker Stephen Kotkin brought about the idea of the malleability of archives (that could be used for ideologically divergent narratives), but also that of the importance of a serious evidentiary and yet “political” grounding of historical work, which should not hollow out the problems of Communism. Kotkin delivered a powerful, passionate speech in his conversation with Blinken OSA Director István Rév, and expressed his joy of contributing to this timely discussion.