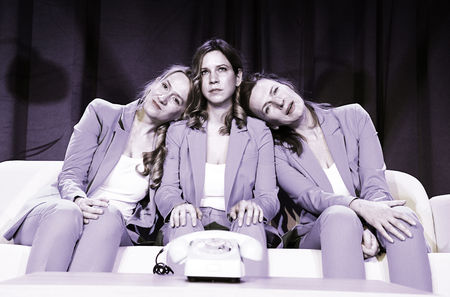 We invite the public to a free theatre performance on  December 31 at 7 pm at the Blinken OSA Archivum. The stage adaptation of Sándor Petőfi's The Apostle will be performed by the 6szín Teátrum, and is open to the public on Saturday, December 31, after registration.

To mark the 200th anniversary of the poet's birth, the Archives will launch a series of Petőfi-related events in 2023. Starting on March 15, the programs will explore various political, literary, theatrical, and cinematic aspects of Petőfi's reception. In the run-up to the season, we welcome the public to a performance of Apostol, directed by Bálint Szilágyi, performed by Natasa Stork, Zsófia Szamosi, and Ágota Szilágyi in the archives’ building on Arany János Street.

"I would call it the beginning of a family novel. Who may our hero be? He wants to belong because he feels underprivileged. He meets world history. The war of independence gives meaning to his life. For a while. One-sided dialogues with God, a disturbing lack of celestial welcome back. He is an apostle of that sort. Love comes and with it the bleak calm of happiness. But the story does not end there. People need to make a living. And life exists only within a society. But freedom is only outside of it. So in the end: should we care about the world? Or should we all just cook our own steaks? Sylvester is busy, but the world would continue to suffer in silence. It does not call for a revolution. Then Sylvester loses everyone around him. The freedom fighter becomes a terrorist. No comment, I would say. Just traps and tin bullets. The lone warrior always fails."

"These three actresses belong in the top category of the Hungarian theatrical world today, even though they all work in independent productions, obviously under more difficult circumstances than if they were members of a company."
An Audience Member

"Bálint Szilágyi directed Sándor Petőfi's narrative poem The Apostle with a completely unconventional, yet perfectly authentic pulse on the 6szín stage so that this almost 200-year-old text in its free verse manner can speak and have an amazingly contemporary impact - really gives you goose-bumps, a unique experience."
Gábor Csatádi, Pótszékfoglaló

SZILÁGYI BÁLINT
Born in Budapest, graduated from the University of Theatre and Film Arts in 2017.

NATASA STORK
From 2004 she studied at the University of Theatre and Film Arts in the class of Gábor Zsámbéki and Sándor Zsótér. Between 2008 and 2010 she was a member of the National Theatre. Since 2010 she participated as a freelancer in various independent theatre productions at home and abroad as well.

In Budapest, Natasa performs at the Proton Theatre’s  Papa Dollar's Children and the plays of the  Secret Company, among others. Her first leading role in a film was in Lili Horvát’s Oscar-nominated film Preparing for an Indefinite Time Together. She was awarded the Best Actress prize at the Porto, Antalya, Valladolid, and Les Arc film festivals for her performance and was selected as one of the ten most promising actors in European cinema in the Berlinale Shooting Stars Program in 2021.

ZSÓFIA SZAMOSI
After graduating from the University of Theatre and Film Arts in 2001, Zsófia was a member of Vígszínház for four years. She then joined Béla Pintér and Company, which has enjoyed many national and international successes, and in 2016 she chose to freelance. In 2011, she won the Best Actress Award of the Season at the PoszT for her title role in Szutyok. In 2012, she received the Jászai Mari Award. In 2017,  the short feature film she starred in titled Everybody won an Oscar. In 2017 and again in 2019, she won the Best Actress award at the Hungarian Film Week, and has also won the Hungarian Film Critics' Award several times. She won the Best Monodrama Award for her performance titled Pali at MOSTfest in 2020.

ÁGOTA SZILÁGYI
She was born in Szatmárnémeti. After graduating from the University of Drama in Timisoara, she joined the Hungarian State Theatre Csiky Gergely in Timisoara and then the Theatre in Novi Sad. In 2012 Ágota won the Best Performance Award at the Festival of Transnational Theatres in Kisvárda. Currently, she is a freelancer. Her most important roles include Ranyeszvkaja (Chekhov Cherry Orchard), Margarita (Bulgakov – Master and Margarita), Lady Anna (Shakespeare –Richard the Third), Csongor/Tünde (Vörösmarty – Csongor és Tünde). The latter performance won her the Lajos Őze Award.


The performance is free of charge but registration is required.
Seating is on a first-come, first-served basis due to limited seating.
Registration: https://forms.office.com/e/bpAxuaLMud