In Memory of László Najmányi – A Punk Is Dead 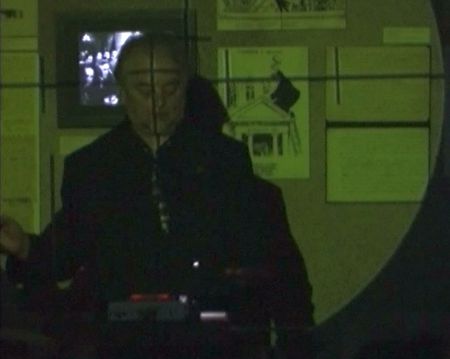 Writer, stage designer, artist, performer, and film director, who was an outstanding avant-garde artist of the 1970s, and the founder of the first punk band in Hungary. In the late 1970s, Najmányi had to leave the country to escape harassment by the authorities. He worked in France, Canada, and New York, and eventually returned to Hungary in 1996.

The exhibition titled Generation Z – Russian Pioneers of Sound Art and Musical Technology in 1910–1930 opened at the Galeria Centralis of the Archives on June 9, 2011. The exhibition was curated by senior lecturer and researcher at the Center for Electroacoustic Music at Moscow State Conservatory and Head of the Theremin Center Andrey Smirnov.

Two weeks later, on the Night of the Museums, László Najmányi gave a full-house theremin concert in Galeria Centralis. More than 300 people gathered in the Goldberger House on a muggy summer night to listen to the electronic oratory composed by Najmányi about the life of the inventor Leon Theremin. The event, closely connected to the Generation Z exhibition, was special in its content and style. The music was accompanied by a background screening of rare documentary film excerpts. In the gallery, turned into a concert hall for the night, visitors could see a genuine Leon Theremin-built instrument, along with other carefully selected inventions of the master.

As one of the few theremin artists, László Najmányi passionately studied the history of the instrument and the life of its creator. He premiered his oratory entitled Theremin with the participation of the Fleurs du Mal company at the Hungarian Academy of Music in 2000. Earlier, Gábor Zsigmond Pap and Najmányi directed a radio play with a similar title. Najmányi published a documentary novel on Leon Theremin’s extraordinary life full of ethereal electronic music, spying, forbidden love, and Gulag. The book was the latest in a series presenting the Theremin story via various genres: oratory, radio play, dance theatre, video.

Najmányi shared the main idea of the exhibition, namely that the theremin is one of the few amazing innovations that came from Soviet Russia in the early 20th Century, along with variophone, rhythmicon, emiriton, ekvodin, and graphical sound. Yet, while the name of Leon Theremin, the inventor of the first electronic musical instrument, has always been widely known, the rest of the creators and their creations were forgotten. Their instruments were reinvented in other countries decades later, and used without knowing their origin. The exhibition was an attempt to shed light on the history of this musical era by reconstructing and trying to understand it.

It was a special moment of grace for the Archives to have been able to invite László Najmányi to give a concert in Galeria Centralis and play the theremin.

A video recording of László Najmányi's Galeria Centralis performance is available at the Archives.