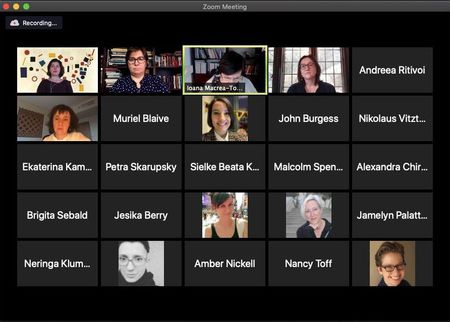 The convention hosted over 500 roundtables and panels, a film series, receptions, entertainment breaks, and affiliate group business meetings. With over 2,500 session participants and attendees, the 2020 Virtual Convention was a dynamic and productive event.

Yulia Karpova, Assistant Archivist at Blinken OSA, planned to present her new research findings on furniture design for the Research Institute for Obstetrics and Gynaecology in Leningrad in 1938. However, she writes, “because my research trip to St. Petersburg in the spring was canceled, I could not carry out a case study. Instead, I presented a new research project entitled ‘The Aesthetics of Biopolitics: Design for Reproductive Healthcare in Denmark and Russia, 1920s–90s’.”

Karpova continues, “Situated on the intersection of the feminist history of art and design, science and technology studies, new materialism and material feminisms, this research will explore how gender policies of state socialism and Nordic social democracy were expressed in visual-material environments comprising buildings, furnishings, medical tools, and screening instruments, posters, and flyers propagating normative sexuality and maternity. I discussed three preliminary examples—design obstetrician forceps designed in Copenhagen in 1857 that became an object of long-lasting influence into the 20th century and ultimately an icon of Danish design; the Research Institute of Maternity and Infancy in Sverdlovsk, built in 1936 as part of the constructivist Medical Neighborhood; and, finally, the design of furniture for birth assistance, commissioned in 1938 by the Research Institute of Obstetrics and Gynecology in Leningrad from the avant-garde artist and architect Boris Smirnov (which remains to be further explored through archival research).“

Her paper investigated the complexities of writing truthful narratives in post-Socialism by resorting to interlinked and yet opposed archives; those of the former secret police and those of US-backed agencies providing alternative information. “Local scholars versed in post-structuralism, the archival turn, and discursive theories, might opt for downplaying issues regarding the moral superiority of Radio Free Europe’s archives over the Communist ones, and argue for a perspectival approach, merely counterpoising propaganda to counterpropaganda. Other scholars, having expertise in global Cold War issues, might endorse such an approach, based on their knowledge of the US’s very problematic military and informational support for dictatorships and counterterrorism. How can historiographic narratives in Eastern Europe (and beyond) recapture an ethical standpoint without succumbing either to relativism or moralistic anti-Communism? I investigated this conundrum by addressing certain routinized approaches to archives, which, despite their reflexivity about the sources concerned, obscure rather than highlight phenomena from the past.”