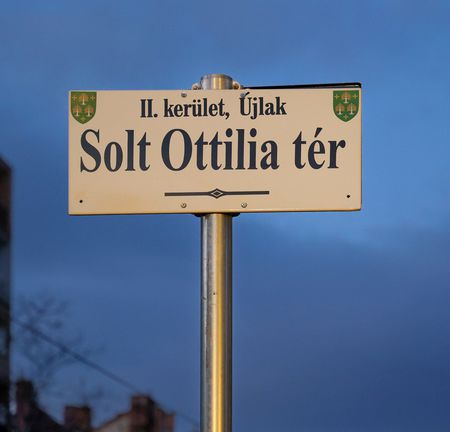 „Ottilia died without ever having received any concrete acknowledgment. No one ever thought to award her with a star, a cross, or certification of merit after her retirement or after her car accident (true, she might not have accepted it anyway). But no one ever thought about at least offering to publish her remarkable articles.”
(Ferenc Kőszeg)

The momentum has arrived for the often ungrateful posterity to express its acknowledgment and gratitude with a fitting gesture. On the 25th anniversary of Ottilia Solt’s death (1944–1997) a square was named after her in District 2 of Budapest, not far from her former apartment on Komjádi Béla Street, as a result of a community decision-making process. The street name sign was unveiled on February 1, 2022, at a formerly unnamed public square, situated at the corner of Frankel Leó Street and Harcsa Street.

Ottilia Solt was a member of the democratic opposition, a colleague of the sociologist István Kemény, the founder of the Foundation for Supporting the Poor, and editor of the samizdat publication Beszélő, as well as the founding member of the party Alliance of Free Democrats. She was a member of the Parliament after the regime change, and later a head-teacher of the John Wesley Theological College.

The Black Box Foundation depicted her life in the 1997 portrait film Ottilia, using archival footage, interviewing her contemporaries, and quoting secret police reports. The documentary film is now available (only in Hungarian) on our YouTube Channel.

Courtesy of Blinken OSA, Ottilia Solt’s speech given at the democratic opposition commemoration on October 6, 1988, recorded by the Black Box Foundation, was also played.