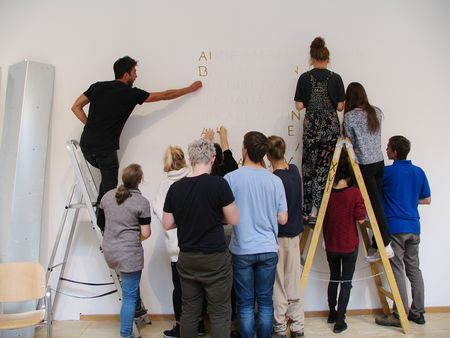 Gaudiopolis or the City of Joy was a children’s republic founded by Lutheran pastor Gábor Sztehlo in Budapest after WWII. Gaudiopolis was the home of hundreds of severely traumatized orphans and children left without homes. The City of Joy not only gave them shelter but also the opportunity „to remove social barriers and become autonomous, self-confident adults, who strive for self-awareness and are capable of self-criticism, are skilled and educated”. Between 1945 and 1949, the period of high hopes and grave disillusionment, the creation of a new, free and democratic world seemed possible. This exhibition presents the history of Gaudiopolis and other similar projects launched by enthusiastic, courageous and persevering individuals and groups who believed in a better and more just society, who wanted to renew the political and cultural life in the country, to reform education and to build a new country – somewhere in Europe.


2. OUR CITY – DRAMA PEDAGOGY WORKSHOP
Gaudiopolis was run as a representative democracy, with its own president and prime minister, constitution and laws. The children organized cultural programs themselves, founded a library, and were allowed to freely choose their vocational training or work as volunteers. They had their own currency, the so called Gapo Dollar, the exchange rate was pegged to the price of a tram ticket. Gaudiopolis was a thinking, critical and self-sustaining community which proved to be an especially progressive and balanced social organization in the chaotic conditions during and after the war.

In the workshop students will play the roles of the members of a children’s republic who have to solve conflicts in two different ways: as a democratic and as a dictatorial community. The only fixed elements in the play are character cards, and the way the situation develops will entirely depend on the participants. During the session, students will learn about the historical background of Gaudiopolis, together they will discuss what democracy and dictatorship is, experiencing what it is like to be citizens, ministers, journalists or judges involved in making decisions for the entire community.

Venue: Blinken OSA, 1051 Budapest, Arany János utca 32.
Because the number of participants is limited, early registration is recommended. When applying please give the full name of your school, the number of students participating, the date and time chosen, and the telephone number of the contact teacher.