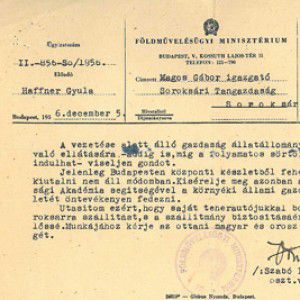 The personal papers of Gábor Magos (1914-2000), an agricultural engineer and politician, and a prominent member of the intellectual circle around Prime Minister Imre Nagy during the Hungarian revolt was donated to OSA.

His papers include original documents relating to the revolution and his life in emigration, articles and unpublished manuscripts, interviews, correspondence with the UN and fellow émigrés, and rare Hungarian publications printed in exile.

The documents were preserved, arranged and donated to OSA by his widow, Judit Gimes-Magos, who is the sister of Miklós Gimes, a journalist and politician executed together with Imre Nagy in 1958.