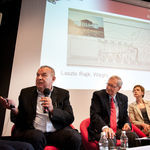 In preparation for the forthcoming 25th anniversary of 1989, OSA is proud to have taken part, together with Hungary's official Ambassador to the project, László Rajk, at the launch of Europeana 1989 at the History Meeting House in Warsaw.

Europeana 1989 is a topical crowdsourcing project launched by Europeana, Europe’s digital library, archive and museum, to preserve and publicize personal memories from the time of the fall of the Iron Curtain. The project aims to create a vivid and personal picture of the revolutionary events in Europe by inviting members of the public to contribute their photographs, sound and video recordings, leaflets, letters and other memorabilia at a series of collection days in each of the countries taking part, as well as via the project website.

The highlight of the Warsaw project launch was a public roundtable discussion with project-ambassadors from the Czech Republic, Estonia, Germany, Hungary, Latvia, Lithuania and Poland, who talked about the importance of preserving the memory of these European events of public civic actions for democracy and freedom, and who also shared their own personal stories and memories. The launch also marked the anniversary of the first free elections in Poland, held on 4 June 1989.

Over the next eighteen months, further events and collection days will be held to commemorate the Baltic Way human chain demonstrations of August 1989 in Estonia, Latvia and Lithuania, the Czech Velvet Revolution, the start of the peaceful revolution in Germany and, in Hungary, the cutting of the Iron Curtain at the border with Austria. As the Hungarian project partner, OSA will organize these events in 2014 in Budapest and other locations.