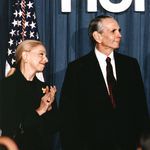 This unique and engaging collection, donated by former U.S. Ambassador to Hungary Donald Blinken and his wife Vera, spans 1989-2005 and will provide researchers with the opportunity to understand post-communist Hungary through various lenses. It is comprised of various materials, including correspondence, newspaper clippings and photographs. We see evidence of the Blinken’s political work through materials highlighting the North Atlantic Treaty Organization (NATO) and its enlargement, Hungary’s post-Cold War economic growth and the country’s opening. We also have the opportunity to bear witness to glimmers of the ambassador and Vera Blinken’s personal lives in Hungary and in New York. Donald Blinken, a Harvard graduate and native New Yorker, developed an interest in and love for Hungary through his wife, Vera Blinken, a Hungarian refugee who escaped Central Europe after World War II.

Both Vera and Donald Blinken are deeply connected to Hungary. Mrs. Blinken left Hungary as a child and chronicles her escape and subsequent return in the couple's 2009 book Vera and the Ambassador: Escape and Return. Ambassador Blinken served as U.S. ambassador to Hungary from 1994-1998. He was instrumental in these critical post-Soviet years in assisting the privatization of the Hungarian economy, guiding Hungary’s successful participation in the Bosnian peacekeeping process, helping restore Hungarian civil society, and supporting Hungary’s membership in NATO and the EU. Upon returning to Hungary with her husband, Vera founded Primavera, the first mobile breast cancer screening program in Central and Eastern Europe. In 2002, for her service to her native country, Vera was awarded the Middle Cross of the Republic of Hungary. Vera is actively engaged in the work of the International Rescue Committee as an overseer and has served the organization for more than 30 years.

In 2006, the Blinkens made a contribution to establish the Blinken Collection of interviews with Hungarian refugees after 1956. The materials were digitized on the 50th anniversary of the 1956 Hungarian Revolution and published online as part of OSA digital holdings. The collection contains 358 digitized items including English-language transcripts of interviews with Hungarian adult and child refugees and related documentation, created by the Columbia University Research Project on Hungary (CURPH) in 1957 and 1958. The CURPH project focused on the social, economic and political trends in post-war Hungary, up to and including the 1956 Revolution. According to the project documentation available in the Bakhmeteff Archives of the Rare Book and Manuscript Library of the Columbia University and the Manuscript Archives, in total over 600 interviews were to be carried out by specially trained, Hungarian field-workers in European and US refugee camps, as well as public opinion researchers at leading American universities. While the physical collection is still with the Columbia University, OSA holds the digital copies, thanks to the generous support of the Blinkens.