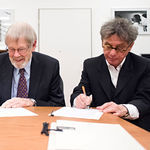 The legendary radio stations Radio Free Europe, and its Russian sister station, Radio Liberty, not only broadcasted programs but also developed into the largest information-gathering institution of the Communist and Cold War era. In order to counterbalance Soviet propaganda, a number of sources served as raw material for the analysis of the political, social and cultural life during this time, including public and confidential information from Soviet Bloc countries and Western allies, media monitoring conducted day and night, interviews from tourists and dissidents, illegal “samizdat” publications, and vast library and journal collections. This unique and irreplaceable information set was accumulated at the Research Institute in Munich by the Czechoslovakian, Polish, Hungarian and other national units with the support of the US government.

After the change in Soviet Bloc political-system, this documentary asset was divided into three parts. Personnel files of those working at the Radios remained with the successor organization in Prague; the corporate documents had been transferred to the Hoover Institution at Stanford University in California; while the entire holdings of the RFE/RL Research Institute has been in the custody of the Vera and Donald Blinken Open Society Archive (OSA) in Budapest since 1995--which OSA made freely accessible to the public.

The relationship of the three organizations entered a new era in November 2015, when RFE/RL and OSA signed a joint memorandum. According to the document signed in the presence of Donald Blinken (former US Ambassador in Budapest) and his wife, as well as John Shattuck (Rector of the Central European University), both RFE/RL and the Hoover Institution will transfer copies of their historical documents to OSA in order to digitize, process and – observing the privacy rights of those concerned – make them available for research. Digital technology will to unify the divided documentary heritage of the Radios.

OSA’s role in all of this would not be possible without its twenty-years of professional activity which not only instilled the confidence of partner organizations but also that of its users, which have turned OSA into one of the biggest international archives of Communism and Cold War information.

In the future those who are interested not only in historical documents but also in their creators and the way their institutions operated, do not need to travel to California or Prague. It will be sufficient to watch OSA Digital Repository web site where records will appear in the order of processing, the most recent published collection contains 8,100 encrypted telex messages of the Free Europe Committee, or to visit the Archives’ Research Room.

The full description of the Radios’ documents totaling about 2,500 linear meters, created in English and national languages of the region, can be found online.