Initiative for Dialog About the Royal Palace 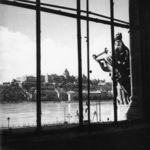 The following topics will be discussed:

- What kind of reconstruction, conversion and architectural additions are desirable from the archeological and architectural points of view, as well as those concerning historical protection and urban development?

- What are the primarily cultural functions that would ensure the active communal use of the Royal Palace and the Castle?

- What kind of conversions are necessary to create the best conditions for the operation of institutions that are already there, and those that might move into the area?

- What are the monument-preservation, architectural and historical considerations that justify that the authentic state of the Palace: is how it was created by Hauszman in 1905? Should it be reconstructed in the same way?

- Should we be wary–and if yes, why–of trends in contemporary architecture in rethinking the Palace and the Castle Quarter?

Organizers of the Initiative for the Dialogue about the Palace: