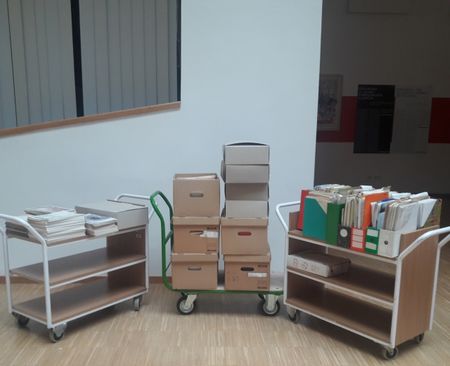 In November, 2020, Blinken OSA received the personal papers of Ádám Modor (1958–2009), publisher, the head of Katalizátor Office, further enriching the Archives’ collections presenting the activity of the Hungarian democratic opposition.

Ádám Modor worked primarily as samizdat editor and distributor, briefly contributed to Beszélő as a printer, and assisted the Áramlat Publisher as an editor. Next, he worked at the Rákosrendező railway station as a lamp operator, this was the time when the Katalizátor Office began its activity, promoting literature banned in Hungary. They published Bulgakov’s novella Heart of a Dog in 1987 (despite it was not banned in the Soviet Union anymore, its publication in Hungary still faced obstacles) or Zoltán Zsille’s work titled A létező kecske (The existing goat).

A 1989 BBC interview with Ádám Modor, in Hungarian:

(From the virtual collection Will There Be a 1989?)

His first legally published book, Halottaink, 1956 (Our dead, 1956) was issued on the occasion of the reburial of Imre Nagy, and included the names and biographies of people executed following the 1956 Revolution. After 1989, the Katalizátor Office made several attempts to continue publishing, but due to distribution problems, it had to close down in 1995. After this period, Ádám Modor worked as a journalist and a historian. His attempt to explore the history of the democratic opposition and the samizdat resulted in various publications; among them, his monograph on the early years of the Fidesz party, titled Ellenségből ellenzék (From opponent to opposition), a book he edited on Tibor Pákh, and one he wrote on György Krassó. From 1997, he worked as a documentary filmmaker with János Gulyás, their films depict the underground groups of the Kádár era; e.g. the documentaries Szamizdatos évek (The samizdat years) or Katalizátorok (Catalysts).

The collection that Blinken OSA received includes sources covering most of Ádám Modor’s public activities from his samizdat years to the film interviews with democratic opposition activists. The processing of the written, analog audio and video, and mixed digital materials will begin shortly, and the collection will be available for researchers soon.