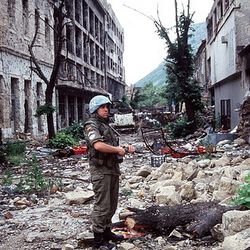 A broad range of video materials (1990-1995) offering highly diverse, often conflicting coverage and analyses of the wars in the former Yugoslavia, focusing primarily on war crimes and ethnic cleansing, international law and (non-)intervention, refugee issues, testimonies from victims and perpetrators, and the use of rape as a weapon of war. Incorporating former Yugoslav and international media broadcasts, propaganda films based around massacres, interviews, and court proceedings, the series documents numerous atrocities committed in the name of nationalism, but also contains programs on parts of the former Yugoslavia that had not (yet) experienced armed conflict: Kosovo, Macedonia, Slovenia, and Vojvodina. There is also a small number of videos produced by anti-war groups, including a satirical Very Rough Guide to Sarajevo. The vast majority of programs are accompanied by transcripts.

The series consists of copies of materials gathered by the United Nations Commission of Experts established in October 1992 to collect, examine and analyze evidence of grave breaches of the Geneva Conventions and other violations of international humanitarian law committed on the territory of former Yugoslavia between 1992-1994. The materials were donated to OSA by M. Cherif Bassiouni, Chairman of the UN Commission of Experts and President of the International Human Rights Law Institute (IHRLI) at DePaul University, Chicago, Illinois.

Part of the Records of the International Human Rights Law Institute Relating to the Conflict in the Former Yugoslavia (IHRLI) collection.