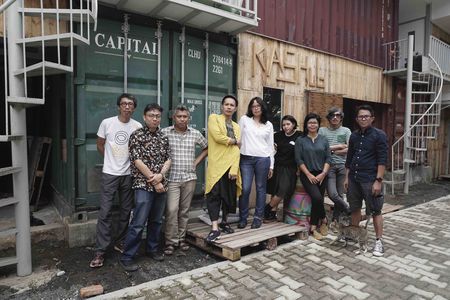 Dot.To.Dot is a newly established curatorial visitor program aiming to boost the links between the members of the Hungarian and international art scenes. We plan to invite 4-5 international curators and critics yearly with stimulating professional backgrounds for a short research trip to Budapest/Hungary. Based on preliminary dialog the tailor-made program of our guests includes meetings with Hungarian art and cultural players sharing common interests and research topics. Additionally, we also organize public events in order to offer a platform for discussion for a wider audience.

Farid Rakun is a member of the Indonesian artists’ collective ruangrupa, who will be the curators of the next edition of documenta in 2022, one of the most prestigious art events taking place in Kassel, Germany. In his lecture, Rakun will review the circumstances which led to the inception of ruangrupa in Jakarta shortly after the fall of the Suharto dictatorship. Further on he will talk about the Indonesian perception and practice of such values as community, solidarity and togetherness, some of ruangrupa’s core research topics. Related to this Rakun will also focus on the question of how all of this can be addressed and presented in the framework of such a high-profile, international art event, as documenta.

Trained as an architect (B. Arch from Universitas Indonesia and M.Arch from Cranbrook Academy of Art) Farid Rakun wears different hats, depending on who is asking. He’s an artist, writer, editor, teacher and instigator based in Jakarta. He is also a part of the artists’ collective ruangrupa, with whom he co-curated TRANSaction: Sonsbeek 2016 in Arnhem, NL, and currently functions as the collective’s Artistic Director for documenta 15 (Kassel, 2022).

The art collective ruangrupa (the name translates loosely as ‘a space for art’) was founded by a group of art students in 2000, two years after the fall of Suharto’s dictatorship. The period known as ‘reformasi’, similar to the years following the collapse of communist regimes in Central and Eastern Europe, ushered in a golden age of grassroots, alternative cultural and civil initiatives. ruangrupa was conceived as a hub for critical thinking and collaborative art practice in Jakarta, where by providing different art events, festivals and services they have solidified into one of the leading non-profit art organizations. In the meanwhile, ruangrupa has transformed into an interdisciplinary group that includes among other architects, social and political scientists whose agenda is focused on contemporary urban issues and the notion of collectivity. The group runs various art projects and services, such as a radio channel, a library, a publishing house, and a public learning space.