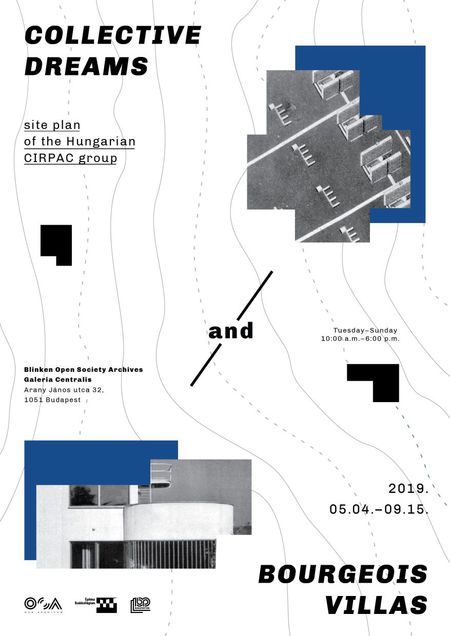 Joint opening of the exhibition and the 2019 edition of Budapest100 entitled In the Footsteps of Bauhaus:

In interwar Hungary, the CIRPAC group was one of the most important representatives of the “Neues Bauen” [New building] movement. Farkas Molnár, József Fischer, and their associates, who were linked to Bauhaus and its mentality in several ways, ventured beyond the framework of architecture. Addressing social issues, they wrote publications and organized presentations and exhibitions—even if it meant confrontations with the authorities. Thus, besides architectural achievements, their site plan also presents the complex political conditions of the 1930s.

National CIRPAC groups were established in 1928 during the first meeting of the International Congresses of Modern Architecture (CIAM). CIRPAC groups were responsible for communicating the architectural and urbanistic principles laid out at CIAM congresses to professionals, the public, as well as to clients and decision makers. As such, the activity of the Hungarian CIRPAC group also focused on the housing crisis of the 1920s and 1930s, a result of the combined impact of the world war, the Treaty of Trianon, and the Great Depression. Besides design contracts, they advertised the achievements of the CIAM congresses and of new architecture in general in publications, presentations, and exhibitions. The collective, primarily defined by Farkas Molnár and József Fischer, ventured beyond the framework of conventional architecture. The members of the group considered themselves as agents of a broader social phenomenon, rather than merely of the architectural scene. Their site plan thus depicts not only the professional influences coming from abroad, whether to be followed or to be resisted, but also the domestic and international sociopolitical terrain. This site plan presents the designs and existing buildings—collective dreams and bourgeois villas—as civic rather than architectural establishments, next to the tactics and tools of the fight for publicity, as well as the transitory alliances with contemporary (artistic, intellectual, political) circles.

By presenting the history of the Hungarian CIRPAC group, the exhibition joins the discourse of recent years, looking for relevant patterns in 20th-century history which we can learn from today. Comparable to international tendencies, the group's activity is especially notable because as architects they took a stand on social issues beyond architecture. This even lead to confrontations with the authorities; the walls they ran into and the different routes they were forced to take outline the complex political conditions of the 1930s.

The 2019 edition of Budapest100 entitled In the Footsteps of Bauhaus is a partner event of this exhibition.