Surrender to the Library: 10 Short Films on Library Design 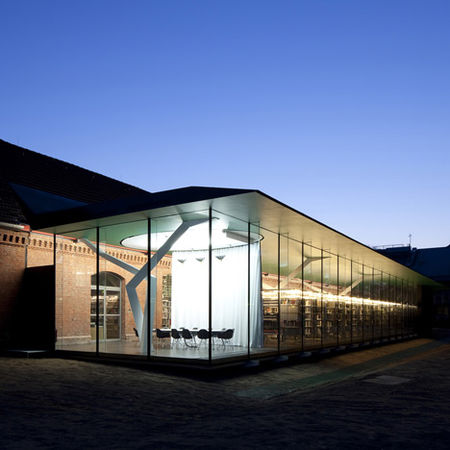 Join us for a unique film screening in connection with the Bibliotheca exhibition at OSA Archivum, exploring the idea of libraries as special, almost spiritual places, through a series of short films about library design. The films will take you on a journey through different library spaces and their transformations, the past and future of the book, and the dissolution of knowledge into information.

Libraries are paradoxical: they free the imagination while confining books and people.

An artistic short film exploring the magic space of the largest high school library in the world.

The Library of the School of Architecture and Design in Münster, Germany was transformed into a library from a former military barracks, a perfect example of transparency and intimacy in architecture.

The library in a nutshell: this writing studio on Long Island contains all the prerequisites for immersive reading and professional writing. Could private libraries be an inspiration for public ones?

An exploration of the world of print and its future in a Toronto community, obsessed with books and the relationships books can build. What are the prospects for the printed word?

Explore the grandiose and semi-transparent building designed by Eun Young Yi (South Korea), by following library users for one day. How does transparency of space influence reading?

The short video shot entirely at eye level makes us feel as if the architectural space has lost its "gravity." Does the fluidity of the spaces inspire learning or social interaction? And where are the books?

One of the first wonders visitors experience at the James B. Hunt Jr. Library is the Automated Book Delivery System, with its four robots speeding up and down 15 meters to automatically fetch and deliver items requested through its Virtual Browse interface. Is technology affecting knowledge production through the replacement of physical browsing with digital searches and the transformation of books into deliverable goods? What are the incentives provided by the freed space?

The library is miraculous: it is the only place where people and angels meet and focus on books as a source of life, and where the whispered spirit of knowledge is heard all around. Are you ready to listen?

On a mission to create universal access to all knowledge, the Internet Archive staff have built the world's largest online library. The film takes us on a tour of the Internet Archive’s headquarters in San Francisco, the book scanning center, and the book storage facilities in Richmond, California.

The event is part of an exhibition-laboratory at OSA’s Galeria Centralis, which investigates the scholarly library and its future, both intellectually and sensually, as a classical and cyber space.

The films were selected for the screening by the exhibition’s curator.