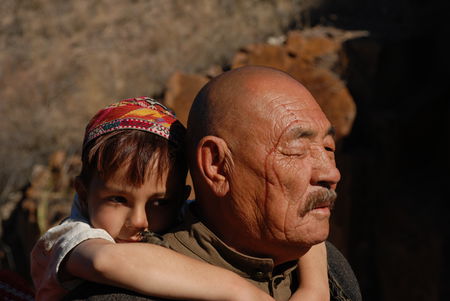 The program will present some of the most important and popular releases made in Kazakhstan and Kyrgyzstan in the last five years. Since Kyrgyzstan has boosted its creative potential of its young generation by providing special funding for short films, two award-winning shorts precede the Kyrgyz feature films.

At a village school, the children have to write a letter to Santa. One girl has a particularly urgent wish. While the letter is on its way, a lot of things happen in the village.

The seven-year-old Aidai lives with her mother Aizhan and her grandparents on Lake Issyk-Kul. Aidai draws her own fairy-tale world, where she is Princess Nazyk, the daughter of Khan Yaglakar. In reality, her mother keeps secret the father’s identity, until one day a travelling artist comes to sojourn by the lake for the summer: he is not here for the first time.

Set in a pre-modern mountain setting, this film is without dialogue. A girl is married off by her father to the wealthiest young man in the vicinity, Baktashy. However, she is in love with Mergen. Before she is taken by Baktashy to his family yurt, Mergen cuts a mark on her arm: a blood oath that he will remain her true love. Kelin made the first shortlist for the 82nd Academy Awards.

A woman, accompanied by her son, visits an old friend with a daughter who has reached marriage age. The woman departs, leaving the son to help her friend with the household. The young man and the girl are embarrassed at first and do not converse. However, an inquisitive and timid dialogue of gazes develops between them. Best Film in the Muhr AsiaAfrica Shorts competition at Dubai IFF in 2010.

The Russians Ivan and Maria live in a Kazakh village; and their Kazakh neighbours are Assan and his wife. When Maria gives birth to a son with Asian features, Ivan suspects Assan of fathering the child… Fifteen years later, their teenage son Sasha has quit school and spends all his time on horseback. Ivan is held responsible for all the ills in the family: and for sure, he does not know his lineage beyond the names of his grandfathers. Shown at Rotterdam IFF 2009 and Busan IFF 2009.

Gift to Stalin begins in modern-day Jerusalem. It is the home of Sabyr, a man who reflects on his traumatic childhood: in 1949 Moscow, the boy Sabyr and his family are deported. Believed dead, Sabyr is taken off the train amidst corpses, and saved by the old railway guard Kasym, who raises him in the steppe village with a community of other deportees. Soon the village prepares for Stalin’s anniversary. Opening Film of Busan IFF in 2008, and shown in Wiesbaden’s GoEast and Locarno IFF 2009.

Films are screened in the original languages with English subtitles.

The organizers wish to express their gratitude to Gulnara Abikeyeva and Gulbara Tolomushova for their invaluable assistance; to Olga Khlashcheva (Kazakhfilm), Gulmira Kerimova (Kyrgyzfilm); to Guillaume de Seille of Arizona Films; to Aliya Uvalzhanova and Boris Cherdabayev for permission to screen A Gift to Stalin; and last not least – to all the filmmakers.