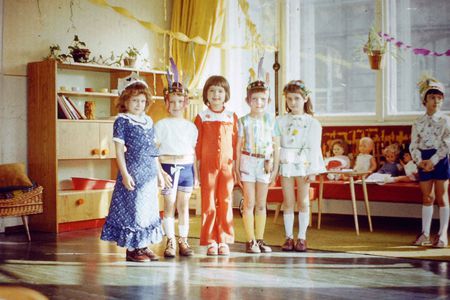 Unveiling of the art installation QR code by Gergely Barcza

Presented by the artist and Edit Barta, art aesthete, secretary of the Studio of Young Photographers, Hungary

In the 1970s and 80s a father in Budapest thoroughly documented on film from birth to adulthood the life of his sons Gyuri and Attila. He converted all the photos into slides that could be projected for viewing. In meticulous handwriting, the father recorded the date of each frame to ensure the captured moments would remain well preserved in the family’s memory. Over time, however, technology changed and as the use of slides went out of fashion, the father decided to digitize the hundreds of pictures he had taken. Having lost their function, the original slides became superflous and were subsequently disposed of.

Decades later, in the early 2010s, Gergely Barcza, an architect and artist in Budapest became interested in photo slides. To save money, he decided not to purchase new slide frames for his work, but rather second hand ones from local photo shops. As Barcza soon discovered, however, the photo shops did not bother to remove the original pictures from the used frames, but rather sold the frames with the old photos still encased. The images, Barcza quickly realized, served in terms of both content and style as a unique witness to the recent past. Pursuing now a different interest, the artist became an ardent collector of old, discarded photo slides. A friend, aware of his passion, passed to him a large collection of slides he had come across. The pictures captured a family’s life over 20 years – these were the images of the life of Gyuri and Attila.

Confronted with both legal concerns and moral dilemmas, Gergely Barcza decided to track down the family and meet Gyuri and Attila, whom he had never seen before yet already known quite well from the pictures. As luck would have it, the artist managed to find the family, who eventually agreed to allow Barcza to use their pictures in a public photo exhibition. The resulting artwork is a massive photomontage, which not only showcases private family memories but also encapsulates Hungarian society in the 1970s and 80s.

Today, people upload family photos to Facebook.  Thanks to the artist, Gyuri’s and Attila’s life is now also presented on Facebook. The myriad photo slides of the montage are arranged to form a giant QR code, which, when read with an appropriately equipped smartphone or other device, directs visitors to the online page of Gyuri and Attila.

The three meters by three meters art piece, QR code, which consists of 2.916 slides, will be permanently exhibited in the OSA Archivum's Goldberger House in Budapest. OSA is one of the internationally most well known archives of the recent past, displaying documents on historical events and eras in unusual ways. It is eminently suited, both spatially and spiritually, to display this work of art.