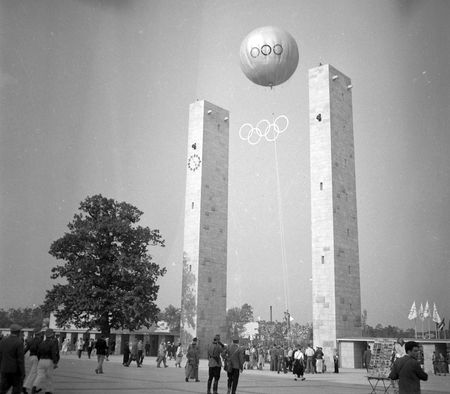 In the summer of 1936, two European cities planned to host major sport events: while Berlin was preparing for the Games of the XI Olympiad, Barcelona was getting ready for the Olimpíada Popular, the third Workers’ Olympics, which was intended to offer an alternative to the highly controversial Olympic Games organised by the Nazi regime. The opening of the Berlin Games was announced by fanfares, the music of Richard Strauss, and the sounds of the Olympic Bell; in Barcelona, the noises of war swept away the singing of thousands of workers who wished to take part in the Olimpíada. One day before the scheduled opening ceremony, General Francisco Franco and his troops staged a military putsch. Although the Workers’ Olympics was cancelled, some of the athletes remained in Spain, to fight on the Republican side in the Spanish Civil War. These two sporting events differed, however, not only in terms of their inauguration. The organisers of the Berlin Summer Games and the Olimpíada Popular held fundamentally different concepts of the social and political significance of sport, and used radically different approaches to present these ideas to international sporting communities, and to the public. And while with the Berlin Games, the Nazi regime went to great lengths to demonstrate its magnificence and splendour through spectacular buildings, decorations, and propaganda, it was in Barcelona and the Spanish Civil War where the world could, for the very first time, experience the realization of such propagandistic endeavours.

On the occasion of the 80th anniversary of the Berlin Summer Olympics and the Olimpíada Popular, the Vera and Donald Blinken Open Society Archives presents the exhibition Olympics and Politics – Berlin / Barcelona 1936,which examines how these international sporting events became the terrains for ideological and physical battles in the heavily politicised 1930s, and how the two Games acquired different political significance. Using archival sources (newsreel footage, films, photos, etc.), the exhibition views the two-week spectacle of the Berlin Games through the lenses of its counterpart, the Workers’ Olympics, and the war the Nazi ideology so pompously and magnificently promoted through its Olympics.

Hanns Eisler: The Anthem of the Olimpíada Popular (Barcelona) by the OSINGERS Small Choir, conductor Nikolett Hajzer and a 1936 Newsreel about the start of the Civil War in Barcelona

The exhibition is open between 10 a.m. and 6 p.m. every day except Monday from June 23rd until August 28th.