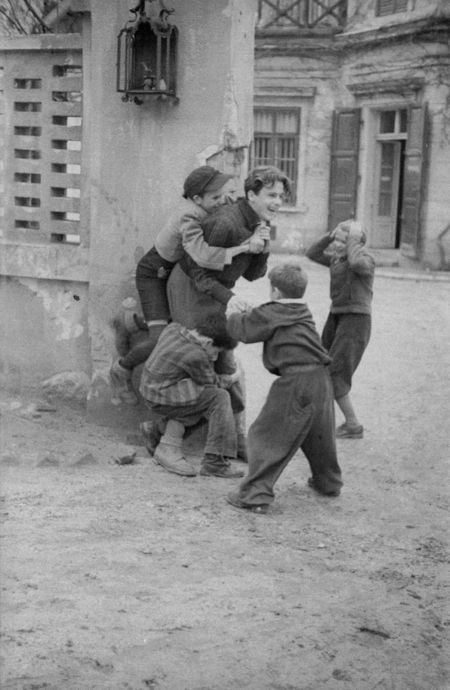 The exhibition closes on October 29, 2017, Sunday. As part of the finissage a guided tour will be held (in Hungarian) by the curator at 4:00 p.m.

In the framework of the program series What’s Left?, the Vera and Donald Blinken Open Society Archives organizes the exhibition Somewhere in Europe following the central theme of the OFF-Biennale, focusing on the utopistic community of Gaudiopolis.

Gaudiopolis or 'The City of Joy' was a children's republic, founded in the postwar years in Budapest by a Lutheran Pastor Gábor Sztehlo. In the aftermath of WW II, hundreds of children had to face the trauma of losing their parents or homes. Gaudiopolis provided a shelter for these children and a place where they had the opportunity „to become independent and confident citizens, familiar with practial matters and trained in theoretical issues, striving for a better self-recognition and self-criticism". A realized utopia, it functioned in the spirit of hope, trust, compassion, generosity, responsibility, perseverance, courage, and care until it was nationalized by the communist regime in 1950. The story of the Children's Republic was immortalized in the film Somewhere in Europe (1948, dir. Géza Radványi), in which many of the children from this community took part as actors.

While the short period between 1945 and 1949 was plagued by traumas and a deep sense of crisis and chaos, this era was rife with possibilities as well: various models of democracy were still at play amidst the ongoing social and political changes that would eventually lead to the totalitarian regimes in the Eastern part of the continent. Gaudiopolis was one of the many smaller communities in Hungary that set out to build a better world on the ruins of the previous one. The exhibition presents the history of Gaudiopolis along with similar initiatives which were most often born out of the courage, the perseverance and enthusiasm of private individuals (or smaller groups) driven by their beliefs in a just and equal society. These were individuals who tried to reform the political discourse, the cultural life and the education in their country, and who even though most of the times considered themselves as leftist, were later pursued and persecuted by the communist regime.

The research and exhibition project includes both archival materials and works of contemporary art reflecting on the ideas and realities of a Children’s Republic,  also exploring the period of the 2nd Republic of Hungary.

The exhibition is organized by the Vera and Donald Blinken Open Society Archives and the OFF-Biennale Association.

The main cooperation partner of this year's OFF Biennale is GfZK – Museum of Contemporary Art Leipzig. The cooperation project is funded by the German Federal Cultural Foundation.