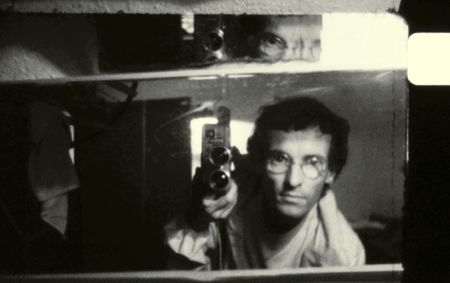 OSA presents András Szirtes's Film Diary 1979-2004: In search of exposition lost. Opening on September 10, the exhibition at Galeria Centralis presents the films,  drawing sketches, written notes and images selected by experimental filmmaker András Szirtes, who has been making films since the late 1960s. For the duration of the exhibition, Szirtes's films will be screened every evening from 7 pm with the active participation of the filmmaker.

Szirtes writes: “Some write diaries, others photograph them.

In 1979, having had directed a number of experimental films of international acclaim (Suburb, Birds, Dawn) and with about ten years of filmmaking experience, I wondered: what if I started keeping a diary on film tape, by way of “my fountain pen is my camera”, or “Man with the Movie Camera”?

I left it to my instincts to help the material find its own form. I filmed for 25 years, from 1979 to 2004, first with a movie camera and then with a video camera. What I had in mind was a series of 30-minute etudes, totalling 48 interrelated pieces which, together, would constitute a film epic of precisely 24 hours in length.

The exhibition presents my drawing sketches, written notes and images selected from the nearly 1.5 million frames. The 40 films I have made will also be screened in chronological order. These include Diary Parts 1 to 16 which, over the decades, have gained their final form.”