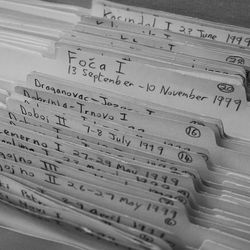 View Collection Items
Creator:
Physicians for Human Rights
Created:
1997-1999
Language:
English, Bosnian. Most reports are available only in English; however, some have both English and Bosnian versions.
Extent:
137 items
Note:
No accruals expected. The project was funded in part by the International Commission on Missing Persons (ICMP).
Summary:

The collection contains 137 forensic reports produced by the Physicians for Human Rights (PHR) during its Forensic Assistance Project (FAP) in Bosnia and Hercegovina in 1997-1999, documenting the extent and consequences of violence, as well as the humanitarian response of the international community in the immediate aftermath of the Yugoslav wars. Complementing the work of the International Criminal Tribunal for the former Yugoslavia (ICTY) and the International Committee of the Red Cross (ICRC), which operated in the region simultaneously, PHR worked with local Bosnian forensic teams on FAP and several related projects to exhume and document mass grave sites that were not designated for investigation by other organizations, and to collect unique personal information on victims from families and match them with data collected from postmortem examinations.

The Forensic Monitoring Reports summarize the findings from exhumations at over 500 sites and sub-sites across the country. The reports are of two types: Findings (1997-1998) and the follow-up Consultation Reports (1999). Each report offers a summary of events prior to exhumation and a detailed description of the exhumation process itself, a list of participants and observers (forensics, law enforcement, military, or local media), a description of the grave site and its history and, where applicable, a record of the postmortem findings. Reports often provide information on the circumstances in which individuals were killed and their alleged status (civilian or military), while the postmortem findings may reveal victims' identities.

The written account is supported with substantial visual documentation. With a few exceptions, each report contains several color photographs detailing various aspects of the exhumation process. Geographic coordinates for all grave sites and sub-sites are provided and represented on area maps by the US Department of Defense. Occasionally, hand-drawn maps or computer generated site diagrams are also available, showing field objects, the exact position of graves and orientation of bodies.