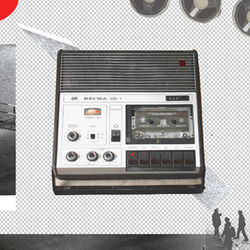 The collection contains 58 unique audio files that were produced and/or broadcast by RFE/RL’s Russian Service.

In 1995, as Radio Free Europe / Radio Liberty (RFE/RL) was shutting down in Munich, the Archives of RFE/RL’s Research Institute has been shipped to the newly established Open Society Archives (OSA) in Budapest. The shipment included over 6000 shelf-meters of material: over 40.000 books; East Europe’s largest periodicals’ collection; thousands of boxes and binders with paper documents; filing cabinets with manuscripts and records of RFE/RL; thousands of video cassettes and approximately 150 open-reel audio tapes with the legacy of the Soviet Samizdat Unit at RFE/RL.

The Soviet samizdat sound collection consists of approximately 100 audio recordings produced and preserved at the Samizdat Unit of Radio Free Europe / Radio Liberty in Munich, West Germany. The initial recordings consist of published and unpublished samizdat, created between 1970 and 1991.

The Published Samizdat part (58 recordings), nearly 18 hours of sound recordings was created between 1970 and 1989. These are the audio master files of the Samizdat Archive (‘Archiv Samizdata’). They include recorded telephone conversations between RFE/RL staff in Europe and the US, and opposition members in the USSR. Some of the original tapes however were smuggled out from the Soviet Union and archived by RFE/RL. These recordings shed light on how the Samizdat Unit operated and how the Western human rights activists gathered information from behind the Iron Curtain.

Some sound recordings were transcribed, edited and printed as Russian Samizdat - their AS numbers correlate to the sound files’ AS numbers; while others were aired at RFE/RL within its Samizdat program series.

By publishing and broadcasting Russian-language interviews with civilians, scientists, writers, church people or immigrants, RFE/RL offered new perspectives on the details of Soviet life. These sound recordings reveal what was life like for political prisoners in forced labor camps; for dissidents in psychiatric hospitals; for Catholics or Jews wishing to practice their faith. For the first time OSA makes this sound collection – a unique source for everyone interested in the nuances of the Cold War history – available on-line.

Use Conditions:
Ownership of and copyrights to the materials belong to RFE/RL, Inc., 1201 Connecticut Ave., N.W., Washington, DC 20036, USA. Permission to use the materials for purposes other than research and education shall be requested from RFE/RL, zvanersm@rferl.org.
Permanent URI: