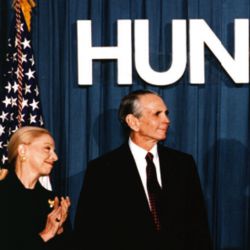 This collection contains 622 digitized items, including correspondence, newspaper clippings, photographs and ephemera created by Vera and Donald Blinken relating to, and accumulated over the course of, Donald Blinken’s ambassadorship as the first Ambassador of the United States of America to the Republic of Hungary after 1989.

Donald Blinken, a native New Yorker, Harvard graduate and former president of the Mark Rothko Foundation, accepted Bill Clinton’s appointment as Ambassador to the Republic of Hungary on September 14, 1993, and was sworn in by Vice President Al Gore on March 29, 1994. Donald Blinken concluded his service on November 20, 1997. He was the first U.S. Ambassador to receive the highest civilian honor of the Republic of Hungary and was also awarded the U.S. Department of Defense award for Distinguished Public Service.

Before taking up government service, Donald Blinken served as a member and later as the Chairman of the Board of Trustees of the State University of New York, the largest institution of higher education in the United States of America, from 1977 until 1990.  The documents covering his activities there are housed at the M. E. Grenader Department of Special Collections & Archives at the University of Albany.

Donald Blinken developed an interest in Hungary through his wife, Hungarian born Vera Blinken, who became a refugee in the United States of America after she escaped the communist country in 1950. She graduated from Vassar College with a degree in the History of Art and has been a member of the Board of Directors of the International Rescue Committee. Vera Blinken’s contributions to the ambassadorial mission were numerous. Among others, she founded Primavera, the first mobile breast cancer screening program in Central and Eastern Europe in 1996, which also helped to raise awareness about breast cancer. On December 9, 2005 at a ceremony in New York, Vera Blinken was awarded the Middle Cross of the Order of Merit of the Republic of Hungary.

In 2009, she and her husband, Donald Blinken, co-authored their memoir Vera and the Ambassador: Escape and Return.

Donald Blinken has served as the Chancellor of the International Council of Central European University (CEU) and subsequently as a member of its Board of Trustees. He and his wife Vera have been long-time supporters of CEU's Open Society Archives as well and provided a major bequest to sustain the institution and help fulfilling its mission. At a dedication ceremony on November 3, 2015, the Archives was renamed the Vera and Donald Blinken Open Society Archives.

The Vera and Donald Blinken Collection highlights include records relating to Hungary’s joining the NATO, the country’s post-Communist economic development and political opening. The collection also contains correspondence between the Blinkens and an array of American and European political dignitaries and figures from the international business world.