Through a Camera, Gradually Brighter 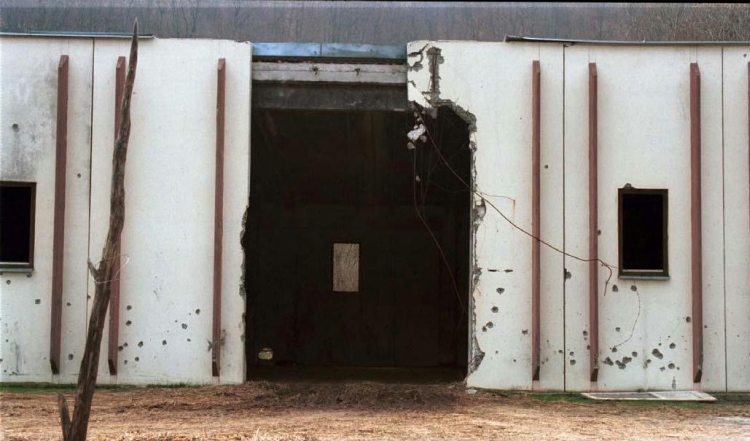 From Amateur and TV Footage to Court Sentence

In June, 2005, an amateur video was published thanks to the Humanitarian Law Center in Belgrade, which captured the members of the paramilitary group Scorpions in a forest near Trnovo, Bosnia and Herzegovina, executing six Muslim men from Srebrenica. The group infamous for its cynical brutalism was established by Slobodan Milošević's state security service in 1991, and supervised by his interior ministry from 1995; the video, shot by the perpetrators, was immediately presented during Milošević's trial, however, the International Criminal Tribunal for the former Yugoslavia (ICTY) did not include it into its list of evidence. As Milošević died in his prison cell in Scheveningen next year, we will never know whether the video would have affected the ruling. Still, Serbia's War Crimes Chamber sentenced the harmonious family of the perpetrators to a total of fifty-eight years in prison.

Forrás. [Source., or Boiling point] is a blog series by the Blinken OSA staff at the Hungarian news website 444.hu. This is a translation of Csaba Szilágyi's post that originally appeared on osaarchivum.444.hu, presenting the role of social media imagery in the struggle against impunity. 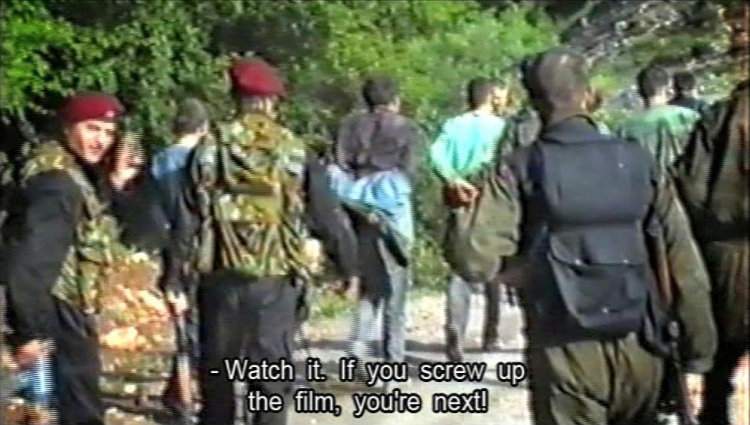 On July 11, 1995, the Bosnian Serb Army, under Ratko Mladić's command, occupied the Srebrenica area. Zoran Petrović-Piroćanac, a reporter from Belgrade, arrived with the soldiers, carrying special permissions that allowed him to film these first days, when the systemic execution of 15–65-year old civilian Muslim men began. When passing an agricultural warehouse in Kravica, Petrović-Piroćanac, for a second, turned his camera toward the building's entrance, and captured the piled-up bodies of people shot there, remarking, “some dead Muslim soldiers.” Meanwhile, Serbian soldiers in uniform hang around, gunfire is heard in the background. We now know that approximately twelve hundred civilians were massacred in the warehouse; after throwing in hand grenades through the windows, soldiers waited across the door to take down fleeing survivors.

The "on-the-scene report" was aired by the Belgrade Studio B channel the next evening in a special program; when editors realized that they had just showed visual evidence of the ongoing Srebrenica genocide, they quickly buried the tape. Petrović-Piroćanac erased the atrocious, few-second excerpt by overwriting it with other material; over the years, this doctored version of the film was presented at each ICTY trial related to Srebrenica.

Entrance of the Kravica warehouse in the 1995 TV report Operacija Srebrenica and in an ICTY investigation document in 1996.
(Blinken OSA Film Library)

Someone in the United States, however, was in the right place in the right time, and recorded the original version of the TV segment Operacija Srebrenica, as it was shown on Studio B, allowing prosecutors to admit this time the uncut footage. After Office of the Prosecutor investigator Tomasz Blaszczyk prepared the film's frame-by-frame analysis completed it with additional documents, geotagged photos, and witness testimonies, the unedited video was accepted as court evidence in 2013 in the case against Ratko Mladić. The sixteen accused of the Srebrenica trials, from Dražen Erdemović to Radovan Karadžić, received four life sentences and a total of 206 years in prison; Ratko Mladić, also sentenced to life imprisonment, awaits an Appeals Chamber ruling.

The significance of the Petrović-Piroćanac footage is also apparent in its fifteen mentions in different contexts in the Records of the International Monitor Institute (IMI), a collection preserved at the Blinken OSA. The more than five thousand hours of TV monitoring composing the collection were recorded and compiled at IMI primarily from Western and local TV channels reporting on war crimes, crimes against humanity, and genocides, in order to create a "Genocide Archive" also suitable to tribunals. The idea was not untested, IMI had developed its methodology while working with the predecessor of ICTY, the United Nations Commission of Experts investigating war crimes in the former Yugoslavia, between 1992 and 1994. On that occasion, a team of analysts, pro bono human rights lawyers, and law students, provided the Commission with approximately 230 evidentiary footages (also available in the Archives). These were supplemented with detailed, timecoded transcripts, still frames from videos, and keywords, presenting a prototype to the analysis and verification processes further perfected in the future, owing to the technological improvement of the 2000s.

In August, 2017, the International Criminal Court issued its first warrant of arrest based on evidence gathered exclusively from social media. The videos uploaded to YouTube and Facebook show Mahmoud Mustafa Busayf Al-Werfalli, a commander in the Saiqa Brigade of the Libyan National Army, talking to the camera, while shooting his victims down or commanding his soldiers to execute them. According to the warrant, Werfalli was responsible for the murder of at least forty civilian hostages between 2016 and 2018. Analyzing and verifying the perpetrators and locations visible on the footages was done by bell¿ngcat, an investigative journalistic network specializing in open-source intelligence, using satellite images, geotagged photos, newspaper articles and reports, and voluntary contributions from the community of open-source investigators. Following a second warrant of arrest issued in July, 2018, the court now waits for al-Werfalli's arrest or surrendering. 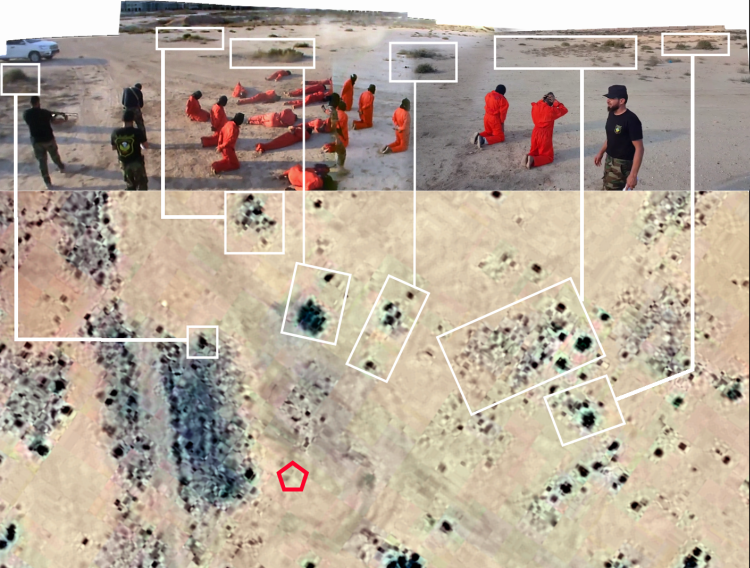 Above, panoramic view bell¿ngcat analysts assembled from execution video stills,
projected to a satellite image below by identifying vegetation and terrain formations.
(bellingcat.com)

As illustrated by these examples, (moving) images are on the course to gradually solidify their position as evidences in processes investigating and prosecuting human rights violations, crimes against humanity, or war crimes. Social media platforms produce content related to such subjects by the hour, which, in competent hands, can become crucial tools in the struggle against impunity. At the same time, an increasing number of archives collect and process such evidence, and prepare them for criminal cases.

Holding now more than 3.5 million videos, the Syrian Archive collects social media resources primarily on war crimes committed against the civilian population during the war in Syria, a conflict that has become international since its beginning in 2011. Professionals at the Syrian Archive have so far analyzed 650 thousand videos, and verified eighty thousand, uncovering two thousand incidents. Their mission is to provide both the international press and the war crimes courts with verified, reliable user-generated content, as well as with findings resulting from their use. The Berlin-based organization has pioneered in developing a methodology for the analysis of such sources.

Verifying the exact geographical location and the time of images capturing the February, 2020 bombing of the Idlibi hospital.
(syrianarchive.org)

The tools capable of capturing, verifying, and publishing visual evidence improve quickly. On December 1, 2020, on the 75th anniversary of the Nuremberg Trials, the United Nations Office of the High Commissioner for Human Rights and the Human Rights Center at UC Berkeley launched the Berkeley Protocol on Digital Open Source Investigations. This methodological guidebook sets common global standards for using public digital information, including photographs, videos, and other information posted to social media sites as evidence in investigating violations of international criminal, human rights, and humanitarian law.

Moving and still images from the online social media are today present in archives as well as court rooms. Compelling evidence on torture, unlawful executions, police violence against refugees, state harassment of human rights aids, dissidents, or minorities, will continue to be published, uncovering executioners and occasionally political commissioners as well. Preserving and verifying each recording is impossible, as investigating every incident is inconceivable. However, available tools certainly are becoming more efficient in indicting criminals. No perpetrator may sleep peacefully.