'The Source' and its Other: Hearing Past 'Reversed Jamming' in Information Items 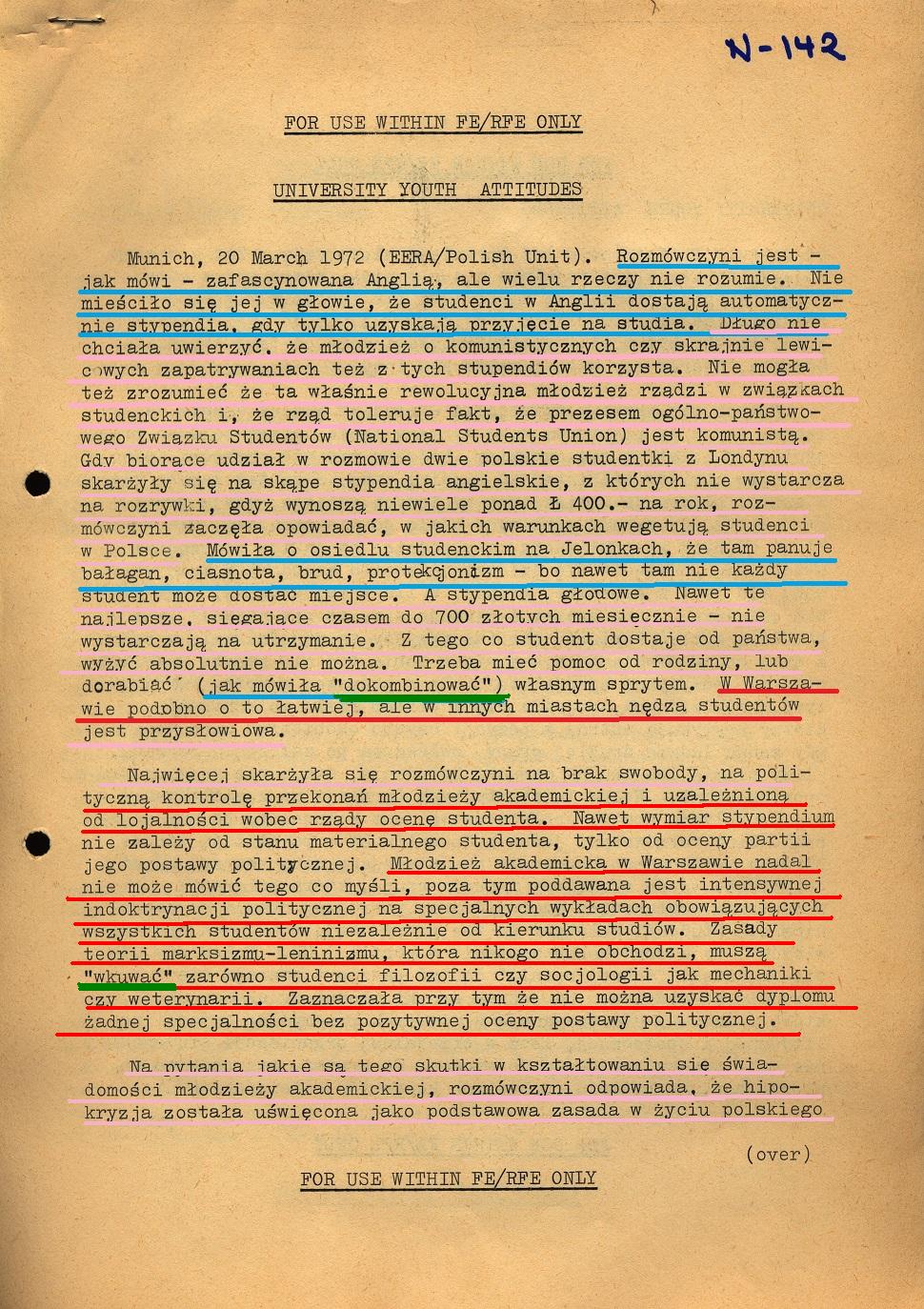 I have been asked to write about my experience of reading Information Items in the RFE Collection’s Polish Unit in OSA, and I would like to discuss the biggest difficulty I encountered in the process; a feature of the documents which can playfully be called reversed jamming or distorted polyphony.  Without being long-winded about my particular research aims, I was trying to learn something about students in 1970s Poland from the items produced specifically about students. Why was that so hard? The Items are documents produced from casual conversations between an RFE analyst and ‘the source.’ The source is often enigmatic; sometimes it is an unidentified respondent who claims to know the attitudes of youth, but more often it is a student from the University of Warsaw on an exchange in a Western city where RFE’s field offices were located. Direct letters from students to the editors are few and far between in the series. The typical Item begins with the formula nasz rozmowca twierdzi (the source tells us…) followed by a statement about their specific experience as a student in Poland, or their impressions from the West, their political views, and so on. Often, this precedes a variant of the formula ogolnie sie mowi w Polsce (generally, in Poland it is said/thought that…). At this point, the reader encounters polyphony. It becomes less clear who is speaking: the interviewer or the subject. In most cases, neither is presumably qualified enough in sociology to make a sweeping statement about youth opinions across the country. Is the analyst speaking through or for the source? Is the source speaking to the analyst? Often, the generalized statements about public opinion are backed by a second iteration of ‘nasz rozmowca twierdzi,’ in which case it appears that the source speaks with the analyst, without knowing it. The syntax of the finished Item leaves the reader exasperated as to whether s/he is reading the testimony of the respondent, or the stereotypes of the analyst, or the latter loosely supported by the former, or a fusion of the two.

In the attached image of Item 142/72, I’ve underlined in blue where it is clear the source speaks, in pink where it is ambiguous, and in red where I suspect the analyst is making her/his own statement. Those reading in Polish may break it up differently, but subjectivity really is the name of the game here. It is as if they are yelling over each other, but due to the nature of the conversation and its inscription, the analyst’s voice is much louder. The metaphor of reverse jamming comes to mind; the signal coming from the audience tothe radio is scrambled by the research division without the Communist state apparatus’ interference. Worse still, the signal coming to the historian is jammed. And this is the effect of distorted polyphony, at once a frustrating instance of what Derrida called ‘archival violence,’ and a disquieting reminder of Foucault’s rumination that ‘the document was always treated as the language of a voice since reduced to silence.’

But the source is not completely silenced here. If this text should be a point of advice to future readers of Information Items, it is this: don’t even open the first box before reading Carlo Ginzburg’s Inquisitor as Anthropologist. It reads as an unlikely handbook for amplifying the voice of ‘the source’ within Items.In writing the history of the Medieval occult based on Friulian witch trials, Ginzburg also encountered  the problem of texts distorted by the stereotypes of their writers. Ginzburg breaks through the distortion by applying Mikhail Bakhtin’s literary dialogic imaginary, and suggests that even within heavily controlled texts, one can detect a process of translation. The inquisitors always translate foreign ‘mythologies’ into their own codes of meaning. When documents such as witchcraft trials or the Items are read as sites of conflictual dialogue between author (analyst) and object (the source,) it becomes possible to find ‘cracks’ (underlined in green) in the text from which an alternative cultural reality may leak. This means reading with a greater sensitivity to anomalous moments or statements, vulgarities, slang, rare syntaxes, and surprises which evidence the codes being spoken by the source and their transformation into the codes of the analyst. We can also think of this as a process of apophasis; find the source by subtracting everything that is not the source.