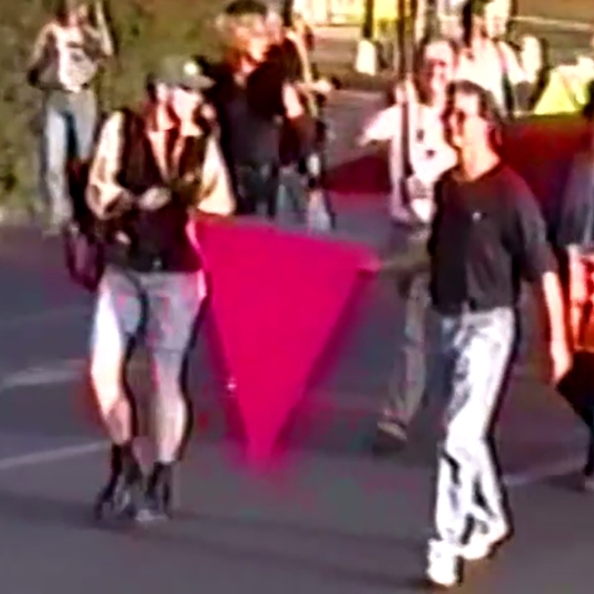 The Blinken OSA organized the online exhibition Records Uncovered in collaboration with the Háttér Archive and Library. The online exhibition intends to contribute to the uncovering and presentation of the unwritten histories of LGBTQI+ communities and movements. In support of this attempt, the organizers turn to the members of LGBTQI+ communities to help our project by donating personal documents! This effort echoes the aims of novel community or participatory archival practices, which strive to amend or overwrite dominant historical narratives.

Forrás. [Source., or Boiling point] is a blog series by the Blinken OSA staff at the Hungarian news website 444.hu. This is a translation of a post that originally appeared on osaarchivum.444.hu, introducing the exhibition Records Uncovered. 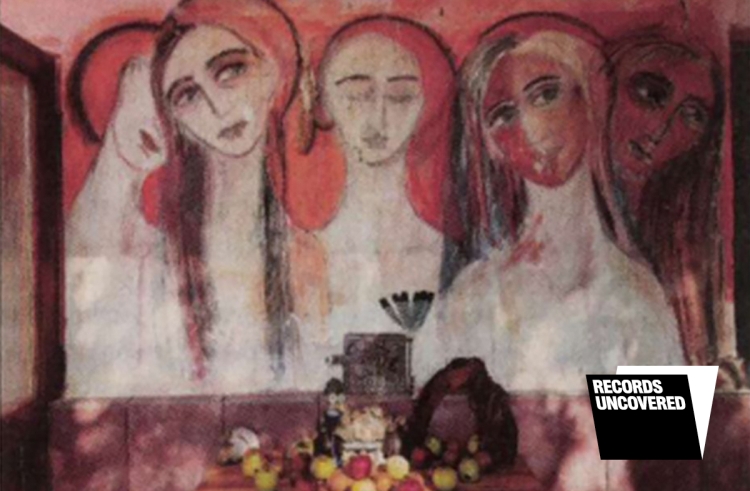 Fresco depicting five female figures in Szatina, the so-called “lesbian village.” Szatina, a dead-end village in Southern Baranya, occupies a rather peculiar place in the lesbian subculture of Hungary. The idea of founding a lesbian colony in Szatina based on environment-friendly principles dates back to the end of the 1980s, when the author Agáta Gordon moved there with her girlfriend and discovered that there was another female couple in the village. Later, their lesbian friends and acquaintances also moved to Szatina. There was a time when ten lesbians lived in the village, among them Mari Bán, Magdi Tímár and Gerda Schmied. After a while some of their friends also bought property there. The memory of the former lesbian community is still preserved on a porch wall depicting five female figures on the wall of the porch of one of the houses.
(Records Uncovered / Háttér Archive and Library)

Archives and archivists actively shape what may become parts of the historic memory of a society. Having a collection policy presupposes principles according to which archives differentiate phenomena to be preserved and phenomena not to be preserved (or not by the given archives). In an archives, documents deemed to be preserved do not hover in a neutral space either; following institutional guidelines, sources are arranged by archivists. This obviously has an impact on a document’s surroundings; they become parts or imprints of specific contexts and narratives, linked to some documents and distant to others. Beyond preserving them, archivists also process documents, noting down—to the best of their knowledge—essential information such as title, date of creation, genre, content summary, even adding geographic or thematic key words. Attaching these to sources establishes a preliminary framework of interpretation.

Opposing the traditional archival model described above, novel participatory practices have emerged. Taking the lead in this trend are community archives that collect the memories of specific, mostly minority communities, by involving the members of those communities. Why they choose not to turn to traditional archives? That may have become necessary because traditional archives often rely—for infrastructural reasons the begin with—on states or the elites, and their maintenance has become limited to archival professionals. Therefore, it is feared that the attention of archives cannot grasp society in its fullness. At the same time, many feel that, on the one hand, only (white, male) scholars with university degrees are allowed to enter archives and look at records, and, on the other, archives preserve records related to important people only. As a result, the memories of marginalized groups, as well as the knowledge essential to understand them, may remain outside the archives, preventing their histories from becoming parts of the collective memory. 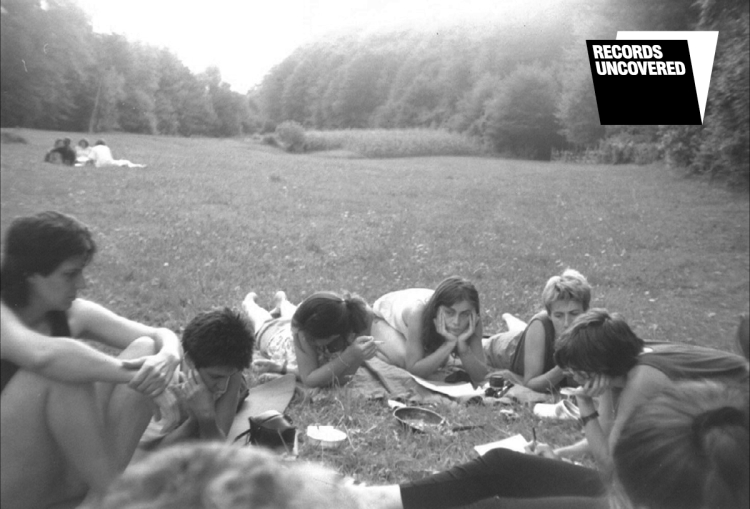 Lesbian camps in Yugoslavia, 1988 and 1989. The first lesbian camp in SFR Yugoslavia was organized by the Lesbian Lilit group. It took place on the Rab island between August 10-24, 1988, gathering around 30 participants from West Germany, England, Ireland, Portugal, Austria, the Netherlands, and Yugoslavia. The next year they organized another camp on the Soca river, gathering lesbians and feminist activist from Slovenia, Croatia, and Serbia. Lesbian camps continued being an important socialization, communication, and organizations-building events among lesbian initiatives even after the disintegration of SFR Yugoslavia.
(Records Uncovered / Courtesy of Lepa Mlađenović)

Departing from the traditional archival model, participation may bring beneficial changes to many aspects of the archival profession. Access to archival collections should be made as simple as possible to anyone, but especially to the very social groups whose histories the documents capture; they should be involved into processing tasks as well. This is in the interest of archives, too, as the knowledge of affected individuals can provide more accurate descriptions and reveal new links. Moreover, should such contributors decide to include personal records into archival collections, those would become more complete with new types of documents. Meanwhile, participants can learn about their own histories, which may be an empowering experience heightening the social value they attribute to themselves.

The online exhibition Records Uncovered came into being as a result of bringing together the holdings of two archival institutions based in Budapest: the Háttér Archive and Library, which is the oldest and largest LGBTQI+ archives in Hungary, and the Vera and Donald Blinken Open Society Archives. The Blinken OSA is a repository of important collections on the history of Communism and human rights. For this exhibition, we researched the documents that inform us how the societies in the former Eastern Bloc, SFR Yugoslavia, and Albania, shaped and constrained the lives of LGBTQI+ communities, and also how the latter were raising their voices in the public sphere. These are presented through less researched and previously undiscovered archival materials. The making of this exhibition required these documents to be “uncovered”—by interrogating the social, cultural, and political contexts of their creation, and by revealing the tacit narratives concealed in archival classification and labeling—in order to embrace the multivocality of the records. 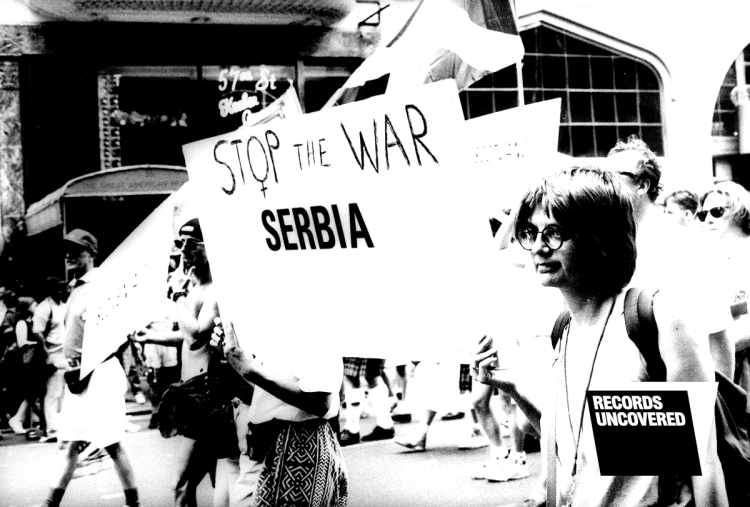 Photo of Lepa Mlađenović at a demonstration, 1994. Mlađenović has been one of the most outspoken lesbian activists in former Yugoslavia and Serbia, and an anti-war activist. She was also the founder of the first SOS phone line for women and children victims of violence in Serbia, which was of key importance for the development of feminist and lesbian activism in the country during the war. Her article Notes of a Feminist Lesbian during War is the most illustrative expression of the specific socio-political positionality of lesbians during the Yugoslav War.
(Records Uncovered / Courtesy of Lepa Mlađenović)

The documentation about the lives and activism of gay and lesbian persons and groups has been unsystematically collected and classified in archives. And in cases where this documentation has been systematically collected and preserved, it mainly reports on the life of gay men and gay activism, sidelining the histories of lesbian, bisexual, and transgender people. This unjustifiably strengthens the representative position of gay men as most dominant among the LGBTQI+ population.

Your contribution is welcome!

Diversifying our sources provides a more even representation of histories within and between different LGBTQI+ movements. However, we are aware that absences cannot be supplemented solely by relying on our capacities and efforts as archives. They require a collective action in which our archives and the respective LGBTQI+ communities make collaborative efforts toward enriching, critically examining, and diversifying our common LGBTQI+ heritage. To include as many different voices from the LGBTQI+ movement as possible, we welcome contributions from our visitors. You may lend or donate textual and audiovisual documents and (photos of) personal effects connected to the history of LGBTQI+ persons in Central and Southeastern Europe in the period 1945–1999. 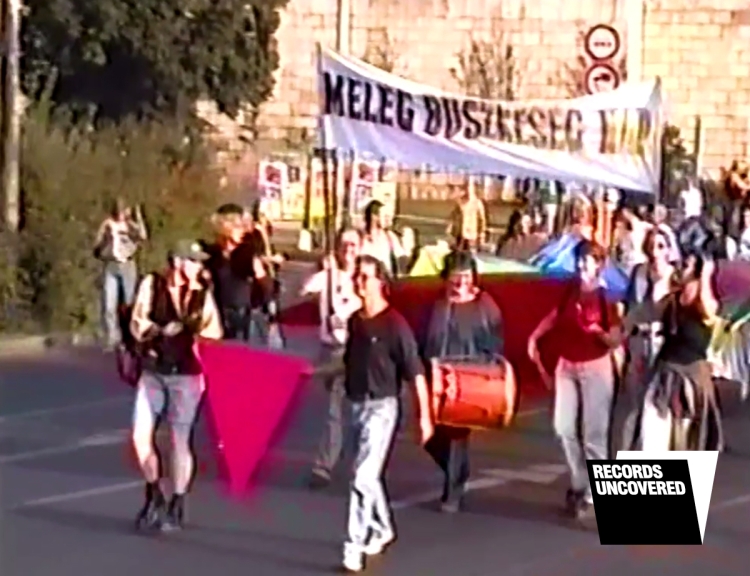 Day of Gay Pride march, 1997. As a successor to the Pink Picnics, the first pride march in Budapest was organized on September 6, 1997, under the name “Day of Gay Pride.” Participants carried banners, whistles, and drums, and a large pink triangle at the front of the procession. The march started from the Capella Café, and proceeded through the Danube Promenade to Vörösmarty Square. Here, one of the organizers, the journalist Balázs Pálfi, who called himself a “public fag” gave a speech, and the participants lit candles to commemorate the gay and lesbian victims of the holocaust (according to other sources, the gesture was to commemorate Lady Diana, who had passed away not long before the event). Due to its rather fast pace, the first pride was called by Sisso, a journalist for the weekly Magyar Narancs, the “fastest sand drift,” which is a pun playing on the Hungarian word “homok,” meaning both “gay” and “sandy”. Since 1997, the march has been held every year—with the exception of 2020—and since 1998 it has been part of the LGBT festival.
(Records Uncovered / Háttér Archive and Library, courtesy of Douglas Conrad)

Pending on your decision, your documents will be considered either for the (online or physical) exhibition, or the permanent thematic collections of the Blinken OSA (or both). The descriptive environment, as well as the terms and conditions of access to and use of your documents will be mutually agreed upon on a case-by-case basis. Contact us to contribute at records_uncovered@osaarchivum.org!