Our Invisible Enemies! Educational Film on Epidemics from 1950s Hungary 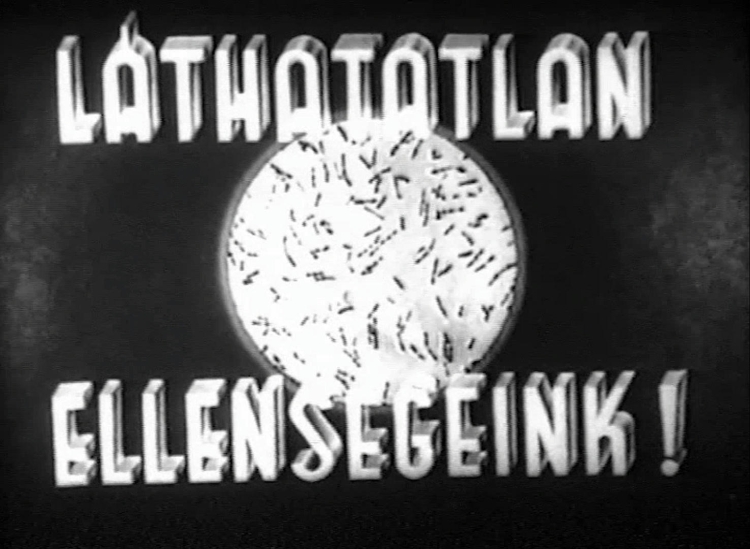 In 1954, the Hungarian News and Documentary Film Factory produced a film, titled Our Invisible Enemies!, under the supervision of the Ministry of Health. Beyond educating on infectious diseases, the film also served the purpose of promoting state measures. Therefore, it should be approached as the imprint of such dual efforts. Preserved and digitized at the Blinken OSA, the film Our Invisible Enemies! is now available on the Archives's YouTube Channel, with English subtitles:

Forrás. [Source., or Boiling point] is a blog series by the Blinken OSA staff at the Hungarian news website 444.hu. This is a translation of Miklós Zsámboki's post that originally appeared on osaarchivum.444.hu, introducing the film Our Invisible Enemies!

Our Invisible Enemies!, dir.: Dezső Varasdy, 1954
(HU OSA 394-0-1 Records of the Film Studio of the Hungarian Ministry of the Interior)

How to view the film? 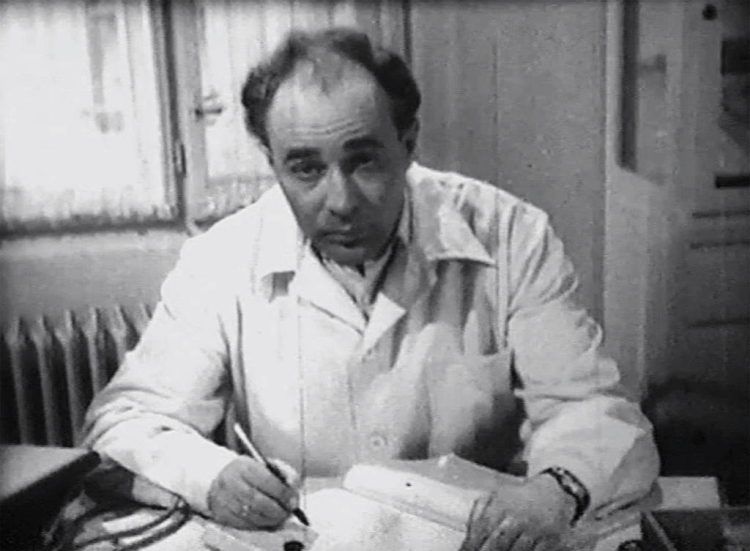 The doctor figure in the film Our Invisible Enemies!
(HU OSA 394-0-1 Records of the Film Studio of the Hungarian Ministry of the Interior)

“As we go on with our everyday lives, contacting each other, we constantly make grave mistakes.”

What does the film Our Invisible Enemies! reveal from all the above? In line with its purpose, the film is simple. A healthy individual arrives at the (crowded) doctor's office, asking for information: why are there more sick people than usual? The doctor immediately makes it clear: it is because of “people's unawareness, carelessness, even irresponsibility.” Furthermore, the distrust toward vaccines, in spite of the achievement that the “five-year plan realized one of the most advanced vaccine plants in Eastern Europe, more than covering our country's vaccine requirements.” Had everyone realized “that personal protection is a duty, for the sake of themselves, their families, and fellow men,” the film hints, the social utopia of the ending scene would come; people apparently not having to work are not only healthy, but happy, too, with women sunbathing on terraces, and half-naked, masculine men playing in the snow.

The didactic narrative is in stark contrast with the film's creative visual solutions. It was shot at the Hungarian News and Documentary Film Factory, a state company employing the film professionals who stayed in the country, thus the artistic quality. The cinematographer, for example, was the young Tamás Somló, who worked at the film factory before becoming Miklós Jancsó's regular partner shooting the director's initial films like Cantata, The Round-Up, or The Confrontation. It is most probably his achievement that the two long sequences (making up most of the film) are able to depict the spread of infections without commentary. First, the camera explores an imaginary building floor to floor, exposing irresponsible people touching food in groceries, sneezing on office equipment, greeting each other with kisses, and visiting sick friends. Then, the film carries out what we may call today contact tracing, identifying the source of a little girl's diphtheria infection, from the sweets eaten on the tram, to a handshake between her mother and an acquaintance, to the kiss the acquaintance had given to his son also infected with diphtheria:

“If only they knew the facts proven by statistics! . . . they would be more open to the state taking care of their children.”

By featuring a doctor to deliver the lecture on diseases, the film indicates expertise as the authentic voice concerning the issue. Already in advance, the playful microscopic images of viruses and bacteria composing the opening credits display a scientific mood as well. The latter is the work of László Tátrai, whose contribution to the film is also noteworthy. His animations are supposed to maintain the scientific tone, while visualizing complex, abstract phenomena in a comprehensive way. The montage depicting how droplet infections are transmitted begins with an anatomic drawing that cuts to a film clip of a man sneezing, outlining the number of pathogen-carrying droplets released to the air (which eventually end up on the open pack of cigarettes of the doctor smoking while treating patients):

Understanding the statistical data proving the efficacy of vaccination is aided by an animated infographic that, even if somewhat bizarre, is remarkable for its time:

The film arrived at the Blinken OSA on 35mm reels, and was first copied to VHS, and later digitized. It belongs to a larger collection of films created at the film studio of the Interior Ministry. These films were partly used in the professional and political training of police, state security, and border patrol personnel, and partly in wider propaganda. Shot at the News and Documentary Film Factory and under the supervision of the Ministry of Health, the production background of Our Invisible Enemies! is different. Yet, it was not necessarily only by chance, that a copy had ended up among the instructional and propaganda films circulated within the Interior Ministry, and consequently in the collection preserved at Blinken OSA, one of the world's largest archives on the history of Communism.