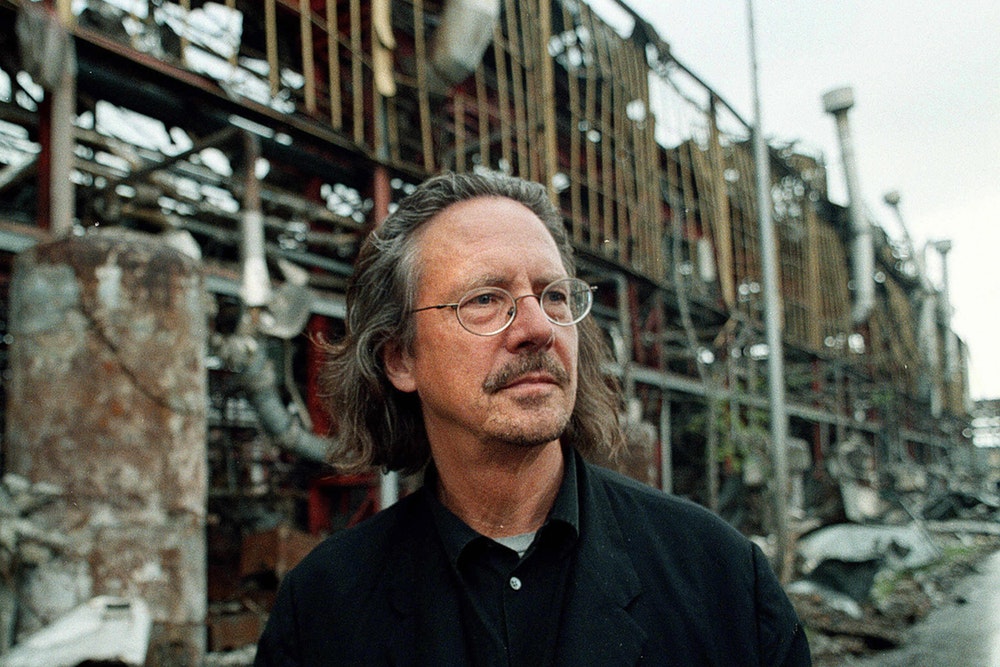 On October 10, the Swedish Academy announced that Peter Handke was awarded the Nobel Prize in Literature for 2019. The Committee elaborated its choice with the claim that Handke produced “an influential work that with linguistic ingenuity has explored the periphery and the specificity of human experience.”[1]

Mass of reactions followed worldwide. The public has been familiar with Handke’s support for Slobodan Milošević during the Yugoslav Wars in the 1990s, as well as with his questioning, minimizing, or denying of the Srebrenica genocide. Several records within the Balkan Collection at Blinken OSA contain interviews with Handke from 1999 that complement this reputation as an apologist of Milosević, the political leader responsible for heinous mass atrocities during the recent Yugoslav Wars.

As many—ranging from prominent writers and politicians from the Balkan region to the Mothers of Srebrenica and other civil organizations—have observed, awarding Handke was a slap in the face to the victims of mass atrocities committed by the Bosnian Serb Army and Serbian paramilitaries during the Yugoslav Wars. Yet, the Nobel Committee for Literature didn’t seem to share this opinion. In an interview after the announcement, the Chairman of the Committee, Anders Olsson claimed that they award a “literary prize, not a political one,” implying that the Nobel Prize in Literature should be bestowed to the ones that satisfy specifically literary standards, as Handke, in their opinion does.[2. 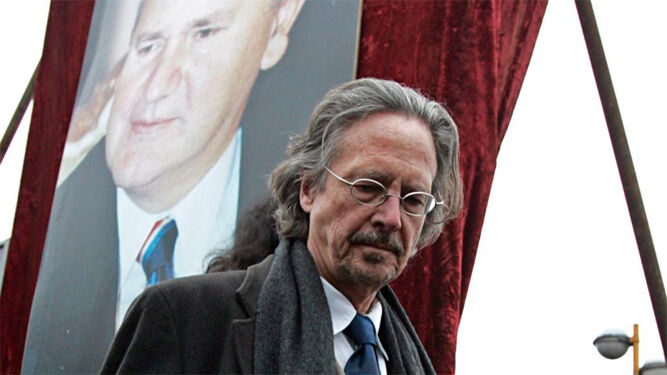 The question that struck most of us after the shock of the announcement was whether this justification for awarding Handke was at all acceptable? The answer is a clear: no! Can the Nobel Committee release itself from the obligation to apply moral considerations as addition to these narrow measures of literary excellence for the Nobel Prize? The answer is again: no!

At first instance, the prize in literature is supposed to be awarded for “an outstanding work in an ideal direction,"[3] where “ideal direction” is widely interpreted as including extra-literary and primarily moral criteria. A person who has been a genocide apologist is far from satisfying this criterion.

But even if it wasn’t for this formal and explicit requirement, the Committee would still be obliged to include moral considerations in their decisions for awarding the prize. There is a normative expectation that a prize of such universal acclaim as the Nobel Prize promotes not only a work, but a person, an intellectual, who, due to this universal acclaim of the prize, would enjoy the esteem of humanity in general. For the victims of the Srebrenica genocide and all the decent humanity, Handke does not satisfy this criterion either.

One may question whether there really are normative expectation of this kind in regard to the Nobel Prize in Literature? When asked by journalists about the award, Handke said that it was a “brave decision by the committee.” I am skeptical about it! Just imagine how many of the aesthetes in the Nobel Committee for Literature would have dared to make the same decision in the second half of the 1990s, not much after the Bosnian War? How many of them would have had the “bravery” to award Handke on exclusively literary grounds in 1999, when Kofi Annan submitted to the UN a report about the occurrences in Srebrenica, which Handke has been apologist about? If our moral intuitions do put normative constrains on awarding Handke then, why wouldn’t they be relevant nowadays? A “bravery” in those years would have undoubtedly stripped down that Nobel Committee of any credibility to bestow a prize of universal acclaim. And this would have been so not because of their lack of sufficiently sharpened aesthetic senses in evaluating Handke’s work, but rather because of their complete moral numbness in light of a genocide apology.

Among the records of the International Helsinki Federation for Human Rights at Blinken OSA, there is a text entitled On the writer and his integrity, delivered as a keynote speech at the Cultural Symposium in Budapest, in 1985, by Per Wästberg, a member of the current Nobel Committee for Literature. As Wästberg elaborated “literature is always on a collision course with the autocrats . . . . any published line is a social action.” How Handke’s essay, A Journey to the Rivers: Justice for Serbia could possibly fit in Wästberg’s views on literature is not easy to see. Moreover, in the same text Wästberg reminds us that “[literature is] no reserved space. There are no protected areas where we can live and work, untouched by the volcano that erupts somewhere else, by the typhoon that ravages another part of the globe. Freedom and the creation of art exist today in the era of radioactivity. And just as radioactivity penetrates the most distant corner so that no country and no man can be entirely spared, so the crisis for freedom and justice will sooner or later reach everyone. If we stand by like innocent observers, others will one day look upon us without compassion.” Again, taking these considerations seriously, it becomes even more than difficult to see how the Nobel Committee for Literature is not just a bystander in a crisis of justice, but a legitimizer of an injustice: an injustice confirmed by two international courts!

It is important to mention what I am not claiming to be the case here. I am not arguing for any kind of a general submission of the artwork to the moral rigors of our time, as some have done it in the past few days. I don’t find this to be a plausible objection against Handke’s Nobel Prize either. One can make, and in most cases, should make a difference between the author and the work. One can certainly read Handke and appreciate his literary talent, as one can read and appreciate the works of Celine, Hamsun, or Pound. I am also not claiming that because of his political or moral views Handke is not “eligible” for any recognition in a form of award. Perhaps many share the opinion of the Austrian President Alexander Van der Bellen to return what they “owe” to Handke[4] for his contribution to the Austrian literature, culture, or something alike. 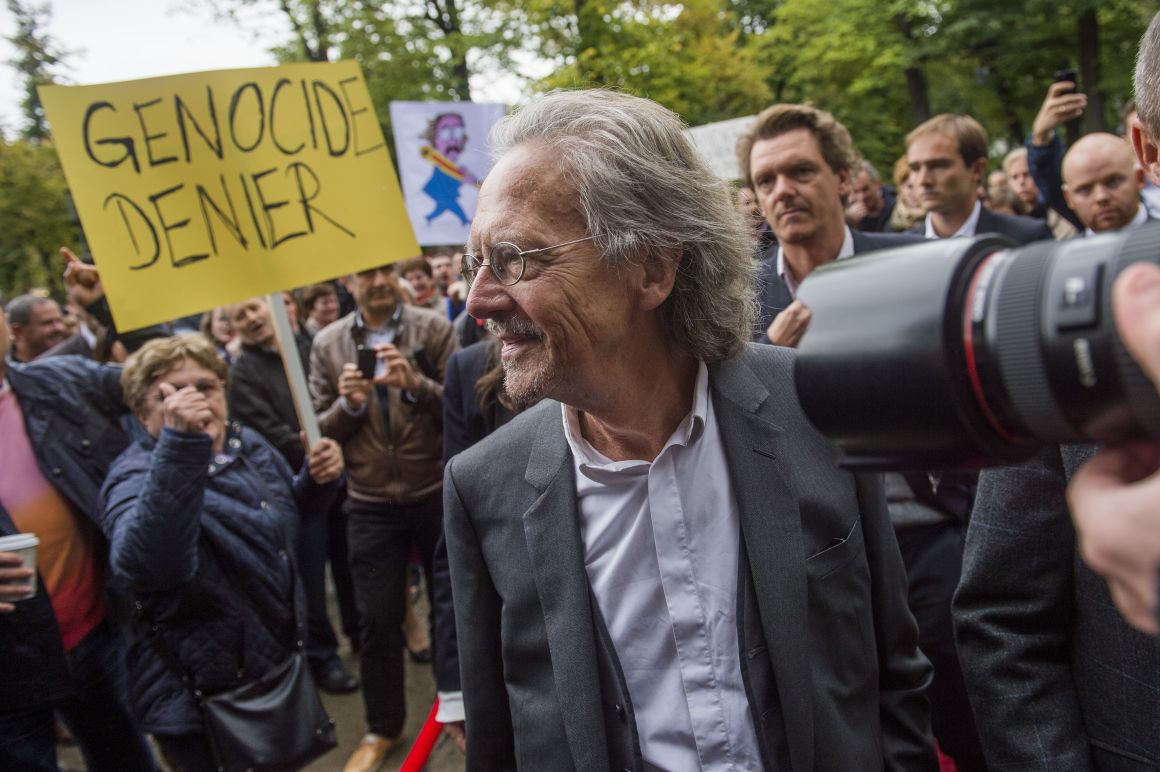 None of these options, however, were available to the Nobel Committee. The Nobel Prize in Literature enjoys the esteem not of an exclusively literary achievement, but of a paradigmatic intellectual achievement recognized worldwide. The scope of the enjoyment of this esteem is not within a specific national culture or literary community, but the universal humanity. If there is still space for the Nobel Prize not to be a “false canonization of literature,”[5] beside its already too long and too deep “Western” and sexist bias, then exhibiting moral sensibility, especially in light of a genocide apology, should not be seen as an external criteria to the decision to bestow the Prize, but rather a minimum requirement for evaluating the “ideal direction” of an outstanding work of literature. While the controversies around the Nobel Prize in Literature from the past years are pressing, thinking that they can be bypassed by focusing on narrow literary criteria for the Nobel Prize, is nothing but another wrong turn by the Nobel Committee for Literature.

[5] As Handke has characterize the Prize few years ago.