The Poland 1968 Digital Collection focuses on the March 1968 Polish student rebellion and its aftermath. 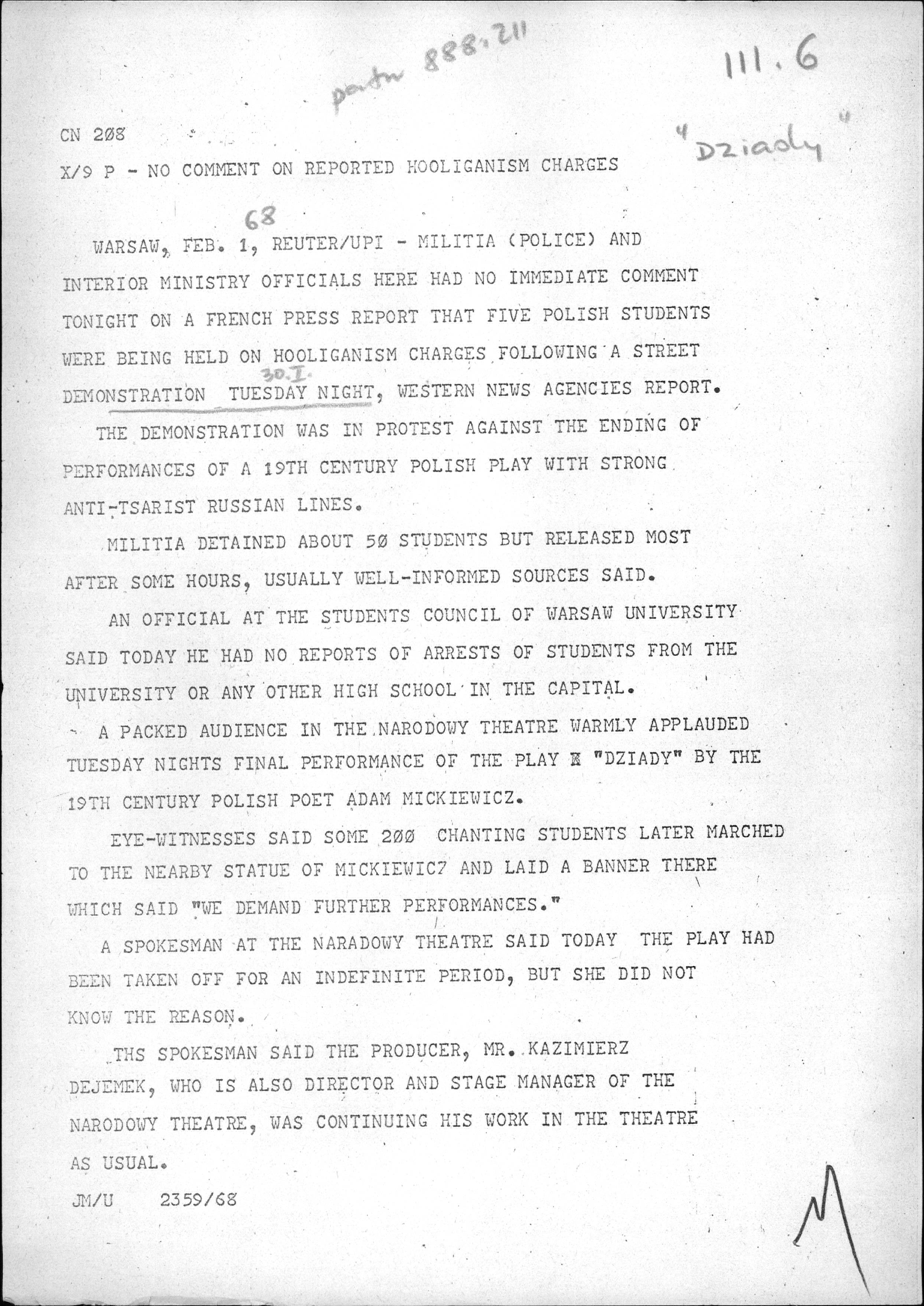 Radio Free Europe covered the events from the very beginning
This unique selection of documents from the records of the Radio Free Europe/Radio Liberty Research Institute focuses on the March 1968 Polish student rebellion and its aftermath, including the political trials that followed it and the anti-Semitic campaign that led to the emigration of roughly 13,000 Polish Jews. The 2,500 documents presented here include the Monitoring of the Polish Radio and Television, Polish and foreign press clippings, as well as other Radio Free Europe materials like telegrams, situation reports and press surveys.

Few theater performances had as far-reaching consequences as the one given at the Warsaw Teatr Narodowy on Tuesday, January 30, 1968. That evening, the national theater company performed an adaptation of Forefathers’ Eve (in Polish: Dziady), a poem written by the 19th century poet Adam Mickiewicz. This was the last performance in a series of fourteen shows, as the play was to be taken off “indefinitely”. The reason: an allegedly overenthusiastic reaction of the audience to the anti-tsarist, anti-Russian lines in the play.

After the show, a group of young people staged, in front of Mickiewicz’s nearby statue, an ad-hoc demonstration that ended in dozens of arrests. The detained were soon released, but a few weeks later two students, Adam Michnik and Henrik Szlajfer, were expelled from Warsaw University in connection with the protests. On March 8, 1968, demonstrations broke out in Warsaw, protesting against the firing of Michnik and Szlajfer. The participants were brutally attacked by the police. This only added fuel to the fire as in the following days and weeks demonstrations spread to the entire country, including major cities  such as Gdańsk, Kraków, Łódź, Poznań, and Wrocław.

The March 1968 events occurred against the backdrop of a deeper crisis in Polish society and politics. The Polish Party was split between First Secretary Władysław Gomułka and Mieczysław Moczar, Minister of the Interior, who was a proponent of more radical, nationalist politics. Following the Six-Day War of June 1967 and the Soviet Bloc countries (except Romania) breaking off relations with Israel, a growing anti-Semitic, “anti-Zionist” sentiment among the population was recklessly fueled by the government,  especially by Moczar. There was widespread discontent among intellectuals in general, and in literary and university circles in particular, with the ever tighter control over intellectual life, and especially, over the universities. The general population decried the decline in living standards caused by price hikes and the unstable economic situation induced by a looming currency exchange. Finally, the reforms introduced in neighboring Czechoslovakia and the brewing social conflicts in the West of Europe forecasted turmoil to spread to Poland as well. 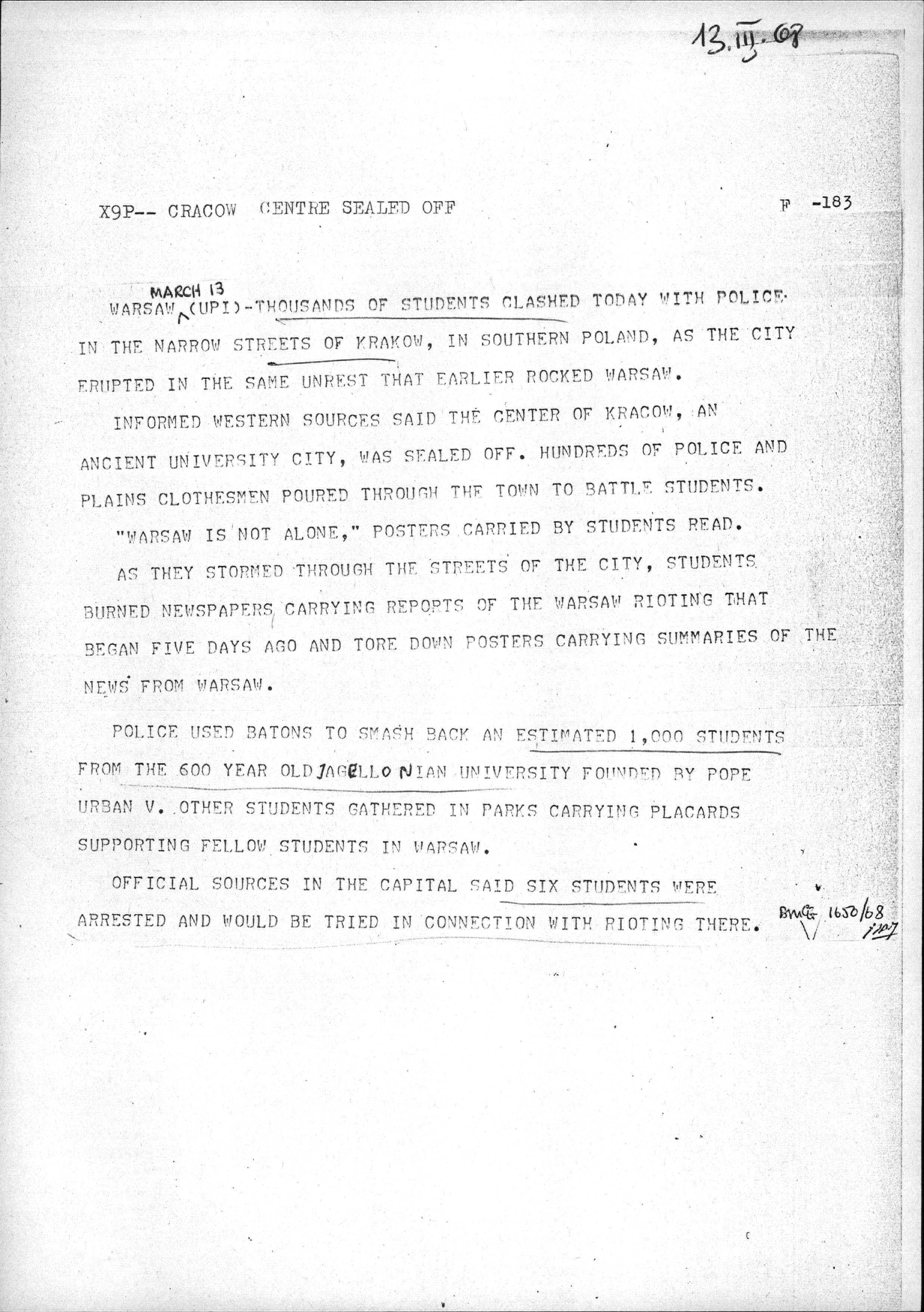 Geographical coverage of the crisis extends to major towns of Poland, including Kraków

Half a century after the March 1968 events, the Vera and Donald Blinken Open Society Archives (Blinken OSA) initiated a research project devoted the topic. Two Polish interns, Ewelina Sikora, and Jakub Gawkowski were hired to forage among the archival records of the Polish Unit of Radio Free Europe’s Research Institute. Their searches produced thousands of documents in connection with the Polish crisis of 1968. The documents are varied; they include the monitoring of the Polish Radio and Television, Polish and foreign press clippings, as well as Radio Free Europe (RFE) documents including telegrams, situation reports and press surveys. The interns also found typescripts of lists of arrested and dismissed university students and professors, compiled by the staff of the Polish Unit of RFE. More interestingly, they “discovered” a 287-page, indexed chronicle detailing the country-wide events of March and the subsequent months leading up to the student trials of 1969. 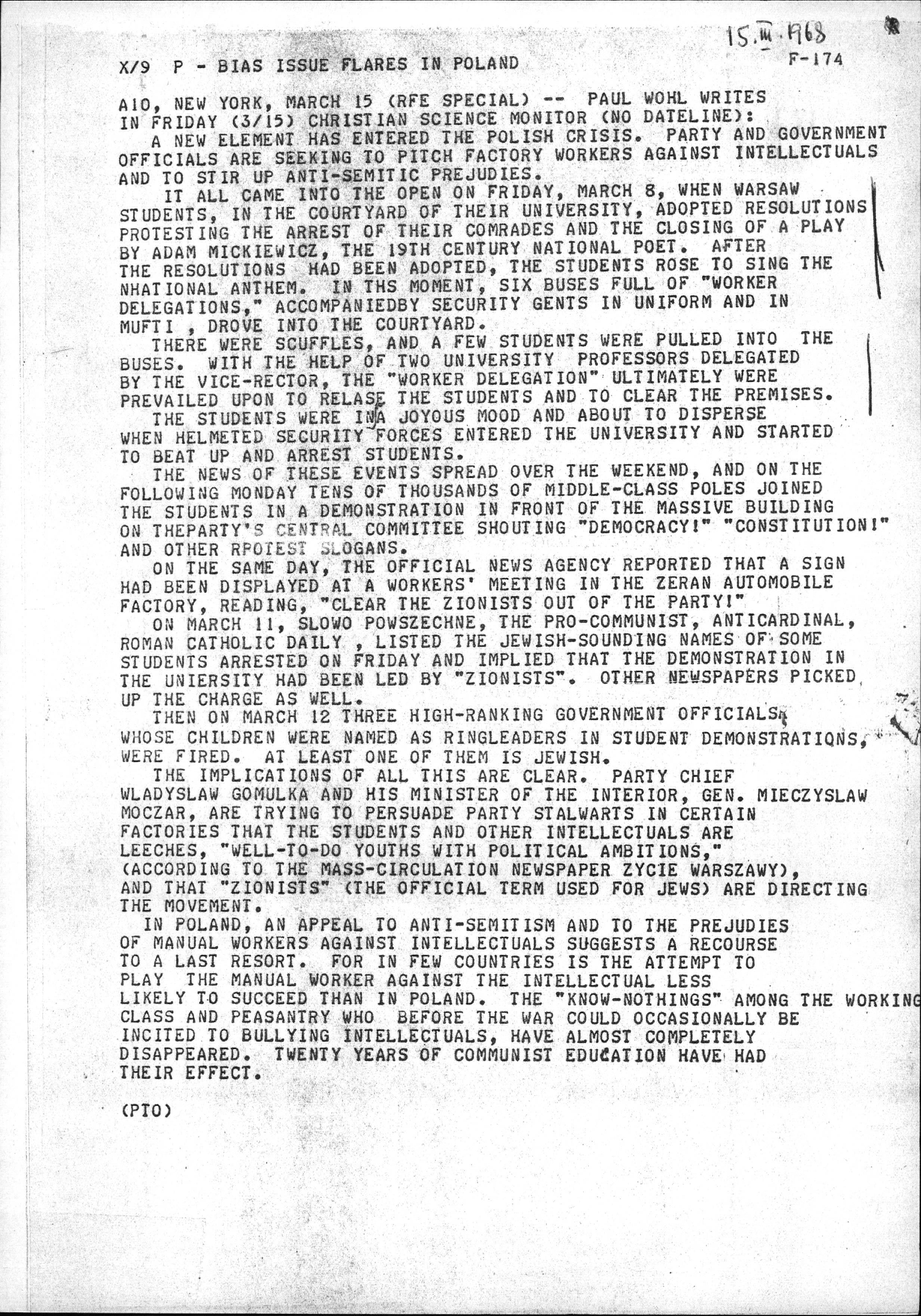 It is from among these records that about 2,500 documents in Polish, English, German and French have been scanned and made public in a collection dedicated to the March 1968 events. During their work on the collection, the two interns acquainted themselves not only with the content of the documents and with the historical context of the events they are describing, but also with the menial task of harvesting metadata used in the construction of a digital collection. Web Services Officer Károly Timári built a timeline-based website in which documents can be viewed in their chronological succession, or a selection can be made by specifying a date range. Searches are also possible based on keywords in document titles. The documents deemed most important are presented separately in a Highlighted Documents section. 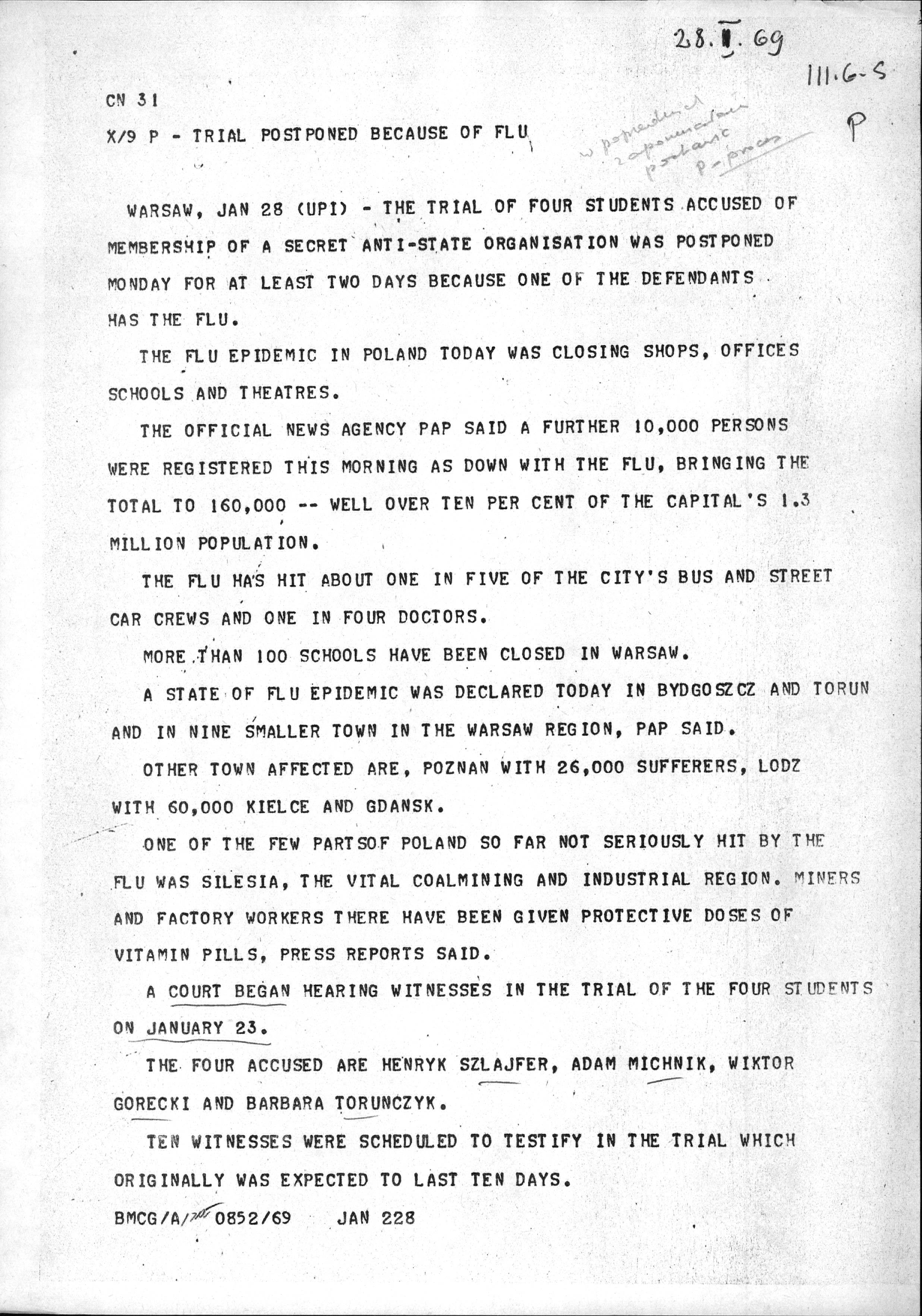 Trivia: In early 1969, the student trials were interrupted by a massive flu epidemic

Blinken OSA’s “Poland 1968” digital collection can be accessed at http://poland68.osaarchivum.org/.