Euphoria – Tinkering, Instead of Final Answers

The exhibition EUPHORIA? at the Capa Center is open to visitors only until February 23—the exhibition addressing the 1989 regime change also includes material from several collections that are available at OSA.

"Euphoria—this is the word that seems to express the most accurately the intense feelings the change of regime in Hungary provoked amongst those who welcomed it,” writes the curator Emese Mucsi in the exhibition's introduction. In the title, however, the word "euphoria" is followed by a question mark, suggesting that it is not yet possible to approach the 1989 regime change in indicative mood. Or, as historian Gábor Gyáni put it in his opening remarks, "not yet a cultural memory, 1989 belongs to the realm of communicative memory; unlike frozen history, it is a living memory, capable of having an effect." Consequently, the exhibition, instead of issuing final answers and exclusive statements, intends to create an opportunity to get in touch with 1989. This is also apparent in the exhibition concept, which, as a significant gesture, expands the spectrum of people invited to join this dialog and, in images, share their experiences; the photos at the exhibition depict not only the figures defining the regime change or the emblematic events of 1989, but also the random, seemingly insignificant, and therefore very much authentic moments of ordinary people.

Several photo series and videos of the exhibition are selections from larger collections preserved at OSA. These collections are open to research in their entirety in the Research Room. 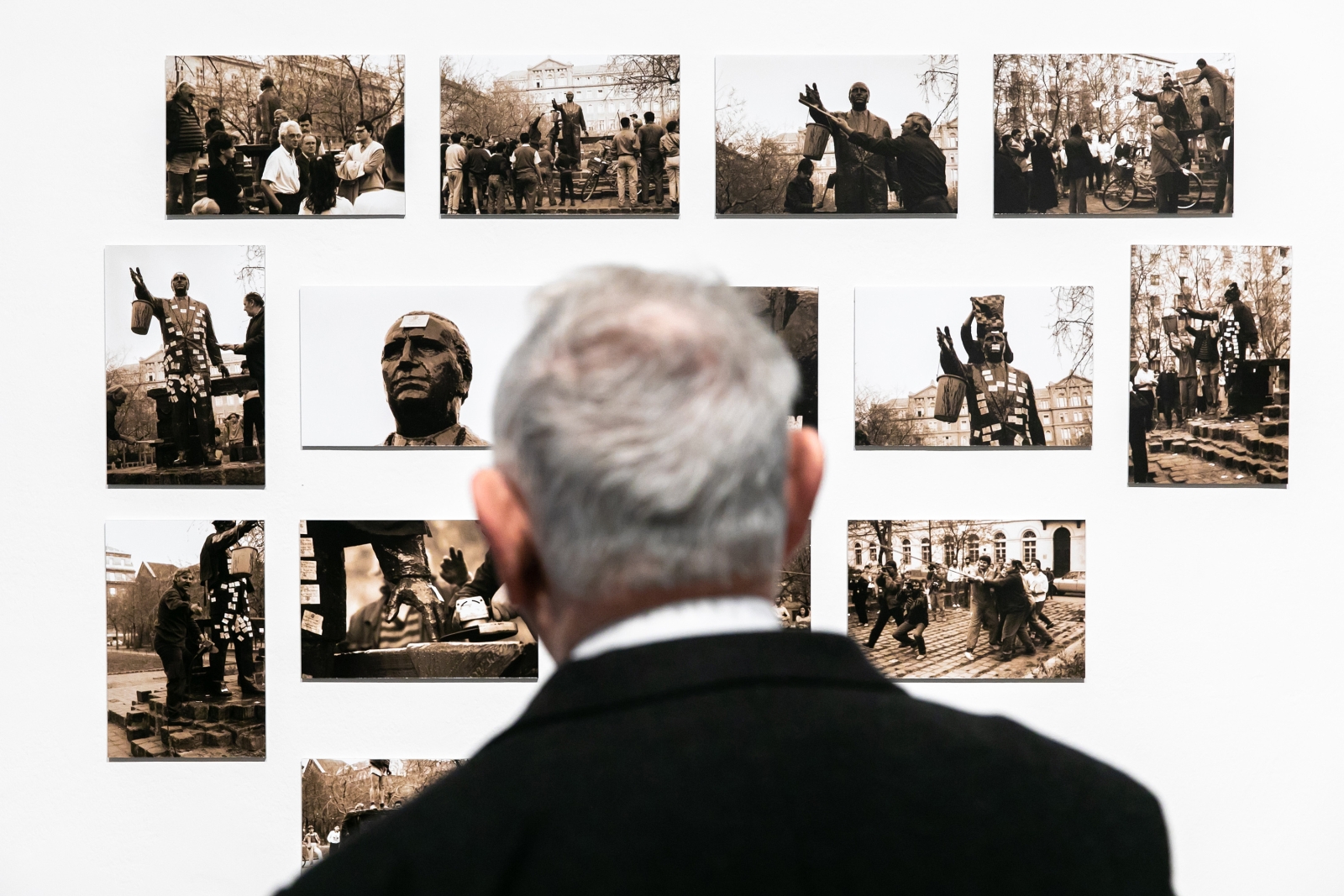 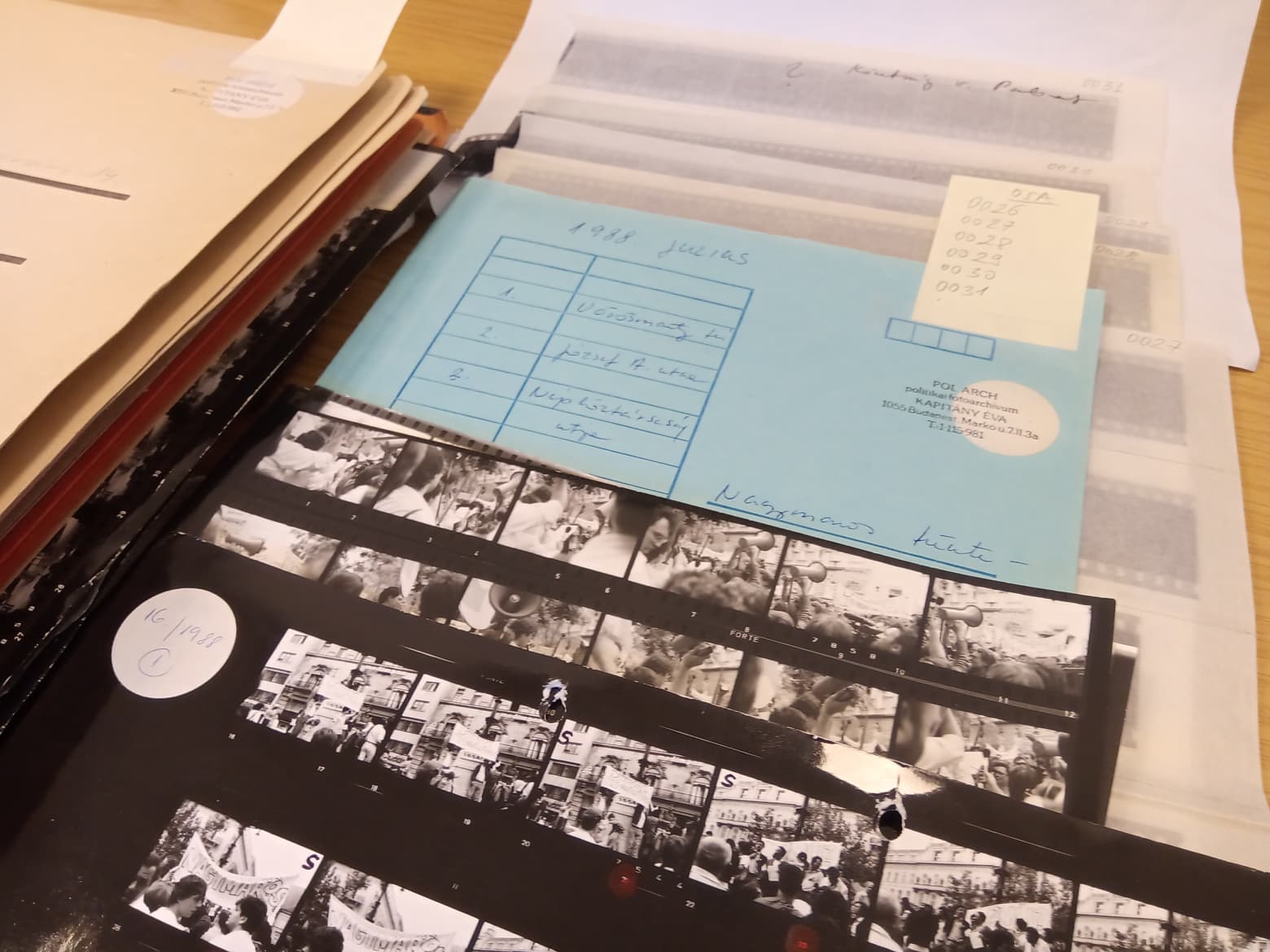 Éva Kapitány's photo series at the Capa Center's EUPHORIA? exhibition, and the processing of her collection at the OSA.
(Photo: Capa Center; OSA/Zsuzsa Zádori)

Éva Kapitány's photo series, on view at the exhibition, captures an episode from the historical process of the regime change; demanding the dismantling of Socialist public monuments, members of the Hungarian October Party, lead by György Krassó, topple the Ferenc Münnich sculpture at today's Honvéd Square, in 1990. Éva Kapitány has been working together with the OSA staff since 2019, to digitize her collection of more than 30,000 photos, making it fully available for research. Named POLARCH Political Photo Archive, Kapitány established her collection in 1987, to assemble the documentary pictures she was taking during the course of the regime change. As a member of the democratic opposition, she attended events the official press did not publish photos about, or with manipulated, distorted content at best. Her aim was, on the one hand, to document these events as they were, and on the other, to channel these images to people isolated from credible information. The result of this activity is an extensive documentation primarily of the public events of the regime change, with their well-known and, owing to Kapitány's personal point of view, the lesser-known participants as well.

The collection, consisting of approximately 1000 rolls, i.e. 36,000 images, is currently being digitized and catalogized with the help of the author, providing detailed descriptions. The processed photos will be available on the Will There Be a 1989? website, run by OSA. 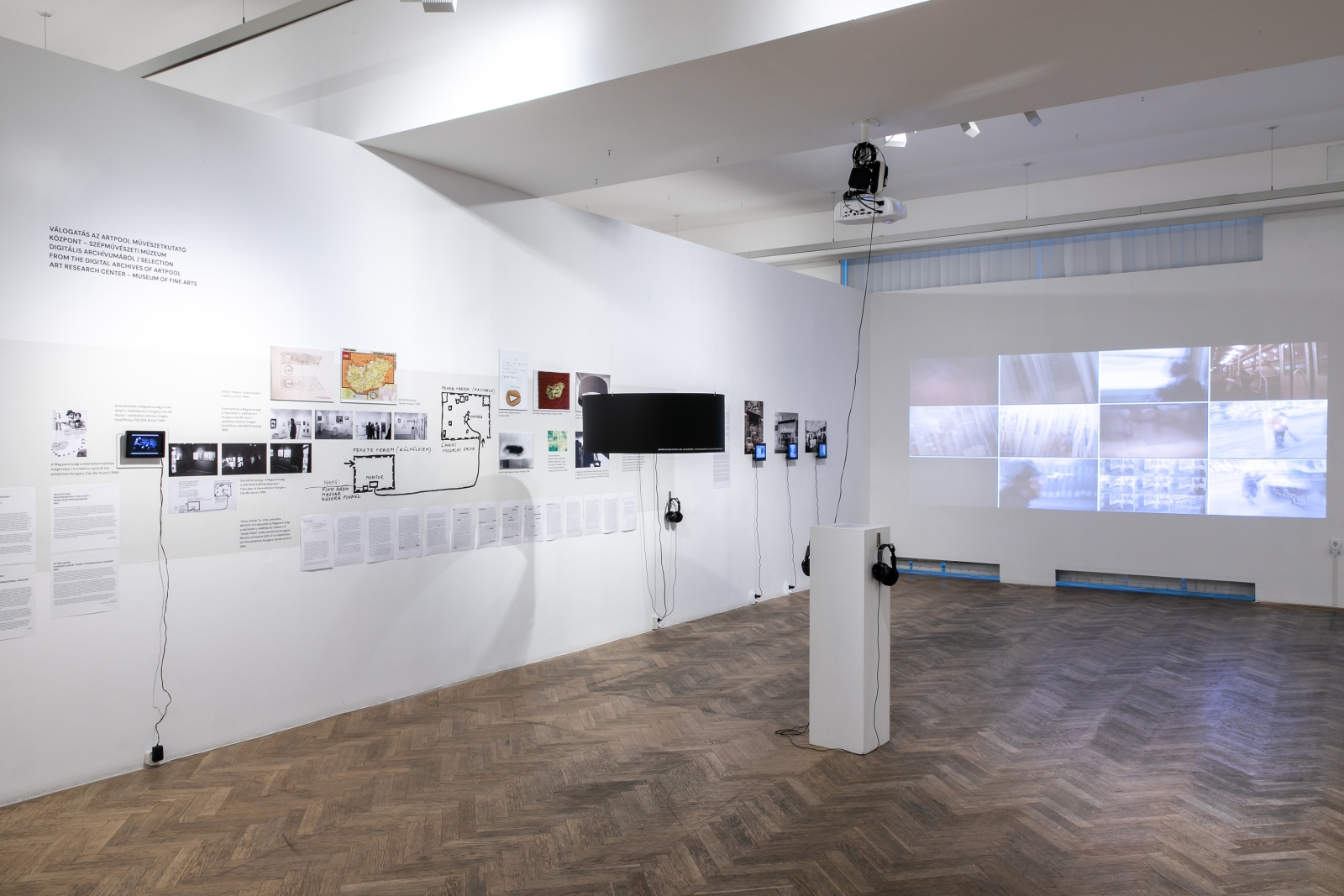 Video Montage made from shots by Rodolf Hervé, on view at the Capa Center's EUPHORIA? exhibition, and on the OSA YouTube channel.
(Photo: Capa Center)

Rodolf Hervé, a French photographer of Hungarian origins, moved to Budapest in 1989, and, eventually, produced a unique video and photo documentation of the period. In 2012, OSA presented his oeuvre in the exhibition On the Ground 1989-94. In his opening remarks to that exhibition, historian Gábor Klaniczay said, "He captured the moment—not exactly in a documentary style, but in an artistic and personal manner—when the underground scene of the 1970s and 1980s Budapest ended. Ended, or rather transformed into a different life form." Also apparent on the video montage on view at the Capa Center, Hervé's attention span from the figures of the democratic opposition close to him, to the characters of the artistic scene or the night life, and to everyday people resting in thermal baths or travelling on night buses. Thus, altough from a personal point of view, he recorded multiple layers of the transitory period; with the political processes and public events of the regime change, with the secondary public rising above the ground and becoming visible, and with bathers doing gymnastics next to the pool.

On the Hervé family's request, 55 DVDs of Rodolf Hervé's videos were copied and deposited with the OSA Archivum in 2004. This collection, available for research in digital format, was described by Klaniczay as "an inventory demonstrating a private historian and artistic approach in which art truly infiltrates life. In which private, public, and semi-public scenes together compose an extraordinary, twisting aesthetic landscape." 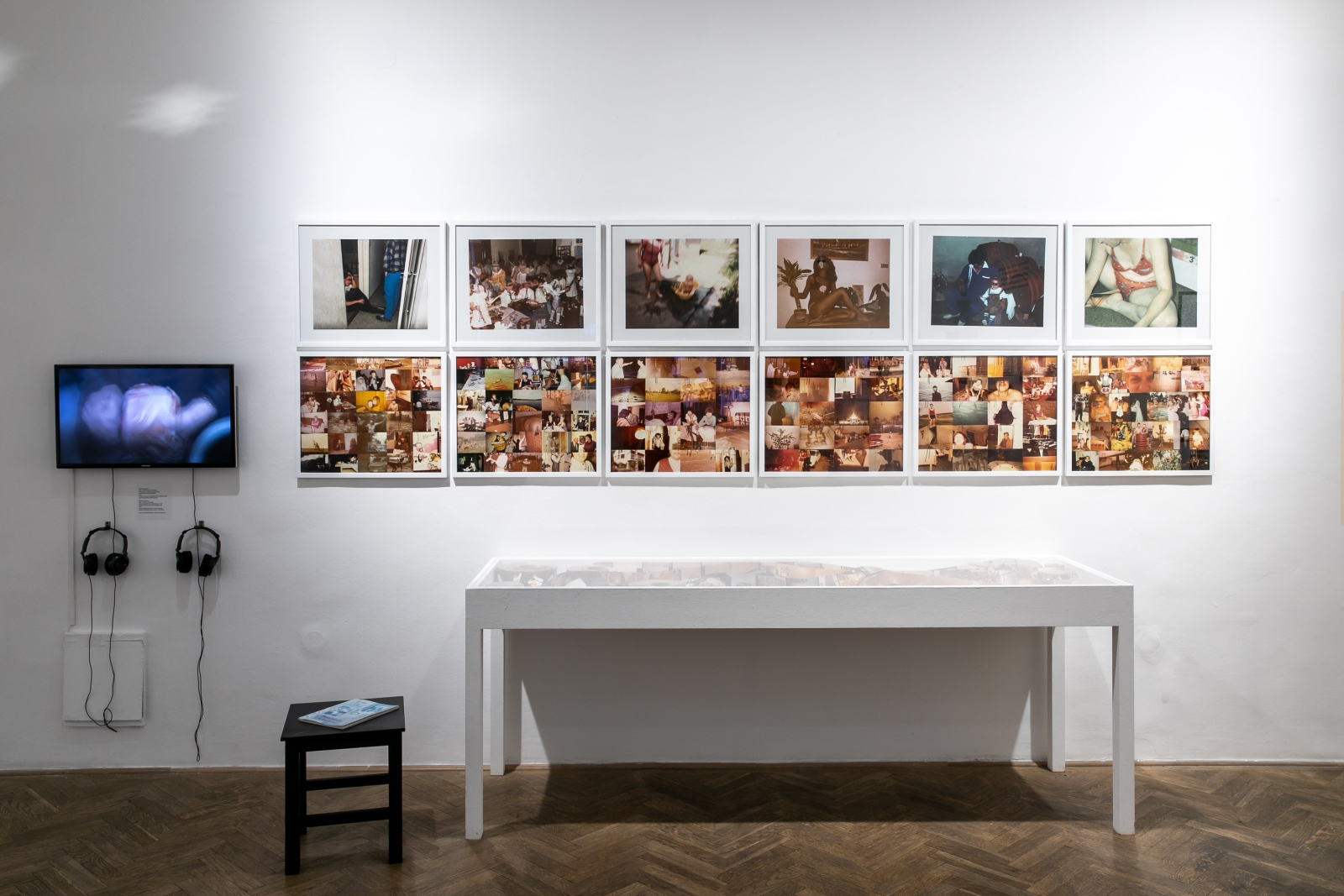 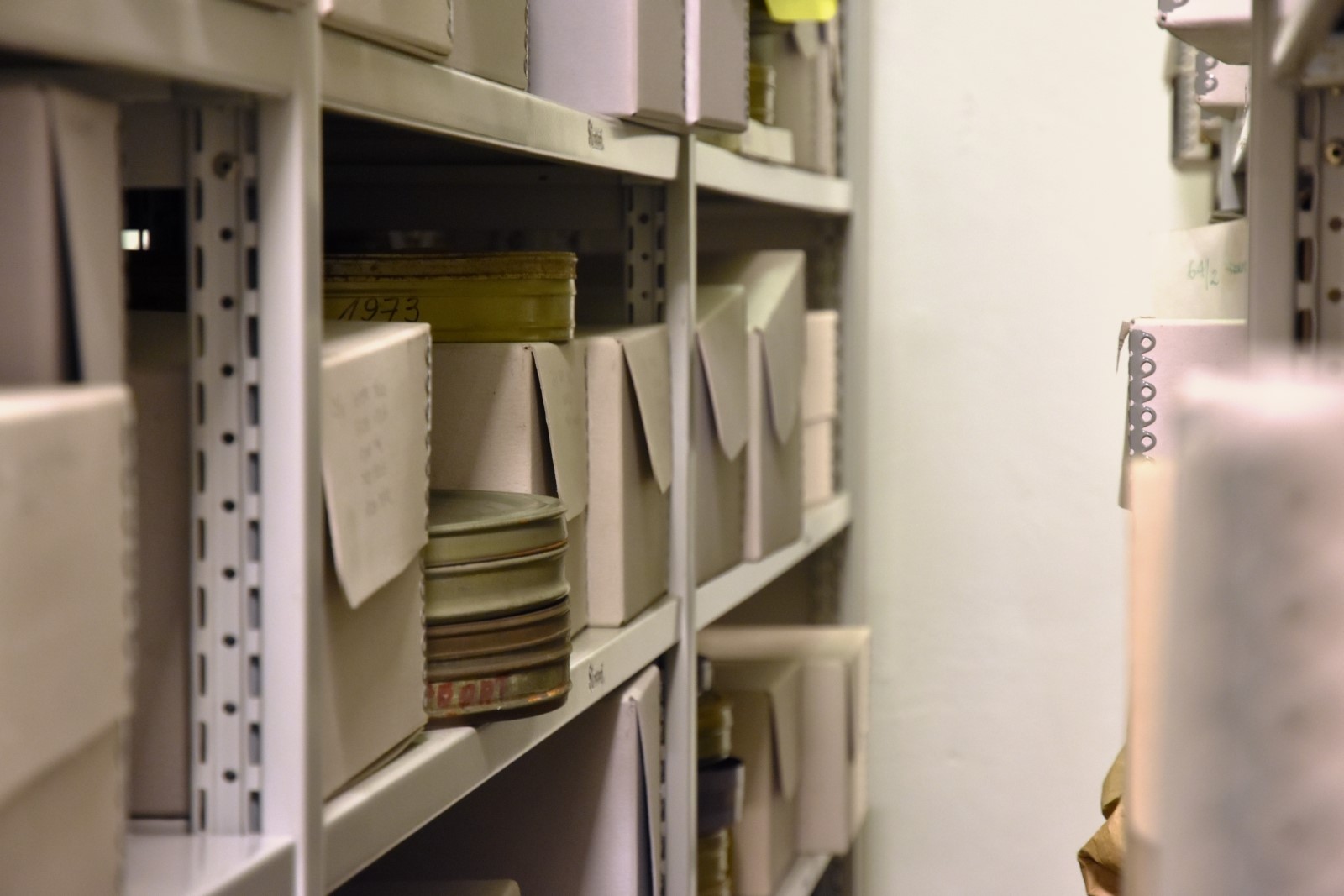 "This is the bottom line of the collection—what was life like?," declares Péter Forgács on a video interview shot for the Capa Center, introducing his amateur photo collection. As a kind of movie archeology project, Forgács has started assembling home movies and photos in 1982-1983, in order to uncover an imprint of the past free of the manipulated and constantly rewritten dominant narratives. The makers of these amateur videos and photographs were, Péter Balassa wrote in his 1992 essay, "attempting, unintentionally, to halt private time, to capture the momentary yet truly significant, owing to a technical invention, and thus the everyday, enigmatic, and hidden private history rises above the 'grand narratives,' constructions, and self-deceptions of the writers and distorters of History." The photos on view at the Capa Center, installed also in an exhibition case, were collected by Forgács from the Hungarian state-owned company FŐFOTÓ's defective product storage; consequently, these images were never seen by their authors, since the professionals at FŐFOTÓ refused to hand them over either for technical or for ideological reasons. As explained by Forgács on the video interview on view at the exhibition, under- or overexposured or out-of focus photos and darkroom failures served ground for technical reasons, and sexuality, gender, or politics for ideological reasons. Nonetheless, the pictures, taken between 1983 and 1989, capture the basic "rituals" of the period, with uncut film strips often preserving even the original dramaturgy of these events; family Christmases and vacations, school celebrations and military years, pig slaughters and funerals. "These also happened in '89," concludes Forgács the video interview.

The collection of Péter Forgács, or Private Photo and Film Foundation, consist of two major units. The Hungarian Home Movies collection, comprising 500 hours of home videos shot between 1928 and 1985, completed by the 200 hours of oral history interviews Forgács conducted, and the art documentaries he created using the raw materials of the collection; and the Amateur Photographs collection, comprising more than 250,000 images taken between the early 20th century and 1989, with numerous uncut film strips from FŐFOTÓ.

Also stressed in its curatorial concept, the Capa Center's exhibition EUPHORIA? "emphasizes the importance of simultaneous versions of a given era and the relevance of individual narratives," instead of an exclusive, grand historical narrative. However, at least because of its physical limits and for the sake of understandability, an exhibition always has to make a selection, and thus has to have its criteria of a sort. With similar intentions to the EUPHORIA? exhibition, the OSA launched the website Will There Be a 1989?, which assembles documents on 1989 in a daily arrangement, pursuing completeness. According to the project's introductory text, "the story/ies of 1989 can be grasped only by the broadest possible accessibility of archival documents, and by the personal recollections, chronicles, and memorabilia of witnesses. . . . Therefore, we encourage everyone to try to understand, reassemble, and process the processes of 1989 with the help of the unique diversity of documents available on this website. Tinker with them, use them as building blocks, draw conclusions. Nobody will do this work for us."