Alternative History Through the Private Photo and Film Foundation 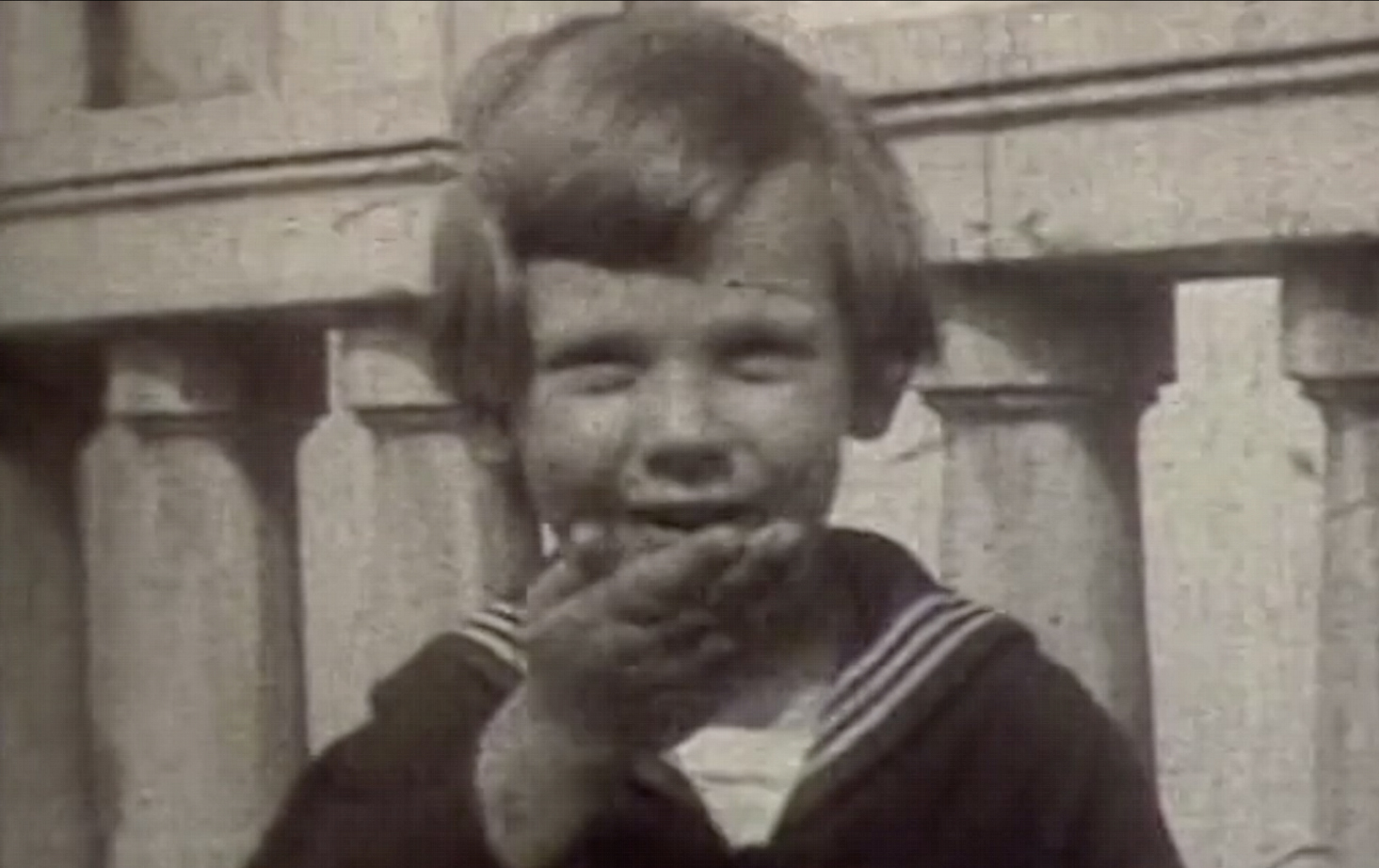 The first clumsy steps of a child, blowing candles off a birthday cake, a family holiday at the lake Balaton, or cruising along the Italian coast. These are just some of the usual snippets from the Private Photo and Film Foundation’s rich collection of home movies from the last century. As early as the 1920s, amateur cameras appeared in Hungary and became prevalent ways of recording everyday, private realities of primarily middle- and upper-middle-class families. Besides the intimate moments, the filmmakers also offered their own viewpoints of public and historical events while reflecting the aesthetic and ideological standards of their times. By now, we got accustomed to seeing such private footage exhibited either in their original format or reworked across various visual media. However, this was not always the case. Although most pre-war records were destroyed or disappeared, there was no attempt to rescue the remaining amateur film heritage after World War II. The reason behind this neglect was not only a general disregard for these films as relevant historical records; they depicted a lifestyle that was publicly eliminated in a Socialist state.

Forrás. [Source., or Boiling point] is a blog series by the Blinken OSA staff at the Hungarian news website 444.hu. Lucia Szemetová is a former Assistant Archivist and Visegrad Fellow at Blinken OSA working on and researching the Photographs and Home Movie Collection of PFFA. Her post originally appeared on osaarchivum.444.hu in Hungarian. 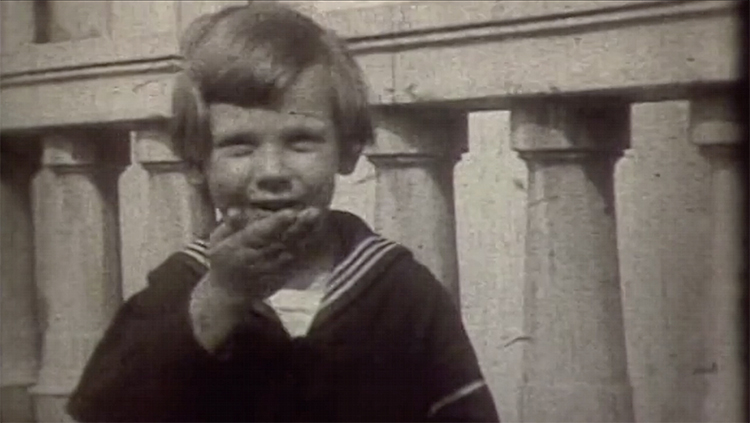 But how do family celebrations, vacations, or children growing up in front of the camera become a form of counterculture? The answer lies in the footage’s content that started to be firmly renounced in the Rákosi regime, continuing to the Kádár era. These films were made by the class enemy, the bourgeoise capturing their affluent way of life and environment deemed undesirable according to the politics of the one-party Socialist republic. Significantly, records of private individuals, opposing a community perspective, became threatening for a state advocating for collective identities. Together with the divide between public and private life upheld during the Kádár period, home movies, associated with a purposefully secluded sphere, were devalued and considered as products of a non-significant leisure-time activity for decades. Meanwhile, these films—containing mediated memories about events and individual lives that have been almost removed entirely from the Hungarian collective consciousness—were hidden away, gathering dust in the attics of many homes.

Despite such general disregard for (private) records of the past, in 1982, the Privát Fotó és Film Kutatócsoport (Private photo and film research group, later foundation, PFFA), was established within a state institution, the Művelődéskutatási Intézet (Research institute for culture, MÜKI), under the directorship of Iván Vitányi. This project grew out of a collaboration between András Bán and Péter Forgács with an endeavour to systematically collect both private photographs and films. They aimed to create a place that preserves, processes, and exhibits private memories while establishing a research center supporting visual culture research and education. They were inspired by Sándor Kardos’ private photo collection, the Horus Archive, founded in the 1970s, and Gábor Bódy and Péter Tímár’s experimental documentary film Private History (1978). From the outset, they were not concerned with the aesthetic binary of amateur and professional art but with the visual characteristics of private images and the very act of self-documenting, the use of images to show one’s intimate surroundings. Thus, through these visual accounts, they aimed to uphold the private sphere, and assert it as a valuable resource for interdisciplinary research and a crucial matter of national heritage.

Advert for PFFA’s private photo and film collection process, highlighting that “family photos and movies display an outstanding value for national self-awareness, and are part of the national tradition. . . . We should not let the valuable memories of old times, the photos, albums, and filmstrips, as well as the descriptions and stories associated with them, get lost!”
(HU OSA 320 Photographs and Home Movie Collection of PFFA)

Around 500 hours of videos shot on 8mm and over 250,000 family photographs from before World War I until about 1988 were archived during the research process. Bán and Forgács managed to get public funds for their research and also for running adverts in newspapers in order to build a collection at their institute. With a substantial part of amateur photography and film history already lost, PFFA prioritized pre-war family albums and pre-1960 home movies, as these were the most sensitive and rare records. Thanks to their collaboration with the Fővárosi Fotó Vállalat (Capital photo company, Főfotó), they also collected contemporary mass photographs as a way to analyse the Socialist value system.

Beyond preservation, the researchers at the PFFA conducted oral history interviews with private filmmakers and their relatives to acquire contextual details of rich family histories and their relationship toward recording. Although they centralized visual materials, other donations such as family genealogies, film diaries, and memorabilia related to the filmmaking memories were encouraged. Their chosen field of visual anthropology led them to appreciate the ethnographic knowledge imparted by the amateur media, and generated numerous academic studies in the field. They collaborated with renowned scholars, published their research, and forged international connections to revive cultural history studies in Hungary, and bring visual media to the fore.

Amateur film questionnaire asking, “Since when have you been filming your family? What do you intend to express with your films?”
(HU OSA 320 Photographs and Home Movie Collection of PFFA)

Bán and Forgács early on recognised the importance of getting to know the everyday culture, otherwise inaccessible if not for these visual traces, and its ability to challenge the boundaries of taboos during Socialism. For them, private meant a clear opposition to the public, and thus to official historical narratives; a viewpoint that overall impacted their archiving process focusing on personal narratives. It was a response to the forced modernization of the Kádár era; to raise the standard of everyday history awareness and gather knowledge for processing both the past and present. Through restoring these private records, the archive re-evaluated citizen comrades to private individuals, and resurrected the Hungarian bourgeoise. The interviews especially addressed the amateur creators’ lived experiences while encouraging them to reflect on their creative practice. Acknowledging the photographer and filmmaker as an organiser of history and as a home anthropologist reasserted their agency in a time when individuality was repressed. Thus, their work marked not only the start of alternative historiography, but also introduced new ways of appreciation, use, and contemplation over amateur media heritage. This archive set the standard also internationally, as private films assumed archival interest and value only later in the 1990s. 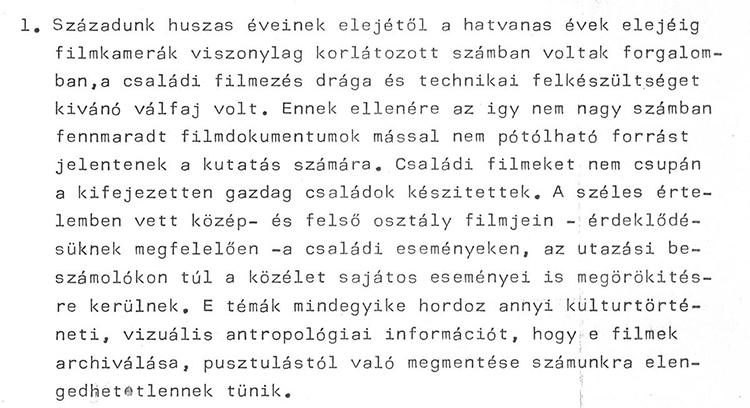 Application by András Bán and Péter Forgács for a HAS–Soros Foundation Committee scholarship, 1985; “Beyond family gatherings and travels, the films by the middle and upper class also capture peculiar public events. Such themes all carry information for cultural history and visual anthropology, making the preservation or rescue of these films essential.”
(HU OSA 320 Photographs and Home Movie Collection of PFFA)

After the regime change, MÜKI gradually ceased operations and faced the dispersal of all its institutional records, research, and publications. This meant the end for academic research and publications within PFFA, but not for its other activities. The archive became a separate foundation primarily collecting home movies and interviewing their makers or relatives. Besides, during this period the home movies became also popularized by Forgács’ critically acclaimed Private Hungary series that recycles footage to address previously unresolved traumas of the past century:

After the final collapse of the hosting institution, the PFFA holdings got relocated to Blinken OSA in the late 1990s. Although since then the collection of further private materials stagnates, the archival processing and artistic reworking of the diverse holdings does not. Today the private reels, as well as the accompanying audio interviews and their transcripts, are digitized and available to the public in the Blinken OSA Research Room alongside Forgács’s numerous artistic documentaries reworking these materials.

The fact that we can encounter Hungarian private media produced between 1925–1985, let alone study it, is owing to the immense work done by the PFFA. This foundation opened the horizons of amateur and visual media research while investigating the convergence between official and private history recordings. Through a close engagement with this unique collection, we can understand how the use-value of private films brings out the tensions between private and public, relevant and irrelevant, worthy and unworthy records, and ultimately shapes and structures the mediation of the past.