A Massacre under Khrushchev: Novocherkassk Shooting on Screen, on Air, and on Banners 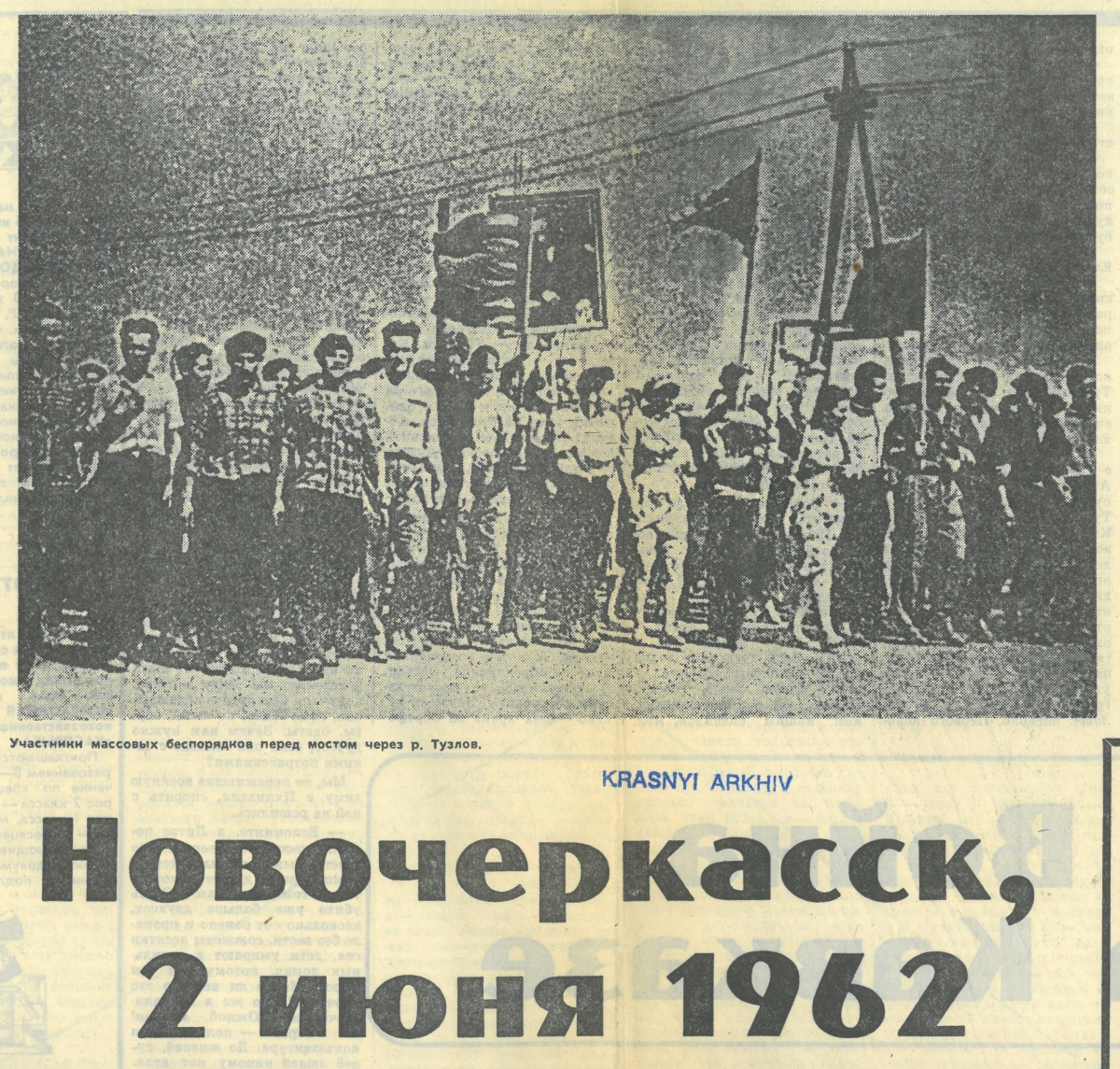 In September 2021, the latest movie by highly acclaimed Russian director Andrey Konchalovsky, Dear Comrades! premiered in Hungary. The film depicts the heart-rending story of the 1962 Novocherkassk shooting. Public knowledge on the mass protest and its brutal dispersion was suppressed in the USSR before the regime change; in Russia today, it is facing the risk of quieting again. Through sources preserved at the Blinken Open Society Archives at CEU, we recount the aftermath of the events; a tangled and cautionary tale of information spread and its blocking, of forgetting, accountability, and remembrance. First we revisit the reports produced in the West in hot pursuit of the riot; then we explore how Soviet dissidents acquired and later demanded information on what had happened; lastly, we reconstruct how public discussion on the subject emerged in the 1980s, to be silenced once again in the 2010s.

Forrás. [Source., or Boiling point] is a blog series by the Blinken OSA staff at the Hungarian news website 444.hu. Anastasia Felcher is Archivist and Slavic Specialist at Blinken OSA. Her post originally appeared on osaarchivum.444.hu in Hungarian. Special thanks to Adrian Matus and Oksana Sarkisova! 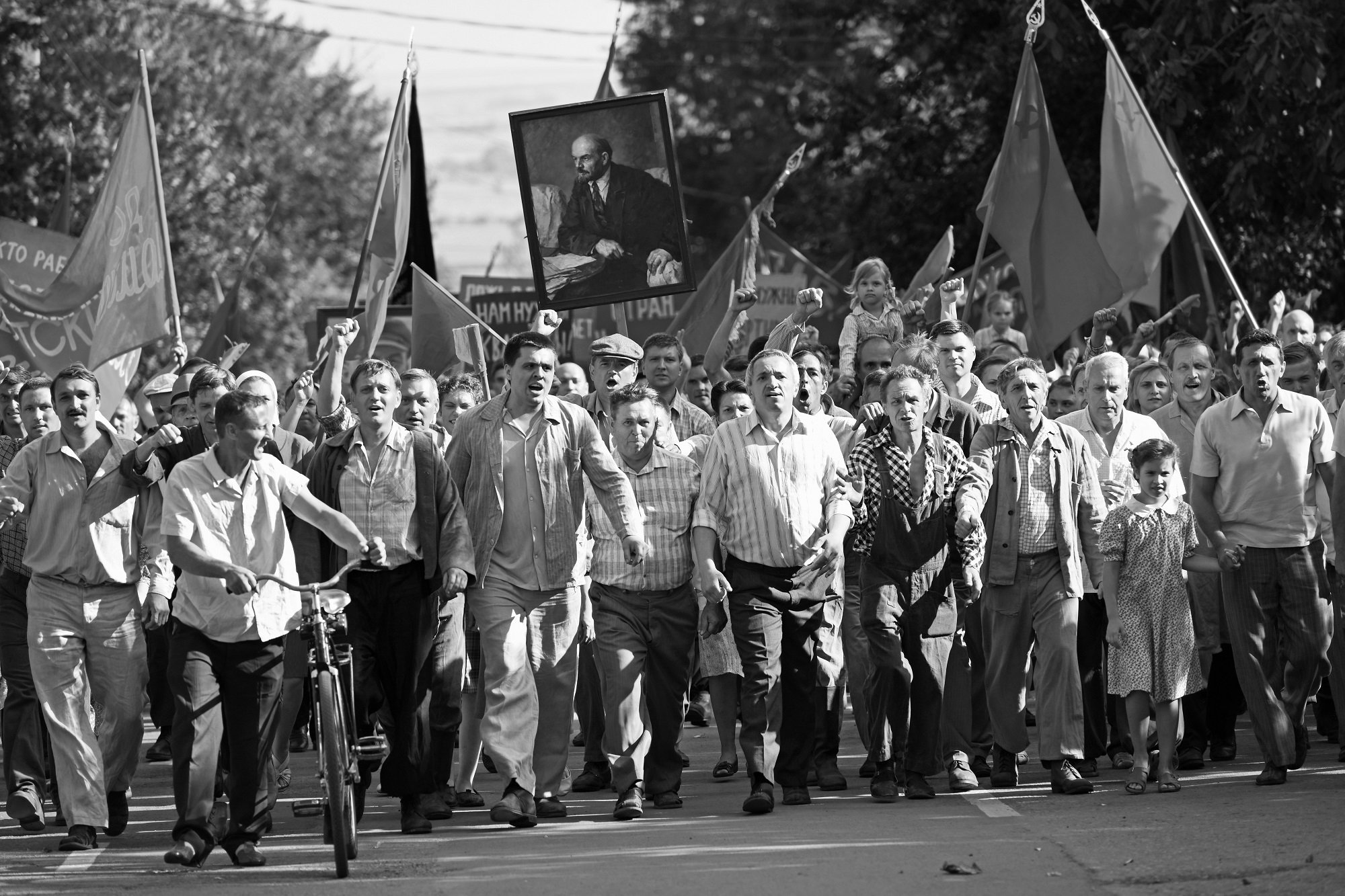 The workers’ riot of early June 1962 in Novocherkassk, a town 20 miles northeast of the industrial city of Rostov-on-Don in southern Russia, took place in response to a nationwide increase in dairy and meat prices, and the parallel increase of production quotas applied to individual factory workers, which meant significant income reduction. On June 1, workers of the Novocherkassk Electric Locomotive Plant (NEVZ) started a labor strike and blocked the railway. During the night, Soviet troops entered the city. On June 2, the strike continued, protesters marched through the town, and gathered in front of the city council. The army, led by the KGB, fired into the unarmed protesters, killing 26 people and injuring 87. Traces of the shooting were immediately covered up, the corpses moved and buried in unknown graves. A curfew was imposed, and a series of trials followed. Seven people were sentenced to death as instigators of the riot, and 105 were sentenced to prison terms, while information about the event was classified and rumors silenced. 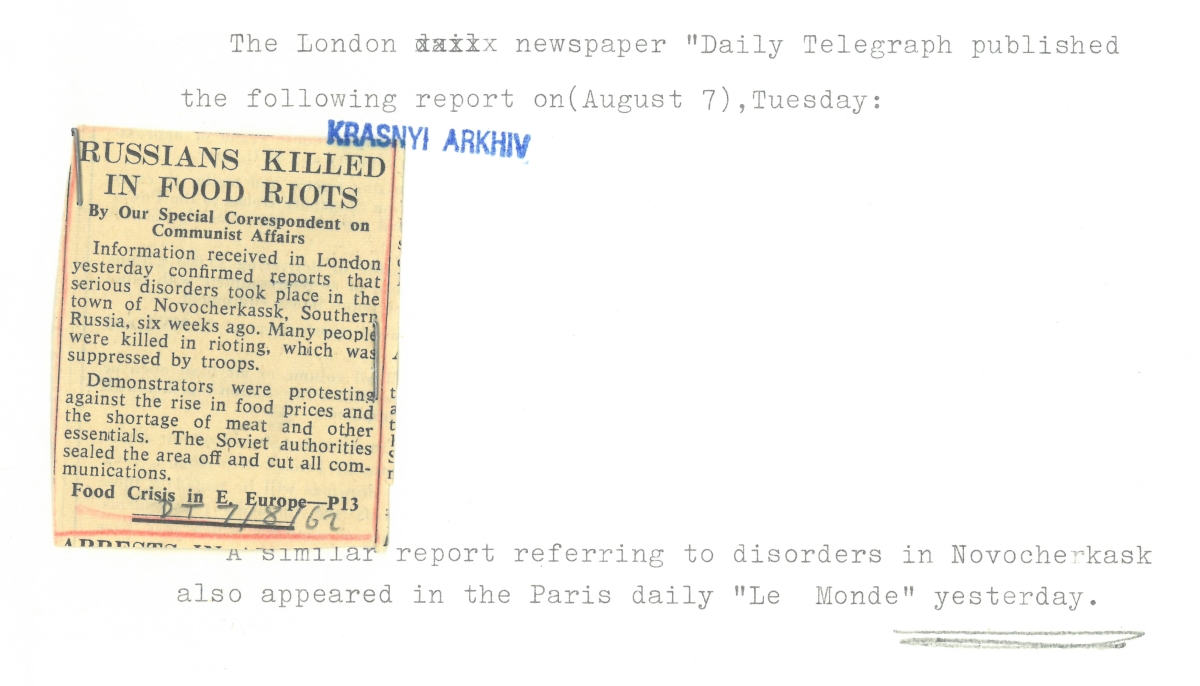 As apparent in the Subject File compiled by the Radio Free Europe/Radio Liberty Research Institute, numerous Western newspapers reported on the Novocherkassk events: Paris-Presse (July 25, 1962), Daily Telegraph (August 7, 1962), Le Monde (August 8, 1962). Some indicated hundreds being killed, while others reported on no confirmation of casualties, emphasizing that fellow journalists publishing unconfirmed, unverified reports or even rumors, acted irresponsibly. The New York Herald Tribune (August 8, 1962) cited a Western official stating, “something might have taken place, but no one really knows. These stories have a way of building up as time and distance increase.”

It was not before September 1962, that detailed reports appeared. As Soviet authorities restricted access to Rostov region, these reports were based on a variety of secondary sources. Reporters of RFE/RL carefully evaluated the information that reached the West, spoke with the Soviet delegates at the World Youth Festival in Helsinki, reviewed the Soviet press, and observed the personnel changes in the Rostov party obkom (regional committee). By early September 1962, RFE/RL reconstructed the series of events following the June 1 announcement of retail price increase, and in a radio report, broadcast in seventeen languages throughout the USSR, confirmed that the bloodshed indeed had taken place. 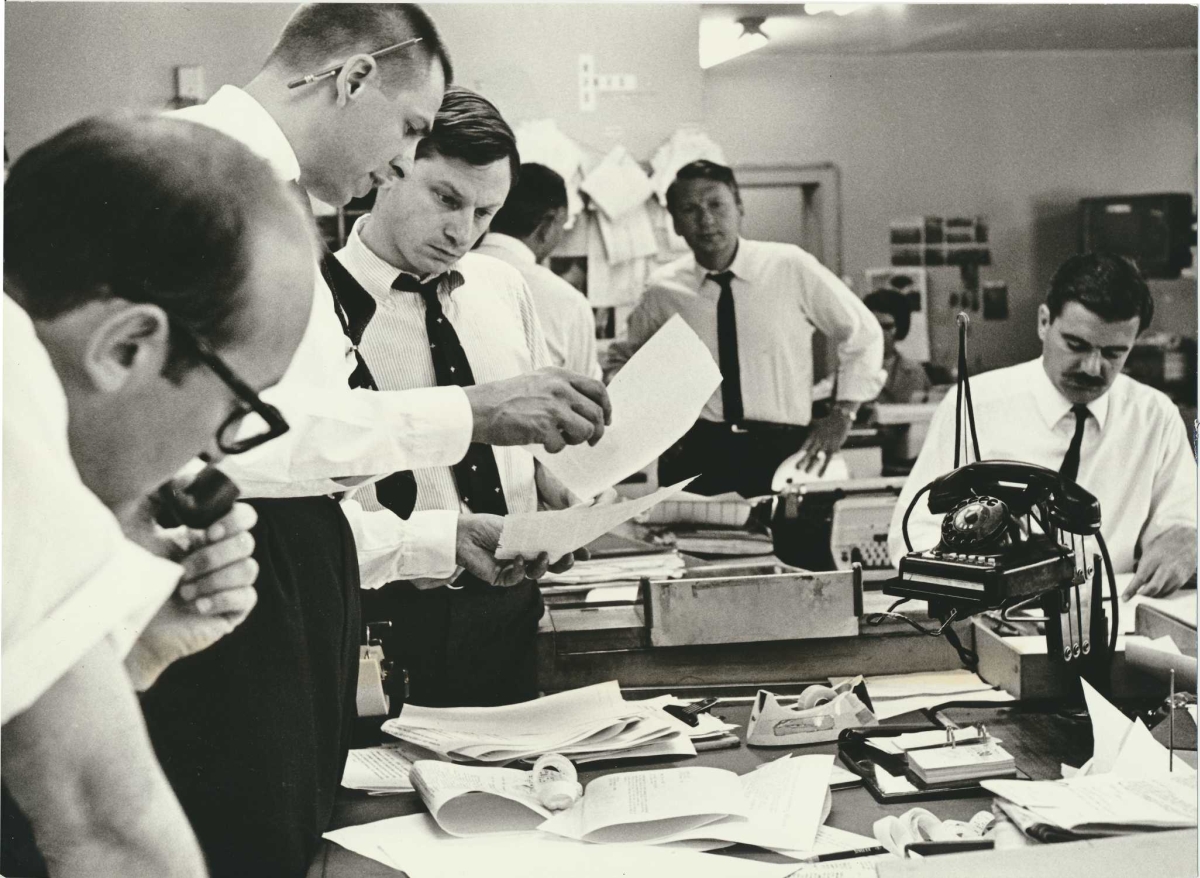 The report also noted that “by suppressing news of the disturbance in Novocherkassk and the Rostov area, Soviet media are suppressing the right of the people in the Soviet Union to be fully and accurately informed of developments in their own country.” Evident from the internal communication between its overseas offices, it was the information on the shooting that was the most sensitive, but the exact number of casualties remained unknown. In the subsequent months and years, lengthy articles followed in the West, interpreting the events in Novocherkassk (and in surrounding areas) as an indication that the continuing shortage caused by Khrushchev’s food policy might lead to new outbreaks of local violence.

In late 1973, the first edition of a three-volume nonfiction work by Soviet dissident Aleksandr Solzhenitsyn, The Gulag Archipelago, was published by the French publishing house Éditions du Seuil. Combining personal memories as a prisoner of the Soviet forced labor camp system with fragmentary evidence from various, scattered sources (including interviews, reports, and documents), Solzhenitsyn portrayed a painfully daunting narrative of a repressive state and its methods to deal with dissent. In the chapter “The Law Today,” Solzhenitsyn turned to Novocherkassk, “a town of fateful significance in Russia's history,” and, in a narrative of revolutionary outbreaks that brought Bolsheviks to power, interpreted the 1962 riot “a turning point in the modern history of Russia. . . . the first time the people had spoken out in forty-one years.” Solzhenitsyn highlighted that the regime concealed every evidence on the shooting so well, Soviet citizens together with the rest of the world were completely in the dark about what had happened. According to the author, “no one abroad got to know about Novocherkassk, there were no Western broadcasts to inform us of it, and even local rumor was stamped out before it could spread.” Whether Solzhenitsyn deliberately ignored the detailed accounts by the Western press, or had no chance to know about them, remains unknown. 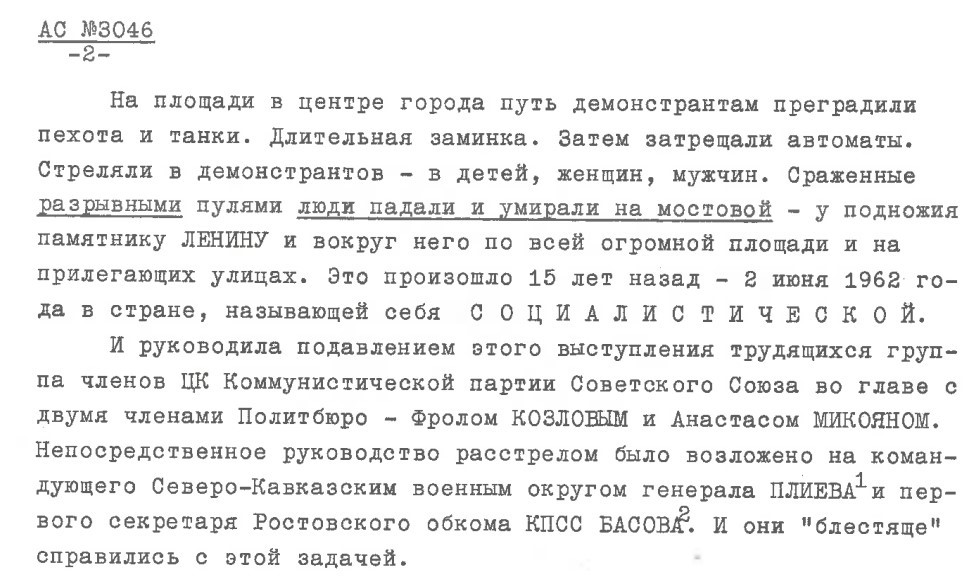 The 1977 appeal as published in Materialy Samizdata, offering an emotional account of the events. The signatories highlighted the utmost cruelty of the army: “then the machine guns crackled. They shot at demonstrators; children, women, men. People struck by explosive bullets were falling and dying on the pavement; at the foot of the Lenin monument, on the huge central square, and on the neighboring streets.”
(HU OSA 300-85-9 Records of RFE/RL, Samizdat Archives)

Following its publication in Paris, the Gulag Archipelago circulated in samizdat in the Soviet Union. Soviet dissidents got informed about the Novocherkassk events from Solzhenitsyn’s work. Signing an appeal in 1977, 15 years after the shooting, 22 Soviet dissidents (including Andrei Sakharov, Yelena Bonner, Tomas Venclova, Naum Meiman, and others) suggested to mark June 2 as a day commemorating the Novocherkassk events, as a memorial day of struggling against the bloody terror of the authorities. The appeal was published in two major bulletins, both of which were initiated by the Research Department of Radio Liberty: Sobranie Dokumentov Samizdata (Collection of samizdat documents) and Materialy Samizdata (Materials of samizdat). These bulletins reproduced samizdat documents to make them available to the broader public (as well as to the radios). The appeal presents an emotional account of the riot, and the brutalities and silencing by the authorities, calling the responsible executors by name. The signatories praised the “persistent and courageous work by Alexander Solzhenitsyn” of gathering and spreading information about the shooting, again, omitting the Western press reports and publications from the 1960s. They speculated about the exact number and names of the victims, and about their burial places. Thus, despite making the story of the massacre public (for the selected readers of samizdat), it still required further effort to reveal the details persistently kept as a state secret.

It was only during the late 1980s, with the policies of glasnost and perestroika, that the details about the shooting, including the names of some victims, photographic evidence, and concealed burial sites, became publicly known. The matter was broadly discussed in mass media, with all-union newspapers publishing lengthy accounts on the participants of the events and the cases of the arrested, and specifying the number of victims.

The first photos of the demonstration became public in 1991. The images published by Komsomolskaya Pravda are photocopies of (a smaller part of) the originals taken by the KGB, which had been used to identify and arrest protesters. After the journalist founding member of the Novocherkassk Committee for Investigating the Events of 1962 made the copies in 1990, the originals mysteriously diseppeared during a government office move.
(HU OSA 300-80-1 Records of RFE/RL, Soviet Red Archives)

With the collapse of the USSR, new political parties emerged on Russia’s political horizon, and some of them appropriated the memory of the Novocherkassk shooting as part of the new Leftist or Democratic agenda. In 1990, for instance, a newly created Marxist Workers’ Party – The Party of the Dictatorship of the Proletariat (MPR–PDP) called for an all-union rally in Magnitogorsk dedicated to the memory of the victims of the Novocherkassk tragedy, as a framework for reaching out to potential electorate. As the party called for “peaceful transfer of power into the hands of the working people,” its leaders claimed that the party will “continue what the Novocherkassk workers started.” The following year, the Novocherkassk branch of the Democratic Russia Movement, the most influential democratic organization in post-Soviet Russia, called for a commemorative rally, and invited the participants of the historical protest and the highest authorities as well. At the rally, the founding stone for a future memorial was laid at the city cemetery. In 1994, an official investigation followed. During the 1990s and the 2000s, the Novocherkassk shooting, commonly referred to as a massacre or tragedy, was publicly discussed and commemorated, including by both Russian presidents, Boris Yeltsin and Vladimir Putin.

Today, multiple sources shed light on the tangled story of the 1962 Novocherkassk riot and shooting, including visual, audio, and textual, either from state or counter-archives. In the 2010s, however, with the recent conservative turn in Russia also impacting the politics of history and memory, commemorative activity around the Novocherkassk events became noticeably less frequent. Currently, the Russian government tends to silence the crimes of the Soviet regime, and prefers not to bring “uncomfortable” chapters of the Soviet history to the public fore. Under these circumstances, putting the story of Novocherkassk on screen may even be interpreted as a courageous act of resistance. In Russia, Dear Comrades!, despite its international praise and state-sponsored production, indeed received mixed reception among conservative circles. The movie, however, omits having a clear moral stand on the Soviet state’s responsibility. In 2021, a new controversy followed, when Konchalovsky, who back in 1980 had left the USSR for Hollywood in search for freedom from censorship, expressed his willingness to withdraw the movie from a competition as long as it was nominated for the same film award as the investigation of opposition politician Alexei Navalny and the Anti-Corruption Foundation. One might ask the very same question Novocherkassk dwellers—imprisoned and sent to camps—have been asking for nearly sixty years; paying tribute to the victims, how do we guarantee the proper flow of information on what happened? How do we hold the state accountable? How do we prevent it from shooting its own people?