Ecological Crisis and Political Art in the 1980s Hungary

The members of Inconnu, one of the most prominent dissident artists’ groups of the 1980s, got involved in the emerging Hungarian environmentalist movement in the second half of the decade. This movement was primarily organized around the issue of the Gabčíkovo–Nagymaros Dams that was a joint project of the Czechoslovak and Hungarian states to build a large barrage project on the Danube that would profoundly shape the historical landscape of the river around Visegrád. The Inconnu groups’ focus on environmental issues was deeply related to their critique of the state-socialist regime. Thus, environmental issues could get a prominent role in their agenda because, through this case, they could build upon the popularity of this topic to criticize the regime.

On October 13, 1985, the Inconnu group hosted the event Blues for Danube in their apartment gallery Artéria. The blues in the title was a pun with the word ‘greens’, since the Hungarian environmentalist movement was primarily organized around the Danube-issue, the river, which is often referred to as “blue”. The guests of the event were the members of the Danube Circle, an unofficial NGO that was protesting against the Gabčíkovo–Nagymaros Dams. Even the state security were present at the event and they produced a report on it by highlighting the most important parts of the debate and of the exhibited material.

In relation to this event, László Vit, a member of the Danube Circle published an essay in the fifth issue of the Inconnu’s samizdat magazine, in which he compared the construction of the Gabčíkovo–Nagymaros Dams with the similarly useless, monumental construction of the Egyptian pyramids, which were equally based on exploited labor.

However, the Inconnu members were more directly involved in the environmental movements of the period. In the spring of 1985 they were printing T-shirts with the emblem of the Danube Circle. But the environment was just one of the group’s concerns. This is also shown by the fact that meanwhile they were also printing T-shirts with the logos of the Artéria Gallery, Amnesty International and one against European Cultural Forum of Budapest.

One of the best-known Danube-related work of the Inconnu was the graphic work entitled Greetings from the Danube Bend!, in which a skull drifts down the river around Nagymaros. This image was published on the back page of the 10th anniversary-publication of the group, and later lived its own life by being present in leaflets independent from the Inconnu. 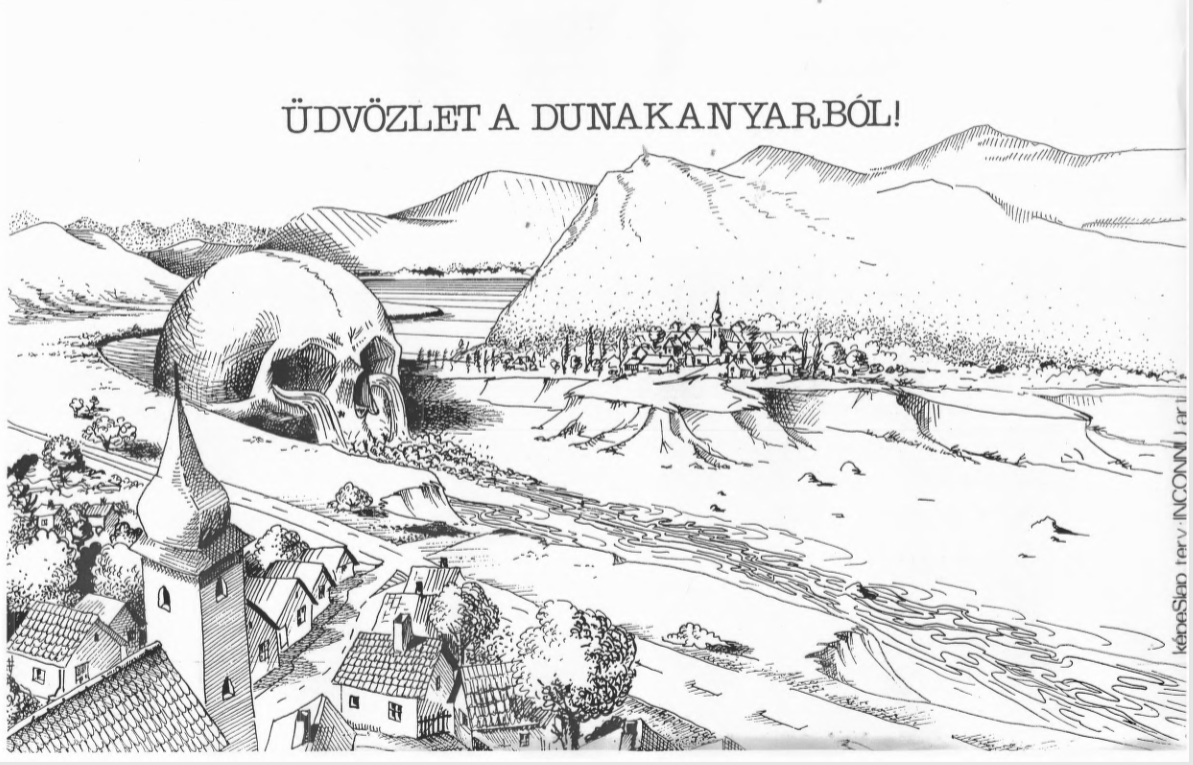 The Inconnu group also made the Danube-Dracula poster that just intensified the skull form. In this image, the teeth of Dracula are extracting natural resources from the Danube, while the merged Austrian and Hungarian flags are referring to the Austrian loan and constructor of the project. 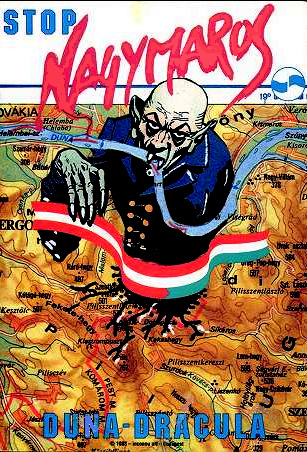 A more everyday evidence of the Inconnu group’s anti-dam activism is a plastic bag with the letterings Inconnu and Nagymaros. This was possibly used to carry posters, leaflets, stickers, or T-shirts related to the anti-dam protests. 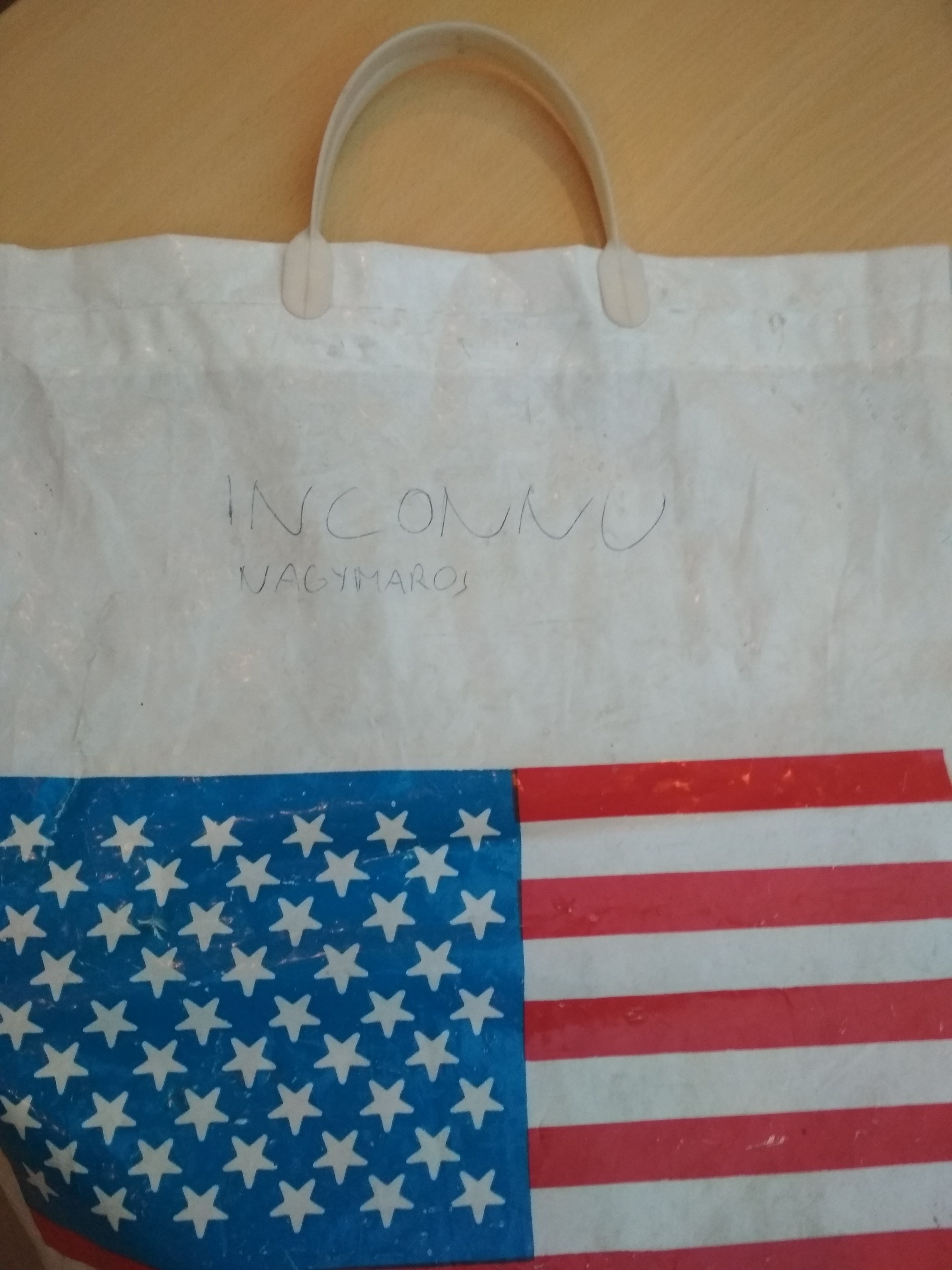 The topic of the environment often appeared in the early work of the Inconnu in the turn of the 1970s and 1980s. The performance In Memoriam Vegetation, which will be on display in the framework of the exhibition Left Turn, Right Turn – Artistic and Political Radicalism under Late Socialism // The Orfeo and the Inconnu Groups shows humankind’s hopeless and resource intensive struggle to reproduce life. In the performance, a man crawls in a red phlegm towards a leaf of bread, which is constantly moving away from him since it is tied to his legs through a pulley.

The happening-plan entitled In Memory of the Artists of the Szolnok Artists’ Colony directly attacked the most common form of the artistic representation of nature, namely the well-known landscape painting tradition of Szolnok. In the happening, an artsy-dressed artists would sit and paint in a garbage container at the high street of Szolnok. 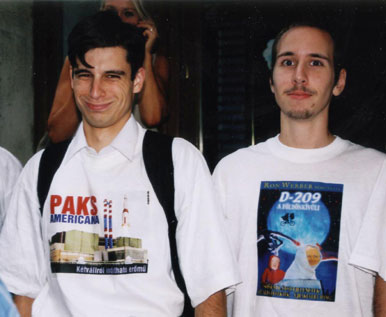 Among the early happening-plans of the Inconnu the Environmental Pollution as Pop Art is the most related to the issue of culture and nature. This planned happening smears pop art that was considered by the Inconnu members as a useless and pointless tendency without any stake. The happening-plan was the following: At the side of a busy road I would choose a lone tree. Together with my mates, I paint it to blue with a sprayer. After the tree dries, I paint my and my mates bodies to red-yellow striped. After this we sit for a long time in the colorful foliage.

Environmental issues and even the technique of printed T-shirts were returning in works of the New Inconnu that from 2002 involved only two of its original members. In this photo we can see a T-shirt with the caption Paks Americana (a wordplay with the Paks Nuclear Power Plant and the Pax Americana): an act of protest against expanding the Paks Nuclear Power Plant with US investment. This message, similarly to the Inconnu’s environmental projects of the 1980s, was just one point in a wider chain of oppositional political messages.