A call for democracy from the Soviet Samizdat Archives

Samizdat, the underground publishing of uncensored materials, became an important part of public life in the Soviet Union in the 1960s. Recognizing the value of such (self-) publications, the Soviet Research Department of Radio Free Europe/Radio Liberty Research Institute started to collect samizdat documents that reached the West. They were a rare first-hand source from behind the Iron Curtain, and the Radio staff actively used them in broadcasts. The expansion of the samizdat archive continued until the collapse of the USSR made such clandestine publishing unnecessary. More than twenty years of work resulted in one of the world’s largest collection of political Soviet samizdat, which is now available to researchers at the Vera and Donald Blinken Open Society Archives (Blinken OSA).

Blinken OSA has described and catalogued 3,000 records from the Samizdat Archives. These documents cover the period between 1966 and 1976, which was the heyday of Soviet samizdat: the time of its widest circulation, broadest thematic coverage and of great hopes for change among its creators. In the mid-1970s, the dissident movement experienced a crisis connected to the repression, imprisonment or exile of the main activists and to the painful realization that all their efforts produced almost no result. Later on, the dissident movement would concentrate on reporting infringements of human rights in the Soviet Union and would produce documents primarily for the Western audience.

Samizdat was a unique forum for the discussion of topics banned from the official Soviet mainstream, be they linked to religion, non-Marxist philosophy, human rights, emigration or corruption. It was a channel for sharing alternative visions of the Soviet past, present and future and for communicating the rare calls for resistance and programs of reforms.

One of the earliest such documents was the Program of the Democratic Movement of the Soviet Union, created in 1969. A Radio Liberty report about the Program calls it “possibly the first document of its kind – a comprehensive political program by an unnamed group of Soviet citizens opposed to the present system of government in the USSR.” Now we assume that the author(s) must have belonged to the group of Sergei Soldatov, who also edited the samizdat journals Demokrat and Luch svobody, both available at Blinken OSA. 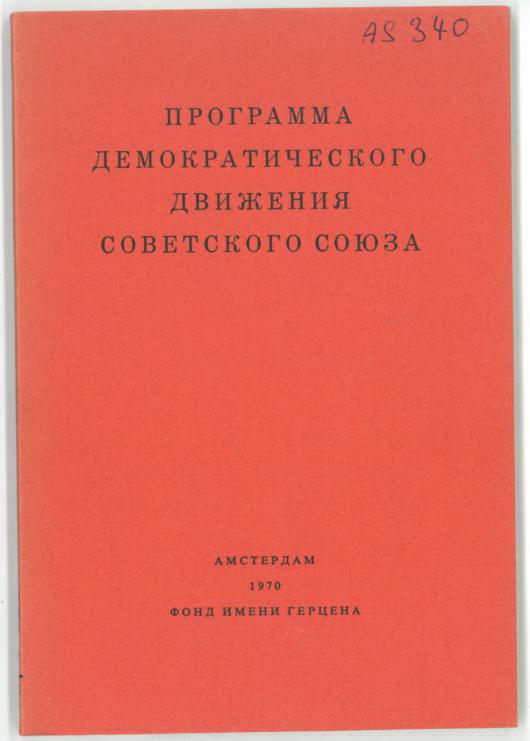 Cover of the Program

The Program was clearly an exceptional item in the Radio’s samizdat collection; indeed, it was so unusual that the Radio grew worried that it would cause conflict among its employees and make them take sides when discussing or broadcasting it. 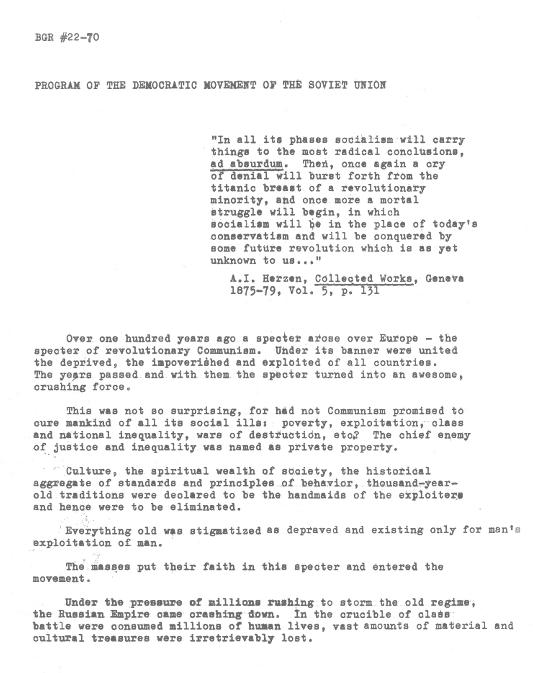 While many Soviet dissidents, especially human rights activists in Moscow, urged the authorities to respect existing Soviet laws, the authors of the Program advocated a transformation of the system without resort to force and its evolution into a society based on different legal principles. At the same time, the Program saw nationalism and the democratic movement as tightly linked – a vision that neither of the two camps was perhaps ready to share. It called for the creation of a Union of Democratic Republics, a multi-party system, democratic elections, private property and non-interference by the state in the spiritual activities of society.

The Program was clearly in dialogue with the Communist Manifesto. It starts with a reference to the specter of Communism, and discusses the change that this “awesome, crushing force” brought to Europe. Looking at the world around them, the authors of the program saw their cause in the new struggle for democracy and ended their own manifesto with an obvious paraphrase:

We, democrats of our country, call on all honest, thinking and bold citizens of our society, of any age, sex, religion, class or national affiliation, to take an active part in the peaceful, non-violent struggle for the high democratic ideals!