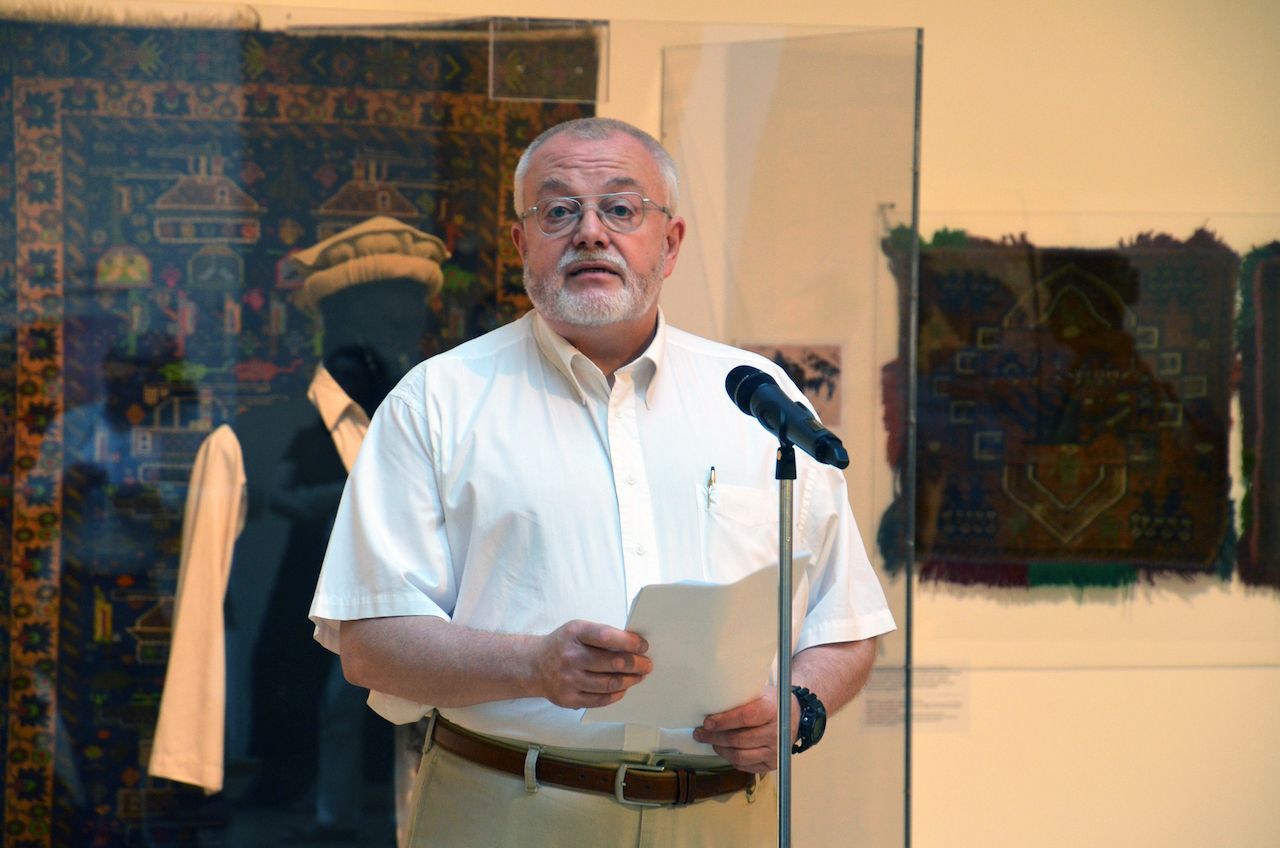 Welcome to the opening of the “Afghanistan, the Graveyard of Empires - the Soviet War” exhibition at the Vera and Donald Blinken Open Society Archives at the Central European University. I am delighted to address you at the opening of this exhibition not only because I have the utmost honor and privilege to contribute a few items from my modest Soviet Afghan war collection, but also because my acceptance of this invitation from OSA was my way of saying “I STAND WITH CEU”.

In 1995, my Second World War US Army exhibition was opened by US Ambassador Donald Blinken. Little did I know that 22 years later an exhibition featuring items from my other collection would be hosted by the Vera and Donald Blinken Open Society Archives. In 1995 Ambassador Blinken delivered the formal opening address and, informally I myself said a few words. Then I and my son, who was 9 at that time, joined the Blinkens and we showed them around. I made a feeble attempt at talking about the most spectacular item in that exhibition, my 1944 jeep, but my son stole the show : he entertained the VIP guests with his stories about dinosaurs.

Ladies and Gentlemen, do not panic! I will not direct my remarks toward the mighty T-Rex or the velociraptors now… but only because my son lives abroad and the Blinkens are still in the US and will visit Europe later on this year, only.

As a matter of fact, I myself could talk a bit more passionately and with slightly more enthusiasm about the history, the culture, the peoples, the religion and the recent past of Afghanistan, a country I fell in love with a long time ago. I used to work there on several contract assignments and I tried to win the hearts and minds of the Afghans in many different ways. If I failed… and I must admit I failed a few times in my endeavors in Afghanistan, or in my projects with Afghans, I have no reason to blame the Afghans themselves… only the short-sightedness, the incompetence, the ignorance, the recklessness, the idiocy and stupidity as well as the criminal behavior of those who were supposed to fund my projects and who were supposed to guard and protect me along with my Afghan partners and my trainees and my students… only they stood in my way.

I wish to recognize the heroism of the shuravi, ordinary Soviet conscript soldiers who performed their internationalist mission with great idealism. I salute the common man in uniform and not the evil political regime that sent them overseas.

I marvel the bravery and determination of the Mujahideen who – in keeping with the age-old traditions of their tribes – closed their ranks and managed to stand up against a common enemy. Alas, they turned against one another as soon as the imminent threat of invasion by an alien force was eliminated.

My heart goes out to the millions of Afghan civilians whose lives were destroyed, whose future was literally stolen by warlords and religious fanatics, politicians and common criminals (close synonyms in a few isolated cases) among their own countrymen as much as by foreign powers that used Afghanistan as a venue for their power struggles.

Millions of Afghans, like the small Afghan family in this exhibition, were forced to leave their homes and their country during the Soviet occupation and in the subsequent years of civil war… they found refuge in neighboring countries, primarily in Iran and Pakistan, where the overwhelming majority of them were treated as genuine asylum seekers.

By the way, yesterday, June 20th was World Refugee Day.

Some politicians and some governments should come to their senses at last… and they should follow in the footsteps of those who treated… and who treat refugees as human beings. This happens to be the primary message of this exhibition… as far as I’m concerned.
I intended to raise all visitors’ awareness of the human cost of war, the terrible suffering of civilians in a war zone.

The soviet soldier in the first days of the Soviet invasion in early January, 1980 on patrol outside Kabul and the mujahid warrior from the last phase of the war, days after the Soviet pull-out, whose BMP-1 armored fighting vehicle broke through the gates of the Grain Silo in Pul-e Khumri, Baghlan Province and sent the bilingual “onward to the attainment of the great objectives of the Saur revolution” sign crashing down to the muddy ground provide an imaginary frame for the 9 years of Soviet occupation.

I wish to grab this opportunity to express my gratitude to OSA for inviting me to be their partner in this exhibition, may I thank the OSA team with specific regard to Mr. András Mink for implementing an initially vague idea of a Soviet-Afghan war exhibition in a remarkably professional manner… and special thanks to my muse, namely Kati, my wife for guidance and encouragement along the long and rather bumpy road to building and subsequently to presenting a collection like mine.

All items in this exhibition are either mentioned in my 2013 fiction book Zarbalistan, or photos and detailed descriptions of them are presented in Soviet and Mujahideen Uniforms, Clothing and Equipment in the Soviet-Afghan War, … in Contractor Gear, … or in my upcoming collectors’ guide entitled Soviet and Mujahideen Small Arms and Light Weapons in the Soviet-Afghan War, i.e. my militaria books on the Schiffer label.

In conclusion, may I follow closely in the footsteps of the Counselor to the President of the United States of America and… abuse… this formal event to promote my private business interests in true Kellyanne Conway style. I have to twists her words around a little bit:

“Go buy Zammis Schein books is what I would say,” “I’m going to give a free commercial here: Go buy them today, … everybody; … you can find them in the CEU bookstore, or online.”

If you want to get a true taste of Afghanistan, go and try the burqa on, it’s in the corner. It’s an unforgettable experience.

Enjoy your visit to the exhibition, which is open now.